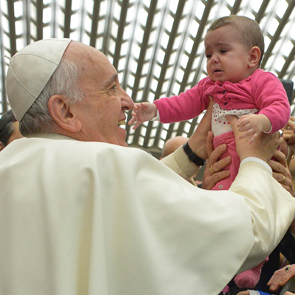 Pope says choosing not to have children is selfish

The Pope has told Greece’s Catholic bishops to maintain “constructive relations” with the newly elected Government headed by the far-left party Syriza.

Pope Francis urged the prelates on their ad limina visit to fight the “culture of pessimism” in crisis-hit Greece. He said: “In the face of the persistent economic-financial crisis, which has hit your country in a particularly harsh way, do not tire of exhorting all to trust in the future, opposing the so-called culture of pessimism.”

Francis told the prelates: “It is important that you maintain constructive relations with the authorities of your country, as well as with the different components of the society, in order to diffuse this perspective of solidarity, of an attitude of dialogue and collaboration also with other European countries.”

He also reminded them to encourage Greeks to be “hospitable” towards migrants, whom border officials are accused of illegally deporting without offering the chance to request asylum. Francis called on Greeks to be “open to the cultural and spiritual values of which numerous migrants are bearers, in a spirit of sincere hospitality toward these brothers and sisters, regardless of race, language or religious creed.”