Archbishops to receive pallium in their dioceses

Pope Francis has decided that archbishops will from now on receive their pallium in their home dioceses rather than at the Vatican.

Having the public ceremony of investiture for Metropolitan Archbishops on the ground "will greatly favour the participation of the local Church in an important moment of its life and history,” Mgr Guido Marini, the Master of Ceremonies of papal liturgies wrote in a letter to archdioceses.

He said Pope Francis believes that this new tradition will help to foster “synodality" which is "particularly urgent and precious at this time in the history of the Church,” the Italian newspaper La Stampa reported.

Mgr Marini emphasised that the pallium, a white lamb's wool strip, worn around the neck, is a symbol of “the bonds of hierarchical communion between the See of Peter and the Successor of the Apostle and those who are chosen to carry out the episcopal ministry as Metropolitan Archbishop of an Ecclesiastical Province.” 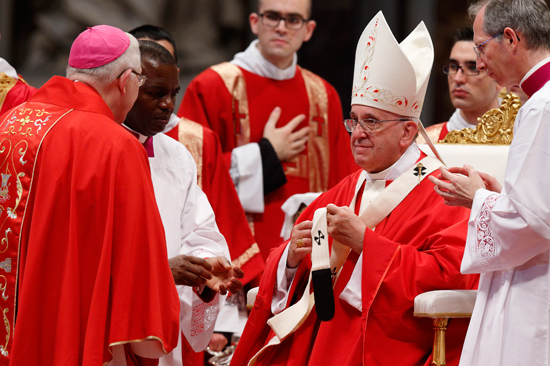 Nuncios, the pope’s in-country representatives, will bestow the pallium on archbishops instead, “on an opportune date” for the local Church.

Francis will continue to bless the pallium during the Mass on the feast of Saints Peter and Paul, 29 June, in the Vatican and will confer the vestment on the archbishop “in a private manner” the note said.

The papal Master of Ceremonies also stated that the new Metropolitan Archbishops “are invited to concelebrate” the 29 June Mass with the Pope, and they would receive the pallium “in a private manner, from the hands of the Holy Father” before returning home for the ceremony in their own dioceses.

The pallium dates back to the fourth century and is the oldest symbol of the bishops' office.