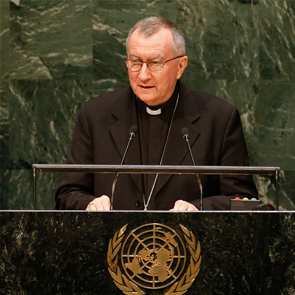 The Vatican is to become more involved in international politics, its most senior diplomat has said.

Cardinal Pietro Parolin, the Vatican Secretary of State, told journalists in Rome this week that: “With all the conflicts in the world today, we can’t just wait.”

He added that there was an urgent need to propose solutions for peace.

The Cardinal added that he expected Pope Francis to address the United Nations in New York during his September visit to the United States for the World Meeting of Families in Philadelphia.

He told the Catholic News Agency today: “I think the Pope will go to United Nations, everybody is speaking about that… but no official announcement has been delivered.”

He said that a visit to Washington DC was also being considered.

Elsewhere he defended the Pope’s decision not to make any Americans cardinals in the forthcoming consistory.

“I think the Holy Father wants to give a broader sense of the universality of the Church, giving a privilege to places where traditionally there is not so much attention by the Church,” the cardinal said.

He added that “we have to change our mind a little bit, and consider that the Holy Father’s criteria (in picking new cardinals) are not against anybody.”

Last year a senior Obama administration official revealed that Pope Francis had been a key player in the US and Cuba’s agreement to move towards a normalising of relations.