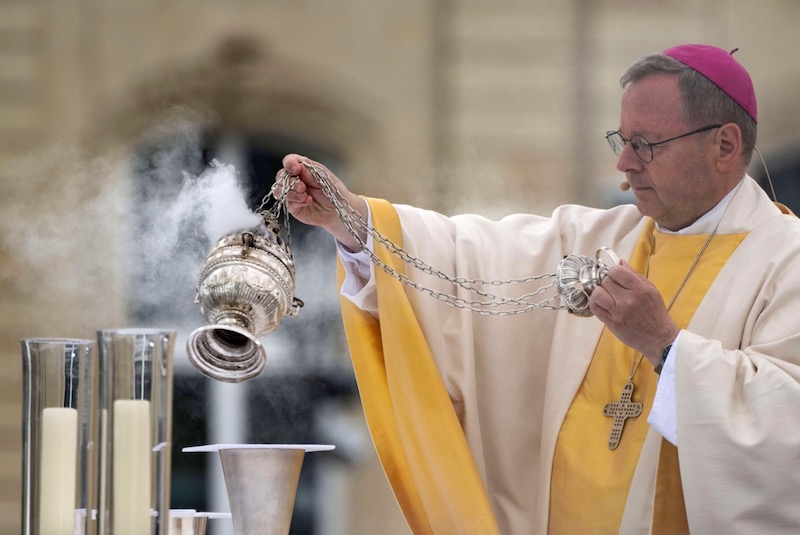 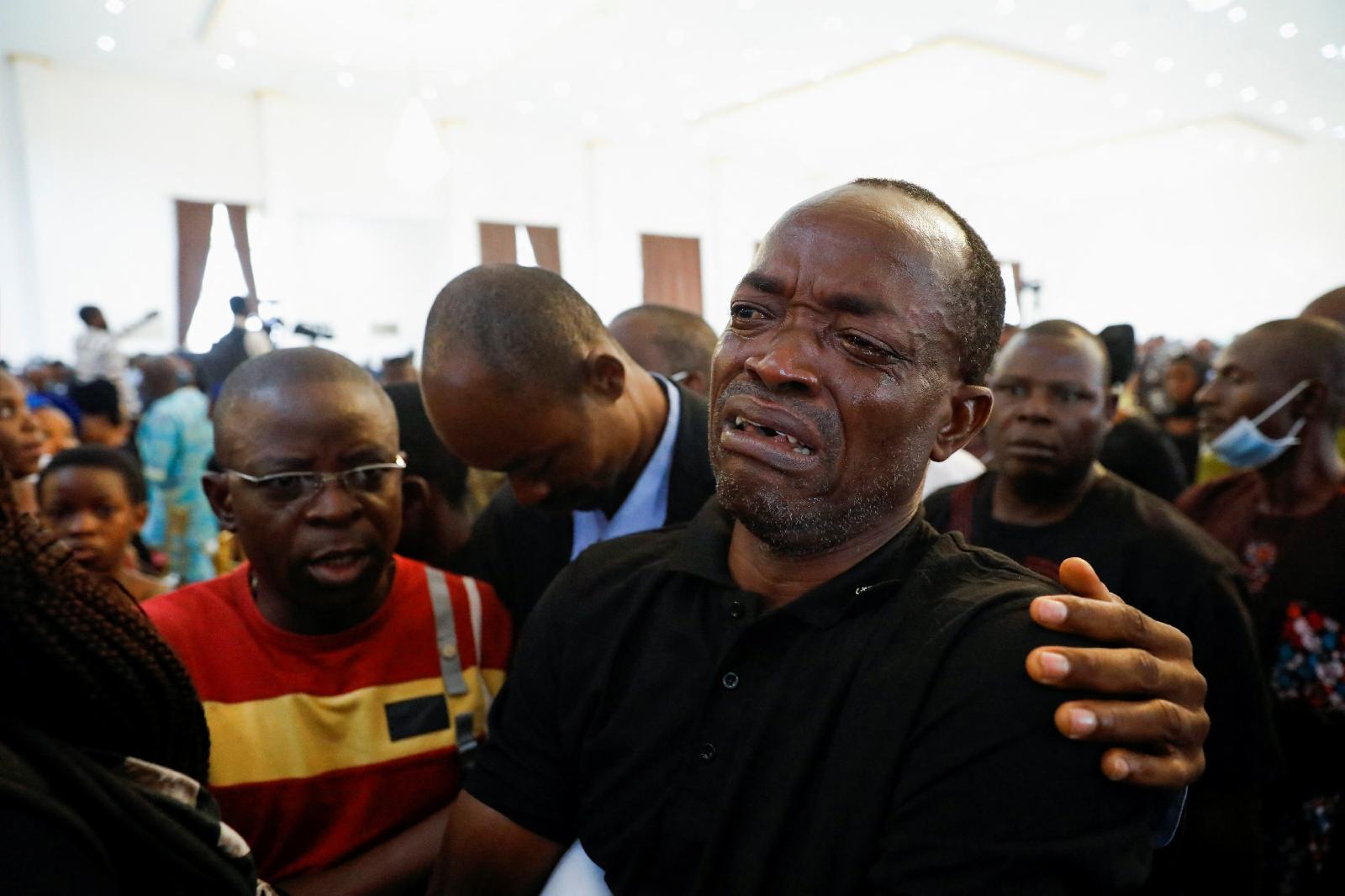 A man cries during a funeral Mass in the the parish hall of St Francis Xavier Church in Owo, Nigeria.
CNS photo/Temilade Adelaja, Reuters

Catholic bishops in Kenya have called for fair, free and peaceful elections as Kenyan voters prepare to go to the polls on 9 August. In a 5 June press statement, the bishops said: “We advocate for innovative development from the candidates that will spur growth and offer job opportunities for our unemployed youth; provide accessible and affordable medical care for all; support sustainable food production; those who show care for the environment and those who will promote systems that bring inclusivity in the financial sector.”  The bishops have committed themselves to issuing peace messages every week between now and the election. “We, the Catholic bishops propose to accompany Kenyans towards the August 9 poll, by offering short weekly reflections every Sunday on pertinent issues during the electioneering period,” they promised. “In these difficult times, we wish to address to you every Sunday a simple message to help us walk this journey to the General Elections, with clear minds, clear conscience and readiness to safeguard the peace and unity of our country.”

A group of Catholic nuns have been beatified as martyrs in Poland 77 years after they were murdered by invading Russian soldiers, in what a Vatican cardinal said presented parallels to current conditions in Ukraine. “Their selfless and heroic love was so great that they held back even when escape would have offset the greatest risk, as the Red Army's approach brought news of brutalities and atrocities,” said Cardinal Marcello Semeraro, prefect of the Congregation for Causes of Saints. “Their martyrdom is reminiscent of the situations we face today in twenty-first century Europe, amid similar scenes of violence, bitter cruelty and unjustified hatred.” The cardinal was preaching in Wroclaw cathedral at the beatification Mass for ten members of the Order of St Elizabeth, killed by Russian troops during their victorious 1945 sweep through western Poland. He said the Pope had paid tribute to the generous stance of Poles against the "brutality, barbarism and injustice" being witnessed in Ukraine, which paralleled the "devotion and faithfulness" shown by an earlier generation in the final stages of the Second World War.

“Nigeria is bleeding,” and “Nigerians now live in fear and anxiety, as a dark cloud of uncertainty hangs over the nation”, the head of the Bishops’ Conference said last week. Archbishop Lucius Iwejuru Ugorji of Owerri lamented the Pentecost Sunday killings in a Catholic Church and a spate of clergy kidnappings. Then he flagged up the country’s general elections in 2023, inviting people, “to avoid apathy and indifference and stand together to elect only credible candidates with character, competence and capacity; candidates with proven records of achievements and who are known for putting the common good above their private and selfish interests.”

The Vatican has announced the postponement of Pope Francis’s forthcoming visit to South Sudan and DR Congo due to the Pope’s health problems. The trip was due to take place from 2-7 July and he was expected to be accompanied by leaders of the Anglican and Presbyterian Churches. The Holy See Press Office said on 10 June: “At the request of his doctors, and in order not to jeopardise the results of the therapy that he is undergoing for his knee, the Holy Father has been forced to postpone, with regret, his Apostolic Journey to the DR Congo and to South Sudan.”

The Iraqi Shia leader Muqtada al Sadr, leader of the 73-strong al-Sadr bloc, the biggest in parliament, has announced the expansion of the work of a committee set up last year to return property illegally expropriated. Rightful owners are primarily Christian families or the religious community of the Mandaeans. More than 120 properties - land and houses – were returned to Christian citizens and Mandaeans earlier this year. Muqtada al Sadr acknowledged the growing number of complaints, including many from the mass exodus of Iraqi Christians after 2003, following the US-led military invasion. The lawmakers from his bloc resigned on Sunday, in a move ostensibly designed to end eight months of political paralysis.

The Greek Orthodox Patriarchate has denounced the occupation of its property in the Old City of Jerusalem by a radical Jewish organisation as “trespassing”. The “trespassers” claimed that the property belonged to King David and they broke locks to enter on 6 June. “It was a provocation in the week leading to holy services taking place at the site as we remember the arrival of the Holy Spirit and growth of the church through Pentecost,” said the Patriarchate.

The head of the Eastern-rite Syro-Malabar Church in India has expressed concern over the likely eviction of families from wildlife sanctuaries and parks in the southern state of Kerala. On 3 June India’s Supreme Court declared all places within a kilometre of protected forest areas as eco-sensitive zones, with no new permanent structures permitted. Cardinal George Alencherry warned on 9 June that the order could displace nearly one million people in Kerala alone. “Environment protection has always been the policy of the Church,” he said, “but imposing the entire burden of environmental protection on those living in regions bordering the forest is unfair”.

Hong Kong’s outgoing chief executive delivered a defiant final speech to the legislature on 9 June, saying she was “not ashamed” of her record after her five-year tenure. Carrie Lam  faced criticism over the handling of pro-democracy protests, Beijing's draconian national security law and Covid. Carrie Lam departs at the end of June, to be succeeded by another Catholic, John Lee. In her speech, Lam said her term marked the “most difficult” period in Hong Kong's post-handover history. She felt Hong Kong's governance had improved after Beijing intervened to put “patriots” in power.

Bishops in South Korea are pursuing the canonisation of 81 Catholics who were martyred by communist forces during the Korean War. The bishops’ Commission to Promote Beatification and Canonisation, meeting on 7 June, agreed that the candidates were “witnesses of modern and contemporary faith” of the Korean Church. Sainthood candidates include Bishop Francis Hong Yong-ho of Pyongyang, 49 priests, seven religious and 23 laymen who were killed by communist forces before and after the 1950-53 Korean War. In 2014, they were declared Servants of God, marking the official beginning of the canonisation process.

A caravan of around 7,000 migrants headed to the US-Mexican border was disbanded last weekend by Mexican immigration authorities. The migrants – from Central America, Venezuela, Haiti and other countries – were given migratory documents that accredited their stay in Mexico. However, many were still hoping to continue their journey to the US.

A bishop serving a sentence of four years and a half in an Argentinian prison for sexually abusing two seminarians, is now hospitalised in a private clinic, reportedly due to high blood pressure. His lawyer has asked for him to serve the rest of his sentence under house arrest in a local monastery, due to his health problems. The Bishop Emeritus of Orán, Gustavo Zanchetta, 57, was convicted in March in a major blow to Pope Francis, who had initially defended him. The Vatican has not yet released information regarding the canonical process or determinations reached regarding Zanchetta.

The commission representing the European Union’s Catholic bishops has denounced a European Parliament resolution declaring abortion a “fundamental right”  and urging the United States not to introduce new restrictions on abortion. “This is an unacceptable interference in the democratic jurisdictional decisions of a sovereign state”, the Brussels-based commission, COMECE, said on 8 June. “There is no recognised right to abortion in European or international law,” the commission added. COMECE said caring for pregnant women was “a central part of the church’s diaconal ministry” and should also be “a duty exercised by our societies.”

Peru’s Episcopal Commission for Social Action (CEAS) has written to delegates attending the 2022 Convention of the Prospectors and Developers Association of Canada, held in Toronto from 13-16 June, criticising destructive mining. Bishop Jorge Izaguirre Rafael of Chuquibamba, president of CEAS, lamented that the Peruvian mining sector, in which Canadian companies play a major role, “has not brought the promised improvement in quality of life for most communities in the mining areas.” On the contrary, he said, “it has resulted in corruption and environmental pollution and has infringed on people’s rights to life and health, leaving behind social conflict, disease and even death.” He called on Canadian companies to conduct human rights and environmental assessments.