'Cultural Catholic' of humble origins to be Australia's next Prime Minister 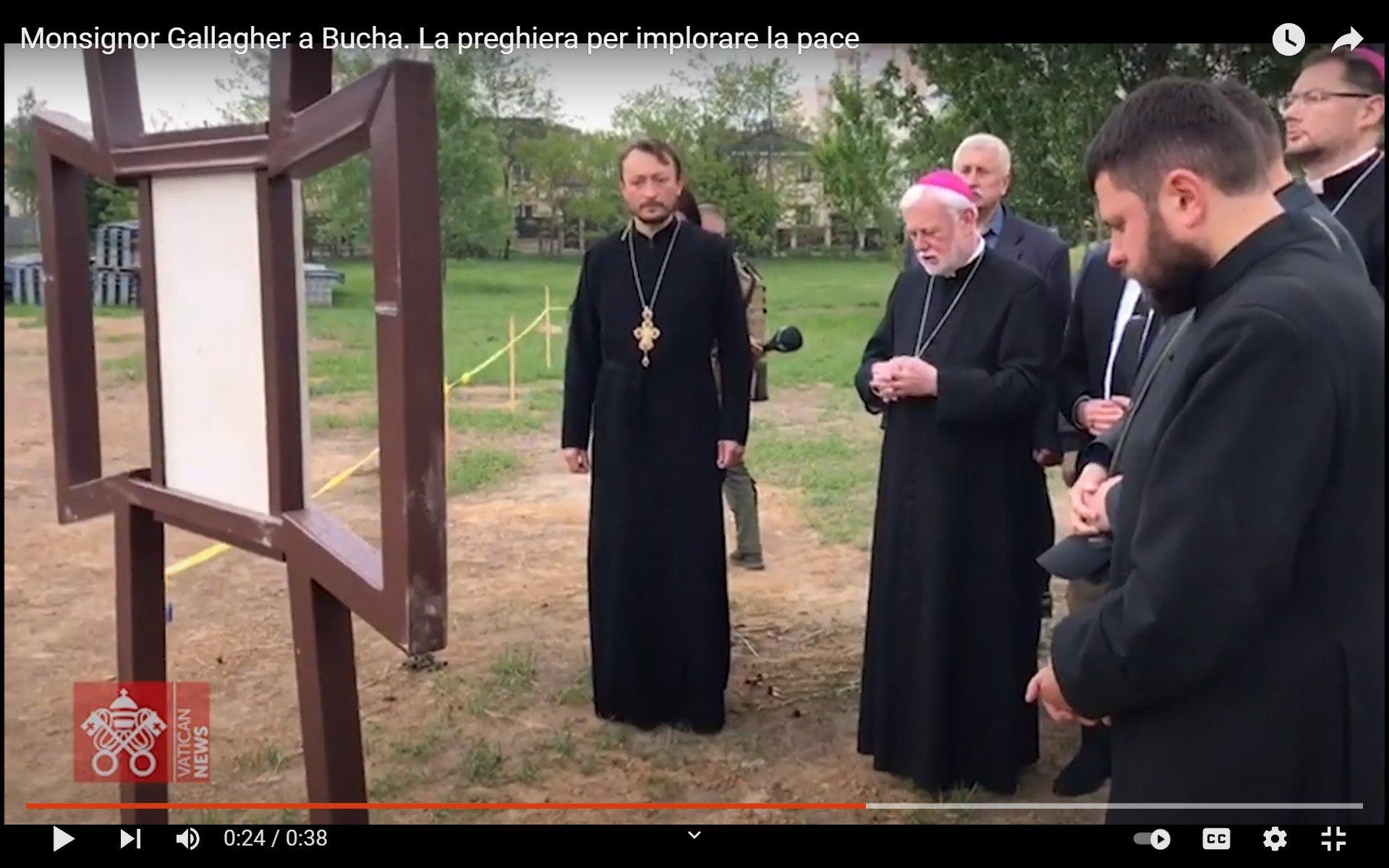 Archbishop Paul R. Gallagher, Vatican foreign minister, prays at the site of a mass grave near the Orthodox Church of St. Andrew in Bucha, Ukraine, May 20, 2022.
CNS photo/Vatican Media

The Vatican Secretary for Relations with States Archbishop Paul Gallagher met with the Ukrainian foreign minister in Kyiv on Friday, offering the Holy See’s aid in enabling a negotiation process to end the Russia-Ukraine war. Archbishop Gallagher said that his meeting with Ukrainian Foreign Minister Dmytro Kuleba on 20 May focused on “pondering the restoration of peace.” “The Holy See reaffirms, as it has always done, its willingness to aid a genuine negotiating process, seeing it as the just route to a fair and permanent resolution,” Gallagher said at a press conference following the meeting. Gallagher’s visit included stops in settlements not far from Kyiv at Bucha, Vorzel and Irpin. In Bucha he was shown photographs of the exhumation of a mass grave. “We are witnesses of the sufferings and martyrdom of this country,” he said. “My visit is intended to demonstrate the closeness of the Holy See and Pope Francis to the Ukrainian people, particularly in light of Russia’s aggression against Ukraine.”

Bishop David Malloy, chair of the US Bishops’ Committee on International Justice and Peace praised the Biden administration for its plans to end Trump-era restrictions on trade and travel with Cuba. “We commend the administration’s renewed interest in restarting US engagement with Cuba,” Malloy said. “Recognising that points of contention remain between our two countries, Cuba’s punitive isolation has not produced the economic and social change that the United States has sought to effect.” He added that “the lifting of onerous remittance limitations, will strengthen familial, economic and social ties between our countries”.

The Archdiocese of Santa Fe announced a $121.5 million settlement with 375 victims of clergy sex abuse. The archdiocese also agreed to create an archive of materials related to clergy sex abuse. “The church takes very seriously its responsibility to see the survivors of sexual abuse are justly compensated for the suffering they have endured,” said John C. Wester, Archbishop of Santa Fe. The archdiocese has been in bankruptcy proceedings since 2018, largely on account of the need to settle sex abuse claims.

Tributes poured on to social media as it was announced last weekend that feminist theologian Rosemary Radford Ruether had died in California at the age of 85. She wrote hundreds of influential articles, such as “Ecojustice at the centre of the Church’s Mission”, and 36 books including Sexism and God-Talk in 1983 and the “ecofeminist primer”, Gaia and God in 1992. Ruether was a supporter of the Women’s Ordination Conference and the Women-Church movement. “My Catholicism is the progressive, feminist liberation theology wing of Catholicism,” she once said.

Paraguay’s bishops organised three days of prayer, fasting and symbolic action for peace and respect for life after a mayor and a prosecutor who fought organised crime were shot dead in recent weeks. Between 20 and 22 May peace prayers were said at every Mass, people were invited to fast “in solidarity with those who lack daily bread” and to light candles “to show that only the Risen Christ can draw us out of the darkness of violence and death”.

The Middle East Council of Churches (MECC). has said, “the storms of history will not extinguish the presence of Christians in the lands of Jesus.” Meeting on 15-20 May in Egypt, the assembly, which brought together patriarchs, bishops and other representatives of the Churches and ecclesial communities present in North Africa and the Middle East, expressed sadness at the massive emigration of young people which is weakening Christian communities. It thanked Egyptian President Abdel Fattah al Sisi, who told the gathering that “Christian brothers and sisters, in all Arab countries, are an integral part of the fabric of all Arab society”.

The Bishops of Costa Rica met the new President of the Republic last week to reiterate the will of the Church to contribute to the construction of Costa Rica. “We had a frank and sincere dialogue, seeking to unite our efforts for the common good of our society,” said bishops’ conference president Bishop José Manuel Garita Herrera of Cuidad Quesada, after meeting President Rodrigo Chaves Robles. The bishops suggested priority issues included social inequality and the economic crisis, and presented Church work in its pastoral, social, educational and family ministries.

A group of Catholic educators in the Philippines has voiced fears the incoming administration could attempt to rewrite history in schools by whitewashing abuses committed during the martial law years of late dictator Ferdinand Marcos. In a 19 May statement signed by Archbishop Rolando Tria Tirona of Caceres, the Catholic Educational Association of Caceres and Libmanan – covering Catholic schools in the two dioceses - warned winning candidates in recent elections not to use the education sector to distort history. President-elect Ferdinand “Bongbong” Marcos, Jr., the late dictator’s son, and his running mate, Sara Duterte, daughter of outgoing president Rodrigo Duterte, were accused of trying to rewrite history during the campaign.

Bishop Rolando José Álvarez Lagos of Matagalpa, Nicaragua, has gone on indefinite hunger strike in protest against police following his every move.

Bishop Alvarez is a stern critic of President Daniel Ortega's Sandinista Government, which has arrested dozens of opposition politicians, and he is demanding the release of all political prisoners. He says that he will continue his hunger strike until the police, who have told him they are only obeying orders, promise to respect his privacy and that of his family.

Pauline Jaricot (1799-1862), the founder of the Society for the Propagation of the Faith, was beatified in Lyon on 22 May. Speaking after the Regina Caeli prayer in St Peter's Square on Sunday Pope Francis said: “May this beatification be an occasion for a greater rooting of all in charity and for a renewed impetus in the common journey of each one towards holiness.” He appointed Cardinal Luis Antonio Tagle, Prefect of the Congregation for the Evangelisation of Peoples, to preside over the beatification. The ceremony took place during the year marking the 200th anniversary of Jaricot’s founding of the Society for the Propagation of the Faith, the oldest of the four Pontifical Mission Societies (PMS) whose general assembly was held in Lyon on 16-23 May. “As a laywoman committed to supporting the missionary activities of the church, she reminds us that holiness is not confined to those in holy orders or members of religious congregations,” Fr Brian Lucas, National Director of PMS’s Australian partner Catholic Mission, said.