Many laity find Catholic Church to be 'judgemental and condemning'

Many laity felt that the Church, rather than leading society in terms of justice, was actually undermining its own moral legitimacy. 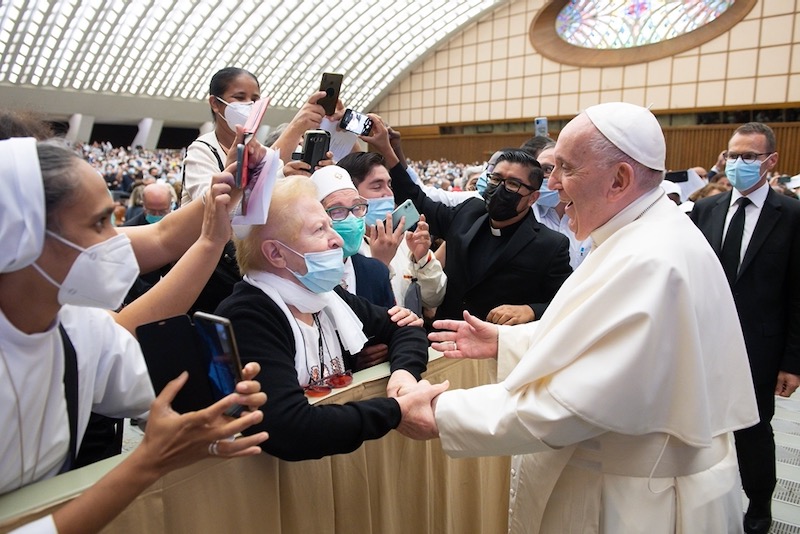 This is the first time the people of God have been consulted since the Council of Jerusalem, and early reports are in.
CNS photo/Vatican Media

A team of vocational, missional and catechetical experts has been put together to draw up a synthesis of reports from the dioceses of England and Wales from the synodal process so far.

Earlier this year, laity were invited to meet and discuss issues within the Catholic Church in a “listening” process that is part of the build up to the Synod on Synodality called by Pope Francis and scheduled to take place next year

The diocesans syntheses were submitted to the bishops on the Friday before Holy Week and a national synthesis team has started work drafting the final document for England and Wales that will be sent to Rome by 15 August this year.

According to an initial analysis of the diocesan reports for The Tablet there is a “sense of the unity of voice” with which the Catholic laity have spoken.

“The emergent themes might have been penned even before the synod was called: the role of women, poor communications, insufficient effort to engage the youth, says Frank Callus, chair of A Call to Action, which promotes respect and dialogue in the Church. He reports that there are substantial reason to be hopeful of the outcomes of the synodal process.

However, inevitably, serious issues have surfaced already that will need to be addressed.

Callus writes in a Tablet blog: “In that sense, at least, the synod has confirmed what we already knew. And that, paradoxically, is not what the synod was about. It was not a popular vote for changing the Church or an opportunity to beat those who occupy a different part of the bandwidth that is modern Catholicism. It is a prayerful, reflection on what God is calling us to be. What has been produced is the first iteration, the first utterance of a plea for a Church closer to the Gospel, more in tune with the Sermon on the Mount.”

In a large number of synod responses there was a strong sense that the Church must be there for all. However, many laity expressed the view that the Church appears to be judgemental and condemning and that there should be more focus on commonalities with others rather than differences.

Too often, the Catholic Church was seen to be censorious. The laity called for a more tolerant attitude towards those deemed to be in irregular relationships, and members of the LGBTQ+ communities

“It seems that the laity are providing the lead for the bishops in shaping the Church towards the model of the field hospital envisioned by Pope Francis,” writes Callus.

It was felt by many that the Church generally does not react well to change, with authority and decision-making held centrally. There were examples of this at all levels, from the institution of the new translation of the Mass and banning the Extraordinary Rite, to individual pastoral decisions by priests.

Callus also describes from the diocesan reports a general sense that the Church has lost her voice in the public square. In addition, an issue that appeared in almost every diocesan report was that of the development and formation of the laity. “The laity and clergy of England and Wales were ill-prepared for this synodal process, and the last few months have demonstrated a lack of knowledge and understanding of some basic elements of ecclesiology.”

The place of women in the Church and particularly in terms of leadership roles and ministry was evident in the vast majority of reports. “In a western European society that has had equality legislation for a half century, the Church’s position on women was seen as anachronistic and damaging. The vast majority of the laity that contributed to synodal discussions felt that the Church rather than leading society in terms of justice was actually undermining its own moral legitimacy.”

The clerical sexual abuse scandal was referred to in the vast majority of reports. “The impact of it on the Church was still being felt and many regarded it as having caused incalculable damage. In almost every case, the issue was set out as a separate statement within the report. It was often represented both as a cause for many leaving the Church and for difficulty in executing the Church’s primary role in evangelisation,” reports Callus.

His analysis comes after the first meeting of the national synthesis team in April. The team’s initial findings were presented to the bishops at their meeting in Cardiff last week.

A national synod gathering of bishops and lay people who helped produce the submissions will take place in St George’s Cathedral, Southwark soon, when a first draft of the national synthesis will be considered.

Members of the national synthesis team are Sarah Adams, director of the department for adult education and evangelisation for the Clifton diocese, Dominic Belli of Menevia, papal biographer Dr Austen Ivereigh, Dr Mary McCaughey, lecturer in theology at St Mary’s College, Oscott, Dr Mark Nash, director of the agency for evangelisation and catechesis for Southwark,
Rev Jan Nowotnik, director of mission for the bishops’s conference,  Sr Elaine Penrice FSP, Daughter of St Paul and director of the national office for vocation, Canon Christopher Thomas, general secretary of the bishops’ conference, Kate Wilkinson of Liverpool and with episcopal oversight from Archbishop of Southwark John Wilson and Bishop of Leeds Marcus Stock.