Catholic bishops urge Russians to 'turn away from evil' 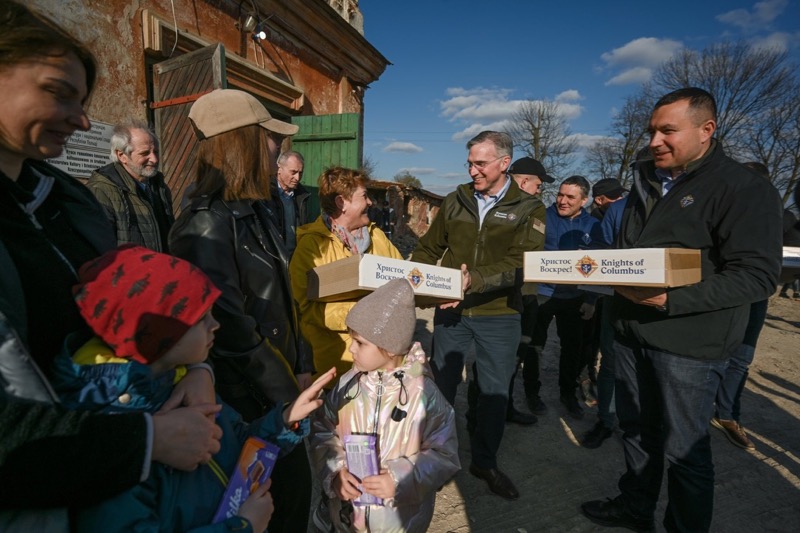 Ukraine’s Catholic bishops have urged Russians to free themselves from evil forces, as representatives of Europe’s Catholic, Orthodox and Protestant churches paid tribute to those offering “support and solidarity” to those in need.

“Those who count themselves a Christian nation have erased the Gospel through their actions, abandoning the commandment to love God and neighbour. This is why, in Holy Week, we ask for restraint and condemnation of the war by all those who still have some sense of faith in Russia,” Ukraine’s Latin-rite bishops said in a weekend message.

“Your only way to salvation lies in turning away from evil … With this appeal, we turn, as Ukrainian Catholics, to the Russian nation. Do not let evil become your deity.”

The message was issued as tens of thousands of Russian troops massed for a fresh drive against eastern Ukraine after being pushed back with heavy losses from areas around Kyiv, where Ukrainian officials said remains of more than 1,200 civilians had been found in the past fortnight.

The bishops said recent events in the town of Bucha and elsewhere had “revealed the true face of the aggressor” and provided “traces of genocide”. The bodies of large numbers of civilians were discovered in mass graves in the town.

They added that Ukrainians should still “look to the future with hopes of victory”, despite experiencing a “real Golgotha”, and said they were grateful to the “dedication and courage” of their country’s armed forces and medical personnel, as well as to those worldwide who offered help to the 4.5 million refugees abroad and the 6.5 million displaced inside the country.

Meanwhile, the head of Ukraine’s Greek Catholic Church, Archbishop Sviatoslav Shevchuk of Kyiv-Halych, said on Monday that Ukraine was “surviving and fighting” despite “pain, blood, suffering, human tears and mass murders”, adding that queues were still forming outside army recruitment centres for those “wishing to defend the homeland”.

Speaking on Monday, after hosting Kyiv visits by the British prime minister, Boris Johnson, and the European Commission’s president, Ursula von der Leyen and foreign policy chief, Josep Borrell, President Volodymyr Zelenskiy said it was likely tens of thousands had died in the besieged southern port of Mariupol, and warned that savage fighting was expected in the east with the new Russian offensive.

Caritas-Spes, the charitable arm of the Latin-rite Catholic Church in Ukraine, said this week that seven people died in its Mariupol office on 15 March when it was struck by a Russian tank. Two of the dead, as yet unidentified, it said were Caritas employees.

In a weekend statement, the Papal Academy of Sciences warned of heightened dangers of nuclear conflict brought by the “appalling, inhuman, sacrilegious and senseless war” in Ukraine. The Vatican’s Kyiv nunciature denied recent media reports that the Holy See had criticised arms supplies to Ukraine. It said “every state” had a “right to defend itself” and an early April interview by Secretary of State Cardinal Pietro Parolin with Italy’s ACI Stampa had been “widely misquoted”.