Pope Francis celebrated his 78th birthday this morning with a very different kind of papal audience – one that started with him blowing out candles on a cake and ended with thousands of pilgrims dancing the tango in St Peter’s Square.

On his way through the square the Pope stopped to drink a sip of the Argentinian drink maté handed to him by someone in the crowd, and to blow out the candles on the birthday cake offered to him by a group of seminarians from the Legion of Christ.

Afterwards, wrapped up in coats and scarves in the cold Roman morning, a sea of professional dancers and pilgrims attending the Pope’s Wednesday morning audience danced around the Christmas tree in front of St Peter’s Basilica, as tango music played. Some 2,400 people took part in the tango “flashmob”. 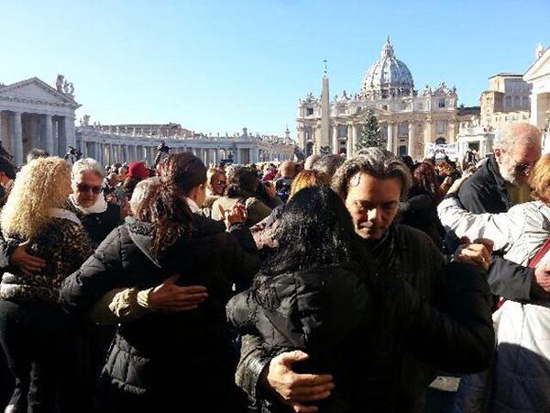 Pope Francis, a fan of the dance which originated in Argentina, did not mention his birthday during the audience and will follow his usual schedule for the day.