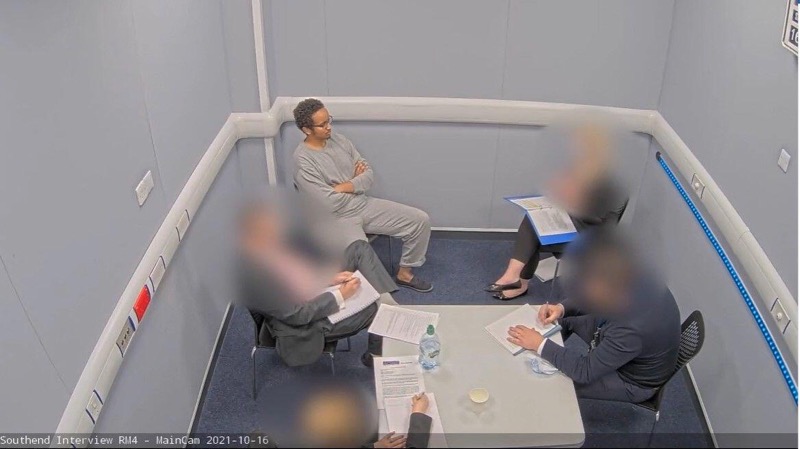 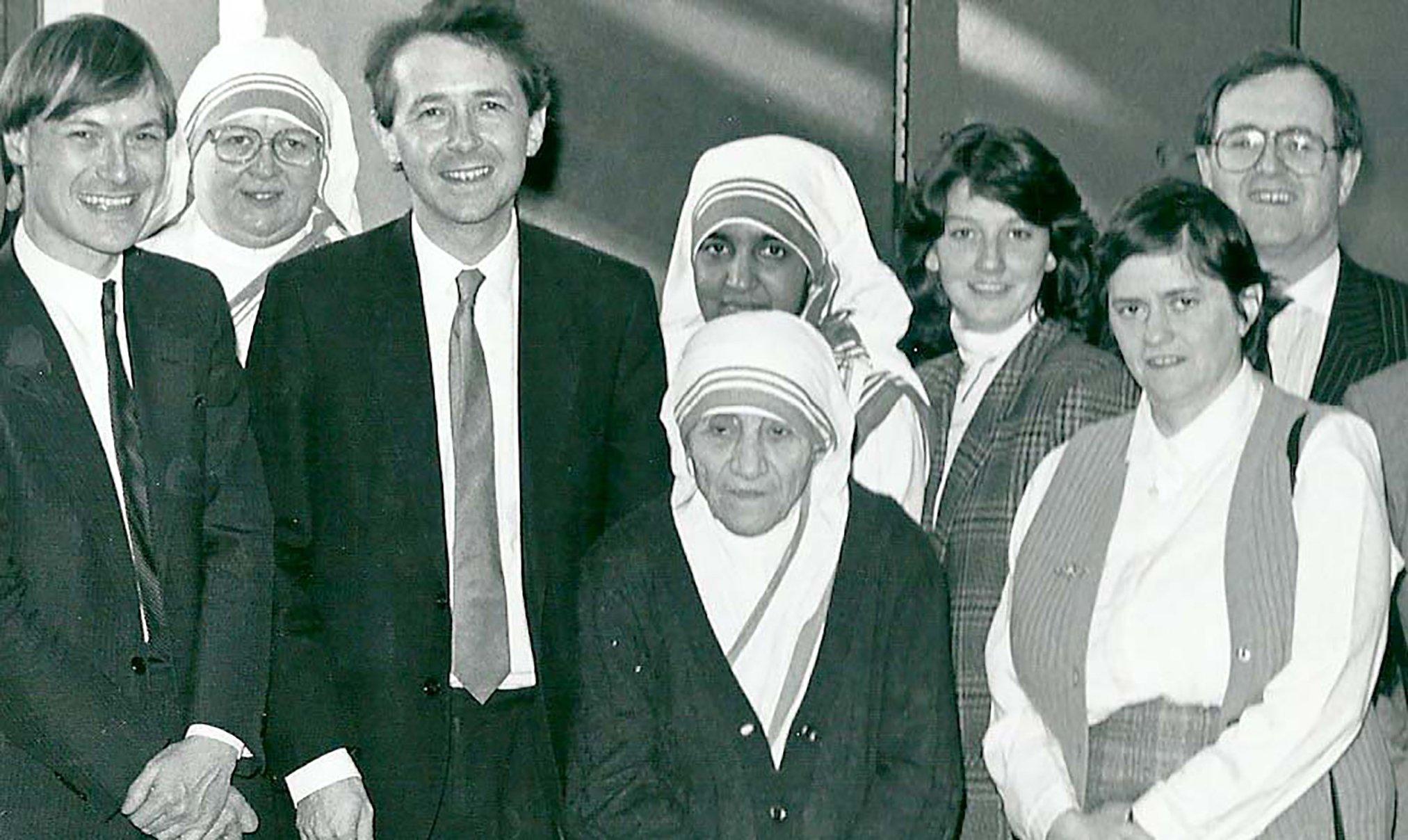 David Amess, farthest left, with a group that includes Mother Teresa in Parliament in this 1988 photo.
CNS photo/courtesy Lord Alton of Liverpool

The man accused of murdering Sir David Amess was found guilty on Monday. Ali Harbi Ali stabbed the Southend West MP to death on 15 October last year at a constituency surgery in Leigh-on-Sea.  The jury at the Old Bailey deliberated for just 18 minutes before convicting him of murder and preparing acts of terrorism.  He refused to stand in the dock as the verdict was returned, on “religious grounds”. The judge, Mr Justice Sweeney, said that Ali had no legal defence. He thanked the jury, saying: “It cannot have been easy to listen to the evidence that you listened to.”

Three Catholic LGBTQ organisations have joined more than 100 groups in the United Kingdom who withdrew their support from a government-run LGBTQ conference that has subsequently been cancelled Quest, LGBT+ Catholics Westminster Pastoral Council, and the Global Network of Rainbow Catholics all joined a boycott statement from the network LGBT+ Consortium that endorses a decision by Stonewall to boycott the government’s Safe To Be Me conference that was planned for June. The statement explains: “The UK Government’s plans to scrap legislation outlawing conversion practices were abhorrent. What made the situation worse was a quick U-turn that actively excluded our trans siblings, and we refuse to stand by and let this happen.”

Cardinal Vincent Nichols was amongst the attendees of an historic interfaith Iftar at the Tower of London last week, the first such celebration in the Tower’s 900-year-history. The iftar, or evening meal, held in the first week of 2022’s Islamic holy season of Ramadan, included high-profile attendees including Sadiq Khan, the Mayor of London,  Ephraim Mirvis, the Chief Rabbi, and the Anglican Bishop of Willesden, Lusa Nsenga-Ngoy. In his speech to the gathering – organised by interfaith charity the Naz Legacy Foundation – Cardinal Nichols criticised the contemporary prevalence of consumer culture. “Live simply,” Nichols said, “so others can simply live.”

The Carmelite order has left a parish in Pantasaph, North Wales, after over 150 years of ministry there. St David’s Church, built in 1852, was one of the first Catholic churches in the area since the Reformation and a famous centre of Welsh Catholicism, at one point being redesigned by Auguste Pugin. The parish has been bought by the Vincentian order and will remain open, as will the National Padre Pio Peace Centre, a shrine and retreat centre established by the Carmelites more than four decades ago. Citing their declining numbers as a congregation, the friars expressed their sorrow over the decision in a letter to parishioners, but expressed hope that “friars will be seen walking in the hills around Pantasaph for many years to come”.

The pilgrimage charity HCPT is resuming Easter pilgrimages after two years of virtual gatherings.  Around 600 pilgrims will head for Lourdes over the Easter weekend. All major liturgies will be streamed online and contacts invited to sign in for receiving a daily email, submitting prayer petitions, and collecting names for an HCPT memorial candle. Groups from Britain and Ireland will be joined by groups from Belgium, Poland, West Indies, US and Spain. For the first time since the autumn of 2019, the HCPT team in Hosanna House will be welcoming back groups between May and Autumn 2022.  In addition, Northern Cross pilgrims, after a two-year absence due to the pandemic, are once again carrying large Crosses from the Scottish borders and Cumbria to Holy Island, or Lindisfarne. The ecumenical Holy Week pilgrimage has a four-decade history. Groups of pilgrims walk from various places in Northern England and Scotland for between 70 and 120 miles, reliving the road to Calvary and sharing that witness with people along the way.

Pope Francis has appointed Monsignor John Mbinda CSSP as Bishop of the Diocese of Lodwar in Kenya. Mgr Mbinda, former Provincial Superior of the Congregation of the Holy Spirit in Kenya and South Sudan, has been serving as an assistant priest at Our Lady of Grace and St Edward in Chiswick, west London. He previously served at St Chad’s Church in South Norwood, a Spiritan parish in the Archdiocese of Southwark. He was born in1973 in Machakos in the diocese of the same name. After attending the Pope Paul VI Junior Seminary in the Diocese of Machakos (1989-1992), he entered the Congregation of the Holy Spirit, the Spiritans, making his perpetual vows on 12 October 2001.

A Co Laois parish priest has criticised the Church’s ban on same-sex blessings saying it is “one of the reasons why the level of practice among under the 60s is in freefall”. Fr Paddy Byrne was commenting on the wedding of Olympic boxing medallist Kellie Harrington and her wife Mandy Loughlin. He said it was sad that while he can bless tractors and cars, he cannot bless a loving same-sex couple. In his tweet, Fr Byrne described Kelly Harrington as “a national treasure” and said the boxer, who is also a healthcare worker, “encompasses and personifies all that Christianity is about”. Referring to the sense of exclusion many gay couples feel within Catholicism, he asked, “how can we continue to alienate these couples at such a happy moment in their lives and not offer at least some form of recognition – spiritual nourishment – and ritual?” Stressing that he was “not a maverick in any way”, he said people on the ground in the Church buy into the need to offer gay couples a ritual to mark their commitment. “I speak on behalf of the vast majority of the members of the parishes that I serve and particularly the younger members of those parishes. I speak on behalf of clergy as well. The majority of us find it not just disappointing but almost embarrassing that we cannot celebrate these occasions in our churches,” he said.

The world is “sliding backwards” on its climate commitments, Trócaire’s chief executive has warned. Responding to the findings of the latest IPCC Report, Caoimhe de Barra said the report must be a “clarion call” for urgent global action on climate change. She appealed to countries to “urgently reconsider their ill-advised reliance on fossil fuels, particularly in light of the Ukraine war which has pushed already high energy prices to record levels”. While there was still a window of opportunity to avoid the worst impacts of the climate crisis, the CEO of the Irish bishops’ development agency warned that this window is closing fast, with climate change impacting most on the poorest in the world, particularly women. “There are no two ways about it. A phase out of fossil fuels must begin now, not in 10 years’ time. It is crystal clear that if we continue on this path, the impacts will be catastrophic and will be seen in a massive loss of lives and livelihoods, mass displacement of communities, and a further breakdown in biodiversity, ecosystems and food security.” Ms de Barra said the Global South is bearing the brunt of climate impacts, including droughts, floods, famines, storms, sea level rise and death, even though it contributes least to climate change.

With 15,000+ responses from 97+ countries, Catholic Women Speak are doing the largest survey of Catholic women ever undertaken. They have now added Mandarin and Portuguese translations. The deadline for responses is 26 April. They are aiming for 20,000 responses. Fill out the survey at catholicwomenspeak.com.

Monks who work alongside people on the margins of society to feature on BBC radio this Easter Bank Holiday Weekend. The work of Passionist monks in inner-city England will feature in a BBC local radio programme, Keeping Faith at Easter, to be broadcast across the UK twice over the Easter Bank Holiday Weekend. The programme, which features stories of people whose faith is helping them make a difference in their communities, is being broadcast on 40 BBC local radio stations on Good Friday, 15 April, at 6am and again at the same time on Easter Sunday.

The Church’s approach to human rights provides “a vital resource” for contemporary politics and ethics and has the potential to make a unique contribution to the challenges we face today, Professor Linda Hogan of Trinity College Dublin has said. However, the chair of the college’s school of religion warned that the Church must resolve inequalities within its own practices to be persuasive on the principle of equality. Referring to the “blindspots” within the Church’s institutional practices in relation to gender and sexuality, she criticised the Church’s failure to address the gap between these practices and its embrace of human rights in the world.