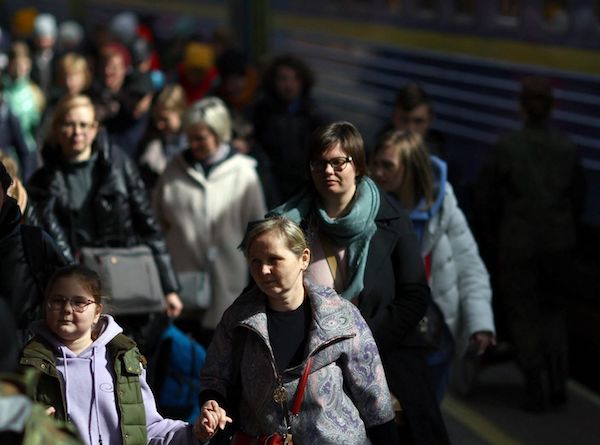 ROME / Pope prays in St Peter’s Basilica before statue of Our Lady of Fátima. 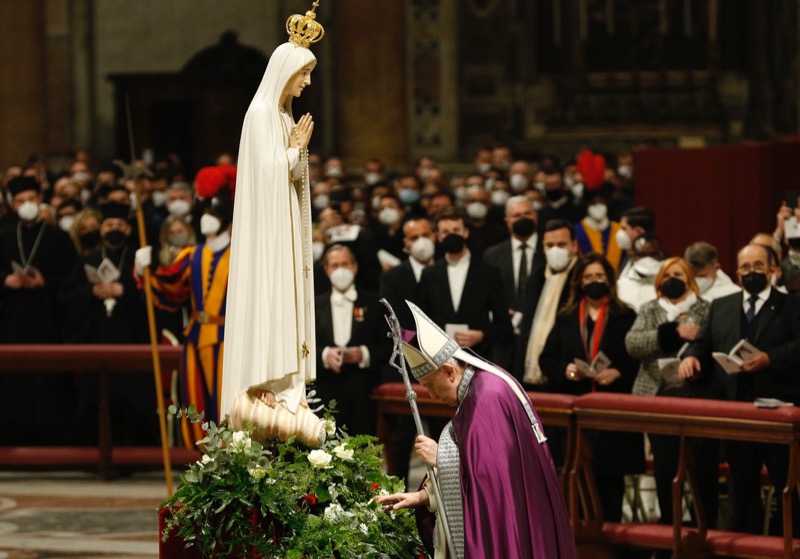 Pope Francis, on the Solemnity of the Annunciation of the Lord, at the end of a penitential service in St Peter’s Basilica, consecrated Russia and Ukraine to the Immaculate Heart of Mary. “Mother of God and our Mother, to your Immaculate Heart we solemnly entrust and consecrate ourselves, the Church and all humanity, especially Russia and Ukraine,” he said. “Accept this act that we carry out with confidence and love. Grant that war may end and peace spread throughout the world.”

The Pope’s decision to make the consecration was precipitated by the war in Ukraine, following the 24 February invasion of the country by Russia.

Seated before a statue of Our Lady of Fátima, Pope Francis said: “The people of Ukraine and Russia, who venerate you with great love, now turn to you, even as your heart beats with compassion for them and for all those peoples decimated by war, hunger, injustice and poverty.”

He continued: “Through your intercession, may God’s mercy be poured out on the earth and the gentle rhythm of peace return to mark our days.” Mary appeared in Fátima in1917 to three shepherd children, Francisco and Jacinta Marto – canonised by Pope Francis in 2017 – and their cousin, Lucia dos Santos.

Francisco and Jacinta died not long after the apparitions, but Lucia became a Discalced Carmelite and died in 2005, aged 97.

Among the messages she shared was the need to consecrate Russia to Mary’s Immaculate Heart, to prevent Russia’s “errors” – understood to be communism – spreading across the world. Previous attempts to make the consecration have been seen as ineffective because – unlike Friday’s – they were not accompanied by bishops across the world and did not mention “Russia” specifically.

The act of consecration was read simultaneously by Cardinal Konrad Krajewski, the papal almoner, at the Sanctuary of Our Lady of Fátima in Portugal.

In his homily, the Pope said that the consecration “is no magic formula but a spiritual act … an act of complete trust on the part of children who, amid the tribulation of this cruel and senseless war that threatens our world, turn to their Mother, reposing all their fears and pain in her heart and abandoning themselves to her”.

Lawyer and author of two books on Fátima, John Salza, said that the text of the consecration “does contain the necessary elements”.

Christopher Ferrara, another Fátima author, was hopeful that Francis’ text was sufficient. “With this latest attempt at a consecration of Russia there is reason for optimism,” he said. After leaving Portugal Cardinal Krajewski visited Ukraine for a second time, driving an ambulance donated and blessed by Pope Francis to Lviv, in the west of the country, to donate it to the municipal authorities. Cardinal Krajewski said he was making the trip “with all his faith” to “see the concrete consequences” of the act of consecration that united the Church worldwide.

Fr Kirill Gorbunov, vicar-general of the Catholic Archdiocese of the Mother of God of Moscow and spokesman for the Russian Catholic bishops, said that the consecration was an expression of deepest trust in, and devotion to, the Blessed Virgin Mary.