If everything goes according to plan, the image will be transported from Lisbon to Krakow, and from there to Lviv. 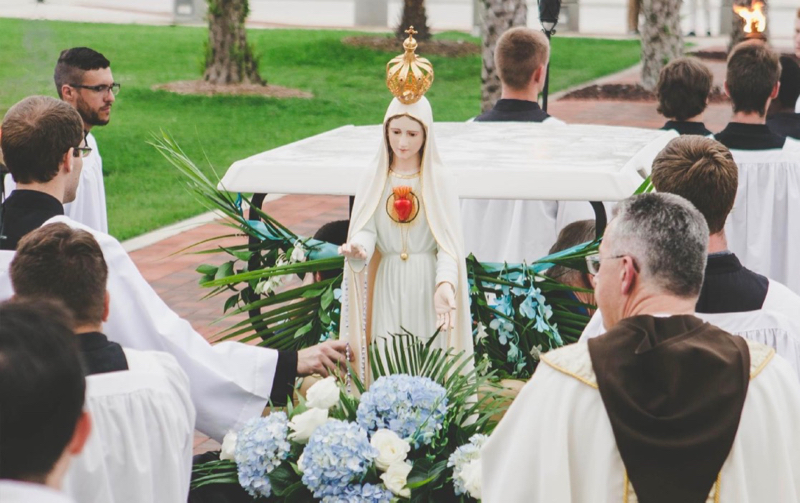 Clergymen walk with a statue of Mary in Ave Maria, Florida
CNS photo/Courtesy of FOCUS

The Marian Shrine of Fátima, in Portugal, has sent a pilgrim image of Our Lady to the Ukrainian city of Lviv, in response to the request of the Ukrainian Greek-Catholic Church.

The shrine has several pilgrim images, replicas of the original which stands in the Chapel of the Apparitions and that was made according to the instructions of Sister Lúcia, the oldest of the three shepherd children to whom Mary appeared in Fátima in 1917.

The request was made on 10 March by Archbishop Ihor Vozniak of Lviv, of the UGCC, so that “we can pray, asking for her protection and for peace to return to our country”.

Speaking to the press, the rector of the shrine, Fr Carlos Cabecinhas, said that Mary is always by the cross of each person “because she is our mother, when under the terrible shadow of war, we turn to her so that she may intercede with her son for peace to return”.

According to the shepherd children of Fátima, Mary spoke of the need to consecrate Russia to her Immaculate Heart, and to pray that the errors of Russia should not spread around the world. The consecration was carried out already under Pope John Paul II, in 1984, and the errors were always taken to mean the ideology of communism.

If everything goes according to plan, the image will be transported from Lisbon to Krakow, and from there to Lviv, where it will remain for one month.