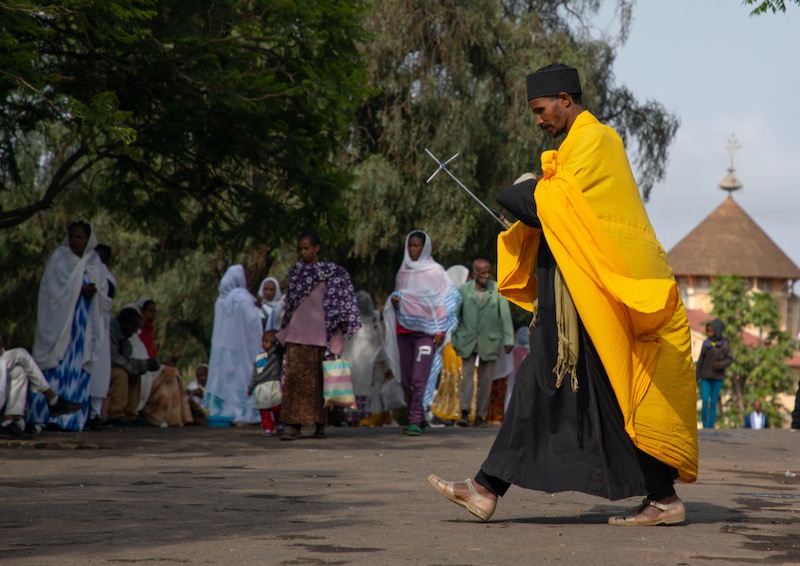 There is no substitute for marriage and family, says bishop

Bishop Router, vice-president of Accord, the Catholic marriage and relationship support agency in Ireland, noted that couples are facing insecure employment, the ever-increasing cost of living, scarcity of affordable housing, and the expensive childcare costs.

These challenges, he said, could seem like “insurmountable obstacles”.

He added that often the expectations placed upon a young couple by themselves, or by others, can be unrealistic.

“In the interest of the common good, it is incumbent on all of us to support engaged and married couples by trying to create a society where wealth and possessions are not considered to be the most important of goals, but rather where the quality of relationships within marriage and family life are seen as the true indicators of success.”

Bishop Router gave each couple a St Brigid’s Cross, traditionally presented to couples for their new home, and appealed to the Irish Government to rethink its housing strategy which he warned is affecting the quality of life within marriages and families. 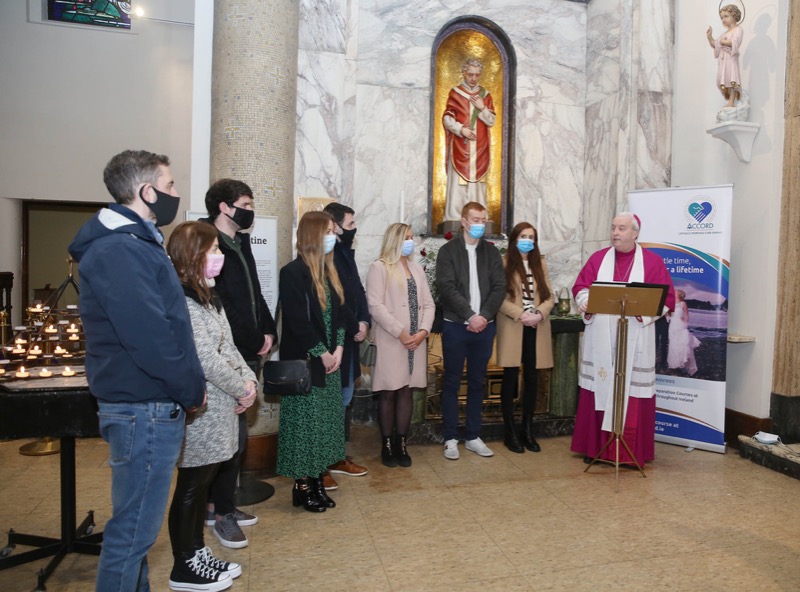 Bishop Michael Router with the four engaged couples during the blessing at the shrine of St Valentine. The four couples are Sinead Lyons and Brendan Mullen. Sinead is originally from Ballyhaise in Cavan and Brendan is originally from Killybegs in Donegal. Aisling Mc Entee and Daniel Queeney. Met while socialising in Maymooth and live in Dunboyne Co Meath. Heather Andrews and Josh Warde living in Maynooth. Heather is originally from Mullingar and Josh is from Portlaoise/Mullingar. Leanne Hynes and Niall Noone. Leanne and Niall met socially in Dublin and living in Dublin since 2016. Pic John Mc Elroy.

“The present cost of housing is unsustainable for any couple,” Bishop Router told the Irish Independent as he appealed to the Government to do something about the lack of affordable housing and the cost of rents.

“I heard during the week that in Dublin the average rent is around €2,000 per month. That is absolutely unsustainable for any couple. What sort of job do you need to be working in to be able to pay that every month?”

Noting that more than half of all Irish couples marry in the Catholic Church and that 12,748 people attended Accord’s sacramental marriage preparation courses across the island of Ireland during 2021, he said this represented a 53 per cent increase on 2020. Bookings for Accord Marriage preparation courses jumped 39 per cent in January 2022, compared to that of January 2021. Due to the Covid restrictions, these courses were held online.

This year Accord marks its 60th anniversary.

“It is not always easy to live in family: relationships can sometimes be challenged and frayed by the wear and tear of life. Family is for most people, however, the shelter in the storm and the reservoir of love to which we return time and time again to be nurtured, nourished, and healed,” Bishop Router said.

He added that in a world that values individualism and a shallow consumerist approach to life, being committed to anyone or to anything is no longer valued and so many people wander aimlessly from one passing high to another.

“In such an environment, we must try harder to make marriage and family work. There is simply no substitute for it.”

One of the couples who attended the blessing at St Valentine’s shrine was Sinead Lyons and Brendan Mullen. The secondary school teacher and Data Analyst met in 2012. Bishop Router is set to marry them in Rome just after Easter.

Tony Shanahan, Director of Accord Catholic Marriage Care Service, told The Tablet that the increase in numbers getting married was due to the unwinding of the Covid restrictions, as people weren't able to get married in church because the lockdowns.

“During the lockdown, people had time to reflect on what was really important to them. There are other ways to get married nowadays, sacramental marriage is a particular form of marriage and I think people decided that was what they wanted and that was what they were waiting for. I think it shows that the faith is alive. And that faith matters to people,” Shanahan said.

St Valentine was a priest who married couples in defiance of an edict from the Roman emperor Claudius II. He was martyred on 14 February around 269 or 270 AD.

The relics of St Valentine are contained in a reliquary within a dedicated shrine in the Carmelite Church of Our Lady of Mount Carmel on Whitefriar Street in Dublin.

The church was founded by Carmelite Fr John Spratt in 1825 on the site of the 13th century Carmelite monastery.

The church was opened in 1826 and Fr Spratt became its first prior. He was renowned in Europe for his skill as a preacher.

Following a visit to Rome in 1835, Pope Gregory XVI was so impressed that he gave Fr Spratt a reliquary containing relics of St Valentine which he brought back to Whitefriar Street church.