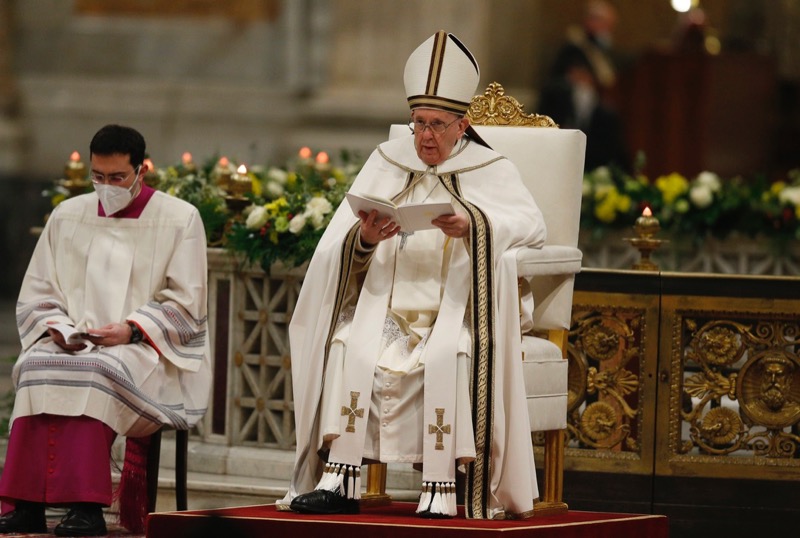 As Churches pray for Christian unity, a re-appraisal of Anglican Orders is on the agenda. 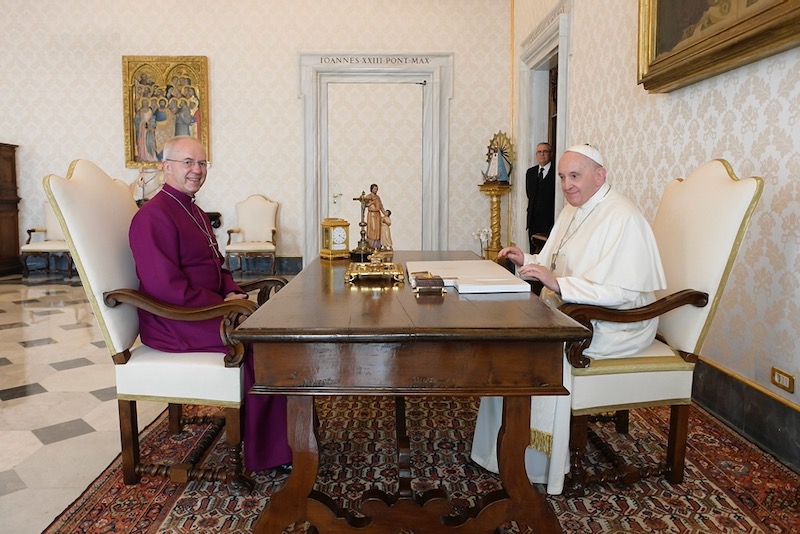 “What is important is the journey towards unity.” Pope Francis with the Archbishop of Canterbury Justin Welby.
CNS photo/Vatican Media

It was on this day 63 years ago, during the final ceremony of the Week of Prayer for Christian Unity, that Pope John XXIII announced he would be calling a Second Vatican Council, a historic event that was to decisively “re-set” relations between the Christian churches.

On 25 January 2022, the ceremony at the Basilica of St Paul’s-Outside-the Walls is being celebrated within the context of the unprecedented synodal pathway undertaken by Pope Francis, a process with similar potential to the council to radically shift how Christians see each other and work together.

Francis sees the synod process as a chance for the Catholic Church to learn from other Christian Churches and communities about synodality in their traditions, while the Vatican department in charge of Christian unity and the synod office have encouraged local churches to include other Christian leaders in the synod process. The synod’s aim is to hear from all the “People of God”, defined in the catechism as all those who are baptised, which includes those in mainstream denominations.

“When will unity be achieved? That is the question, no?” Pope Francis asked an ecumenical delegation from Finland last week. He then quoted the Orthodox theologian John Zizioulas, who has wryly suggested that this would not happen until the “eschaton”, the end of time. But as Francis was quick to add: “What is important is the journey towards unity.”

Could this journey include a change in the Catholic Church’s position on Anglican orders, which just over 125 years ago Pope Leo XIII declared to be “absolutely null and utterly void”? That 1896 ruling, Apostolicae Curae, continues to cause hurt among some Anglicans and is seen as an obstacle to unity. At the end of last year, an independent group of Catholic and Anglican theologians called for the teaching to be scrapped.

The Tablet understands that the issue has been raised directly with the Pope in recent months, who in turn asked for the question to be considered by Vatican officials. While there is no sign that Apostolicae Curae will be overturned, for several decades Rome has been moving away from the language used by Leo XIII and towards a recognition of the fruits of Anglican ministry. It is already a very different approach to the one found in the Congregation for the Doctrine of the Faith’s 1998 document, Professio Fidei, which claimed the teaching on Anglican orders was one of the “truths connected to revelation” and was to be held definitively.

The shift draws on the teaching of Vatican II, which recognised the “significant elements” that build up the Church outside of the “visible boundaries” of the Catholic Church, and on the many agreed statements on doctrine that have emerged from the formal dialogues between Anglican and Catholic theologians since the council.

“This issue causes hurt, and the Anglicans are diffident about raising it,” one Church source told The Tablet. “It’s a wound in the relations between the Churches and it would be great if a small step could be taken to healing the wound particularly as Pope Francis in practice recognises Anglican bishops through his joint initiatives with the Archbishop of Canterbury.”

While the ordination of women in the Anglican communion appears to make any blanket recognition of Anglican orders impossible, as Cardinal Kurt Koch, the President of the Pontifical Council for Promoting Christian Unity, explained at a press conference in 2020 it has created a “new problem”. The blunt language of “null and void” has already been softened at grassroots level.

The recent ordination to the Catholic priesthood of the former Anglican Bishop Michael Nazir-Ali included a prayer that recognised the “fruitfulness for salvation” of his ministry as an Anglican priest. It was originally composed by Cardinal Basil Hume for the ordination as a Catholic priest of the former Anglican Bishop of London, Graham Leonard. (Rome agreed to Hume’s request that Leonard’s ordination be conditional due to “prudent doubt” about the invalidity of his ordination in the Church of England.) During the ordination of Fr Nazir-Ali, Cardinal Vincent Nichols said: “We seek to build on the fruitfulness of the priestly ministry you have faithfully exercised.”

Five years ago The Tablet reported that Cardinal Francesco Coccopalmerio, one of the Church’s most respected legal experts, argued that Anglican orders should not be described as “invalid” and called for a less “rigid understanding of validity and invalidity.” He added: “One should be able to say: ‘This is valid in a certain context, and that is valid in another context’.”

The synod process could offer the impetus for a re-appraisal of Apostolicae Curae as Christians seek to walk together towards unity. Francis knows that synodality cannot simply be about talking. It must also involve taking decisions.