Brazil to stop being majority Catholic this year, polls suggest.

This year, the Mass was not celebrated according to the Missal of 1962, but as a Novus Ordo mass in Latin. 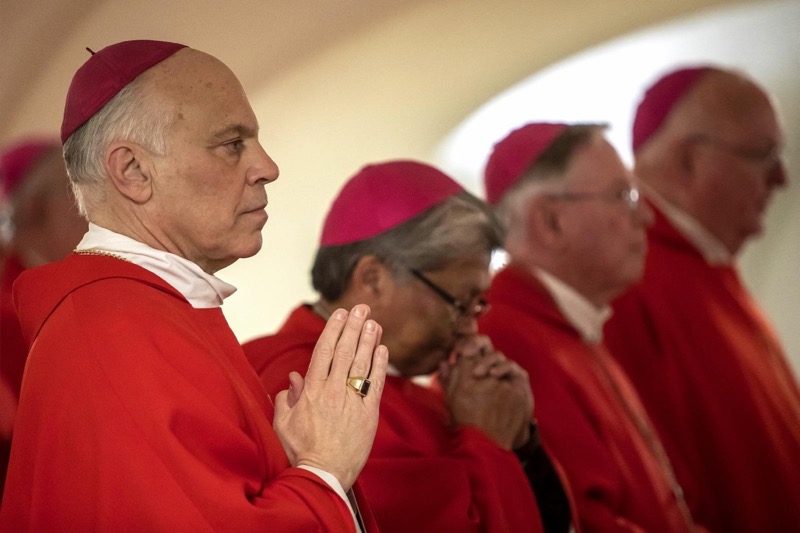 Archbishop Salvatore J. Cordileone of San Francisco and bishops from California, Hawaii and Nevada concelebrate Mass in the crypt of St. Peter's Basilica during their "ad limina" visits to the Vatican Jan. 27, 2020.
CNS photo/Stefano Dal Pozzolo

San Francisco Archbishop Salvatore Cordileone brought controversy to the opposite coast as he travelled to New York City to lead the “Mass for the Americas” at Old St Patrick’s Cathedral on 15 January. Cordileone revealed late last year that he is not vaccinated against the Covid virus and New York is one of many cities where the hospitals have filled with patients from the spread of the Omicron variant.

Joseph Zwilling, spokesman for the Archdiocese of New York, said that the archdiocese followed all city and state mandates and that they have encouraged everyone to get vaccinated. “However, we are relying on their honesty in attending [Mass],” Zwilling said. “We are not checking vaccine cards at the door.”

Proof of vaccination is required to gain access to most indoor venues such as restaurants and concert halls in New York. The old cathedral was packed. Very few of worshippers at the Mass, and none of the acolytes and other ministers, wore masks. Only the musicians in the choir loft were uniformly masked. Cordileone did don a mask when distributing Holy Communion.

This year, the Mass was not celebrated according to the Tridentine rite; Instead, it was a Novus Ordo Mass in Latin, and Cordileone presided ad orientem. The musical setting by Frank La Rocca, composer-in-residence at Cordileone’s Benedict XVI Institute, is dedicated to the Blessed Mother under the title Our Lady of Guadalupe, patroness of the Americas, and as the Immaculate Conception, patroness of the US.

Archbishop Cordileone’s annoucement of his unvaccinated status on 1 December has made waves within the US Catholic community. Parishioners in a church of his Archdiocese, St Agnes in San Francisco, even asked the prelate to reschedule a planned visit as a result.

But although Cordileone has resisted pressure to receive a vaccine, he insists he is “not an anti-vaxxer” – someone ideologically opposed to vaccination. Instead, the Archbishop said, he was following the advice of his medical doctor, who told him “that it’s probably not necessary for me to be vaccinated”. In the same interview with the San Francisco Chronicle’s “It’s All Political” podcast, the 65-year-old mentioned that when he found that he had shared a confined space with someone who he later learned had Covid-19, he tested himself and was negative. If he did exhibit symptoms, Cordileone added, he would self-isolate.