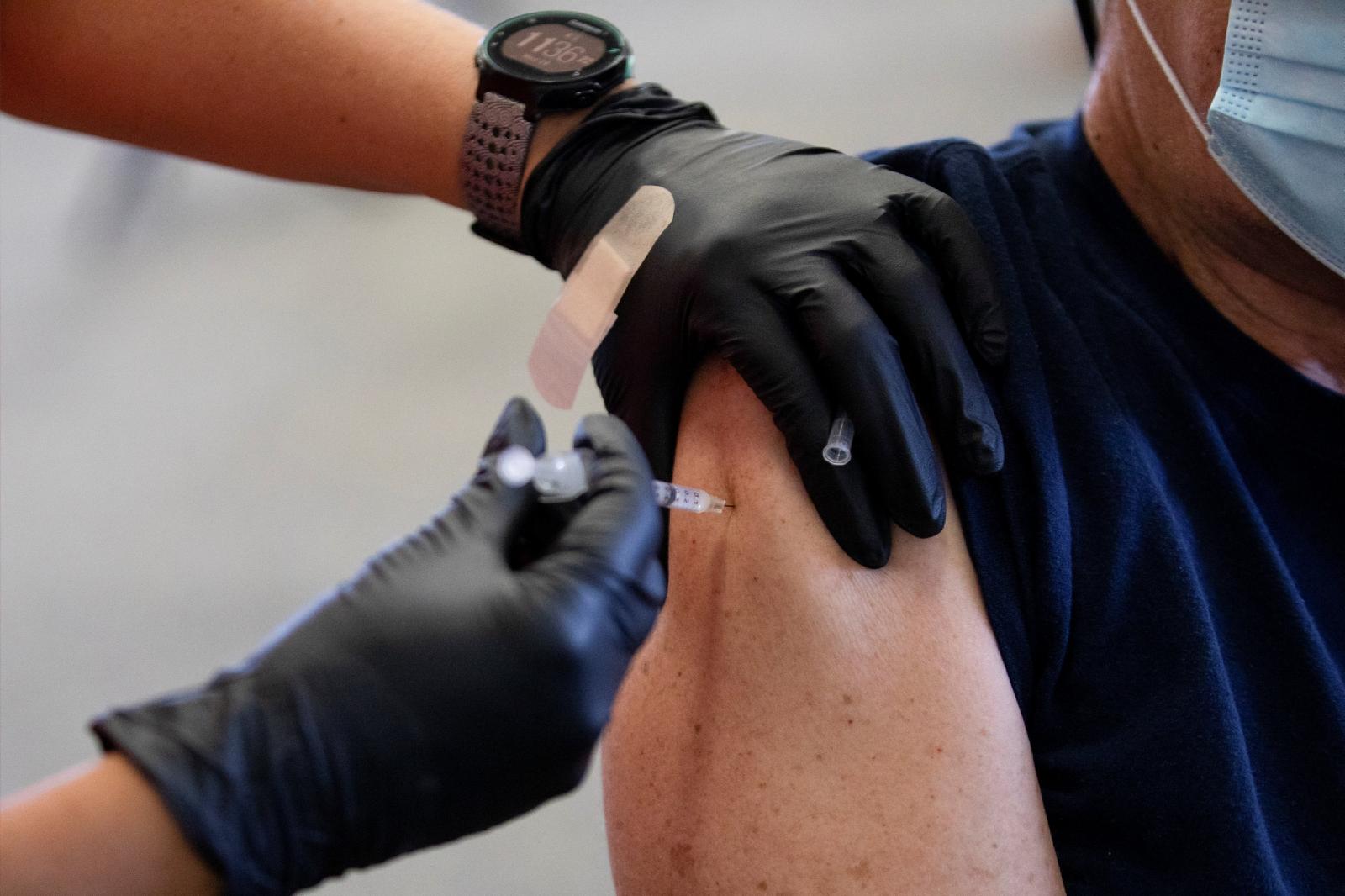 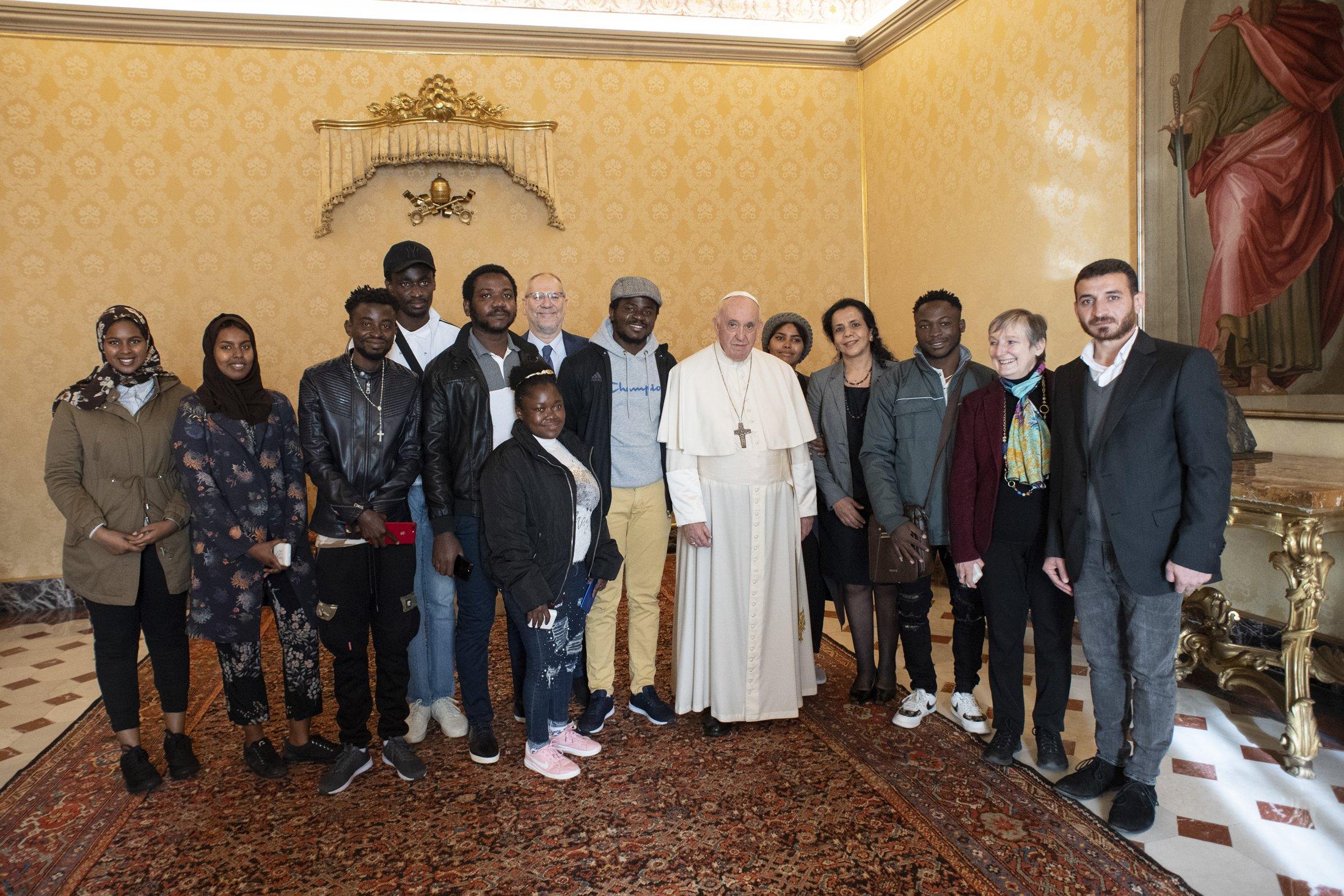 Pope Francis is pictured with asylum-seekers transferred from Cyprus to Italy with his help, during a meeting at the Vatican Dec. 17, 2021.
CNS photo/Vatican Media

The US Supreme Court refused to overturn a New York state mandate that required healthcare workers to be vaccinated. The mandate contained an exemption for those who cannot receive the vaccine for medical reasons but did not include an exemption on religious grounds. Two healthcare workers who refused the vaccines because stem cell lines derived from an aborted fetus were used in testing sued to keep their jobs. By a 6-3 vote, the court ruled that the state’s interest in protecting the health of patients and other health care workers trumped the conscience rights of the individuals.

Myanmar’s bishops led a quiet Christmas of “silence, prayer and solidarity.” It was to be celebrated in the "spirit of closeness to people who suffer", said Bishop Alexander Pyone Cho of Pyay in a pastoral Letter. His diocese includes the state of Rakhine, where the Rohingya ethnic minority have faced relentless assaults from Myanmar’s military. Priests, nuns, religious and lay people were urged to use any available funds for assisting, “people who have fled their homes, have found shelter in the forests and are suffering, due to the military persecution in Myanmar”. In his Advent message, Cardinal Charles Maung Bo of Yangon called on the faithful not to lose hope amidst “repugnant violence”.

A group of migrants from refugee camps in Cyprus who are being resettled in Italy at Pope Francis' expense helped the Pope celebrate his 85th birthday on Friday. “You saved us,” an African boy told Francis during a meeting in the Vatican's Apostolic Palace a day after the 12 arrived from Cyprus. The Pope will provide for 50 migrants to resettle in Italy.

The Catholic Church in the Philippines declared 25 and 26 December as National Days of Prayer  after 200 people were pronounced dead in the wake of Typhoon Rai, which flattened villages in the Mindanao and Visayas regions on 16 December. At least 50 people are still missing, especially in coastal areas, and more than 300,000 people fled their homes. Bishop Pablo Virgilio David of Kalookan, president of the bishops’ conference, added that the Church’s Solidarity Fund would be used for the emergency response and encouraged “everyone to remit all collections to Caritas Philippines that will then plan and implement our overall response”. On 20 December as churches in the affected region held services by candlelight, Pope Francis said: “I express my closeness to the population of the Philippines, struck by a strong typhoon that has caused many deaths and destroyed so many homes.”

The remaining 12 hostages of a group kidnapped by an armed gang in Haiti two months earlier were released on 16 December. Seventeen missionaries representing US-based Christian Aid Ministries, including 16 Americans and one Canadian, were kidnapped by armed men from a vehicle on 16 October and some were released in November.

In his Christmas message, Maronite Archbishop Samir Nassar of Damascus, Syria described the Christian community as “an heroic family”. He recalled 11 years of “a war, compounded by sanctions, blockades, migration, misery, death and indifference” and applauded the commitment of the people to live “with dignity” despite the many problems, austerity and long isolation. He said families “poor and cold”, like in the manger of Bethlehem, remained “firm in the faith”.

The patriarchs and heads of the Churches of Jerusalem issued a Christmas statement calling for dialogue to create a “special” zone aimed at “safeguarding the integrity" of the Christian quarter in the Old City. They wanted its uniqueness and heritage preserved for the well-being “of the local community, our national life, and the wider world”. Bishop Giacinto-Boulos Marcuzzo, Auxiliary Bishop Emeritus of Jerusalem, highlighted concern about “radical” groups who attack and prevent regular celebrations in certain parts of the city.

A human rights group in Indonesia denounced religious authorities in South Sulawesi province before Christmas for going back on a decision, following protests by Islamic groups, to allow signs to be put up in public places offering people Christmas greetings. The Jakarta-based Setara Institute for Democracy and Peace said the move “caved in to intolerance”. The provincial Religious Affairs Ministry office had issued a letter on 14 December allowing other government offices to display Christmas greetings to help promote religious harmony. However, the next day, Islamic groups calling themselves the United Muslims Forum protested, claiming it had sparked “anxiety” among local Muslims.

Travel bans on southern Africa from late November were based on “a deep-seated racism” and could have a severe impact on the poor in the region, where many livelihoods depend on the tourism industry, said Fr Russell Pollitt, director of the Jesuit Institute in Johannesburg. Speaking last month, he said that while Omicron had been detected in many countries in people who had not travelled to or from southern Africa, the UK “has not closed its borders to Belgium, and Canada has not shut off the United States”.

Suspected Islamist militants decapitated a church pastor in the Macomia district of Mozambique’s oil-rich northern province of Cabo Delgado a week before Christmas. They then forced his wife to carry the head to a police station and inform authorities. The next day, Mozambique’s President Filipe Nyusi claimed that the number of jihadist attacks had decreased in 2021 after “military cooperation” with Rwanda and the Southern African Development Community. However, attacks against villages and civilians have continued and at least 745,000 people have fled their homes.

Seafarers from a fishing vessel, abandoned in Mombasa, Kenya since March 2021, are being supported by the global maritime charity Stella Maris. Sixteen stranded crew members – Kenyans, Tanzanians, Koreans, Indonesians and Vietnamese – received emergency support from Stella Maris from September 2021 after the ship’s owner stopped providing wages, food and fresh water. Six Indonesian seafarers finally flew home just before Christmas with the help of the Indonesian Embassy. The charity is still helping the others, with the support of Archbishop Martin Kivuva Musonde of Mombasa.

Volcanic ash and lava blasting out of the Cumbre Vieja volcano on the Spanish island of La Palma since September 2021 formed part of two cribs in a nearby church over Christmas. Fr Domingo Guerra, parish priest of Holy Family Parish, said on 16 December, “although our church lies at the foot of the volcano, it hasn’t closed for a single moment since the eruption began and is now preparing for the birth of Jesus, reflecting the reality we’re living through”.