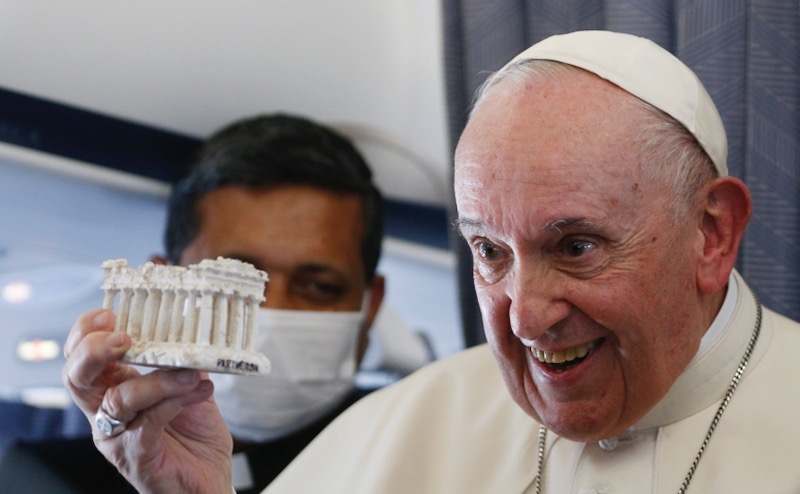 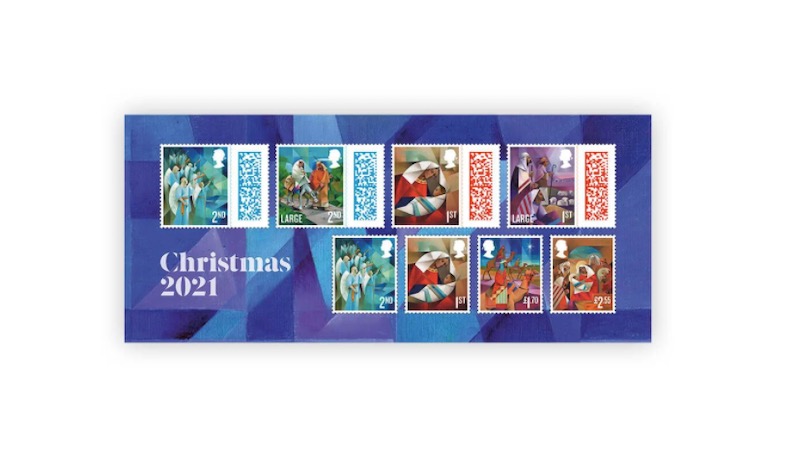 The Church in Scotland has called for an end to “political posturing” over the refugee crisis, and the framing of a new “just, humane approach” to the challenges of human migration. Following the deaths of 31 migrants in the English Channel, Anthony Horan, director of the Scottish Catholic Parliamentary Office, said that while the situation was “undoubtedly challenging”, it was essential to pursue a new approach “that goes beyond mere words and political posturing. These are human beings. And to think that in amongst it all there are people ‘profiting’ from the grave risk, suffering and heartache endured by the desperate”.

The Irish bishops have asked churches throughout the island to ring their bells on Gaudete Sunday in a message of hope as people prepare to celebrate Christmas. The bishops announced the initiative for 12 December in a statement issued following their Winter General Meeting. Advent, they said, is a time of patient waiting and joyful hope and although the Covid-19 pandemic continues, there were many reasons to be both thankful and hopeful. They expressed gratitude to those who have worked tirelessly to protect health and have cared for those who have fallen ill, as well as for the vaccination programme and the continuing commitment of so many to ensuring that churches remain safe places where people can gather in confidence to worship. “It is important that we remain vigilant, conscious of the threat still posed by the virus and any new variants which may emerge, and continue to take the steps we know will protect our own health and the health of others.” They appealed to people to respond generously to the Christmas appeals of Trócaire, Society of Saint Vincent de Paul, Crosscare and other charities which bring hope into the lives of many people.

The Irish postal service, An Post, has defended this year’s Christmas stamps following criticisms by the Bishop of Kildare and Leighlin, a prominent priest, and some members of the public, who believe they are not religious enough. Jesuit Fr Kevin O’Higgins decried the stamps, saying they depicted “bland nothingness” and questioned whether this year’s more secular theme was because “we’ve become far too cool to acknowledge that Christmas might have something to do with the birth of Christ”. Bishop Denis Nulty also expressed reservations about the choice of design. In a tweet, he contrasted the secular character of An Post’s Christmas stamps with the more religiously inspired stamps produced by the Royal Mail in the UK. “Just look at what our neighbours up North and across the Irish Sea will be sending compared to what will be on our envelopes,” he criticised. The bishop posted an image of An Post’s €1.10 range which features two people in party hats under mistletoe with the message, ‘Love’. He placed it alongside some UK stamps which feature shepherds, Bethlehem and St Joseph leading Mary on a donkey. In a statement, a spokesperson for An Post said the postal service seeks to make all of its stamps “as inclusive as possible and meet a variety of demands”.

The House of Lords has debated an amendment to the Police, Crime, Sentencing and Courts Bill on ministers of religion having access to crime scenes. The amendment was tabled by Conservative peer, and former Lords Leader, Baroness Stowell of Beeston and Crossbench peer, Baroness Masham of Illton, following the murder of Sir David Amess last month.

Professor Francis Davis is to become head of Digby Stuart College, one of the University of Roehampton’s four constituent colleges, and will also be taking on the post of Professor of Civic Leadership and International Studies in the Business School, starting on January 17th 2022.  Professor Davis is currently Professor of Communities and Public Policy at the University of Birmingham, and brings extensive experience in public service, business, the charitable sector and the intersection between policy and Catholic theology.  Outside of academia Professor Davis has advised and held public appointments with several government departments including the Department for Levelling Up, Housing and Communities, the Department for Work and Pensions, the Department of Health, and the Foreign, Commonwealth and Development Office.

Around 30 members of the Young Christian Climate Network (YCCN) met last Saturday in London to review its Relay to COP26 and chart the beginnings of a course for the future. They felt it would be important for participants to have something that “captures the imagination” and “feels truly positive”.  One of the coordinators of Relay to COP26, Josh Evans, told The Tablet this week that “the unanimous feeling was that the Relay was a huge success”. It mobilised at least 2,500 walkers, 223 MPs were lobbied, there were 14 statements were made by MPs and key policymakers, over 100 media appearances – including Songs of Praise –  and excellent social media outreach. He added that, “some of the things we'll take forward into what we do next are that initiatives will be fun, awe-inspiring, inclusive and sustainable, and we are now well placed and motivated for the next chapter.”  He also felt it was important “to develop meaningful relationships with decision-makers.” Participant feedback included: “Being involved in the Relay has made me feel less cynical about the Church” and “A truly wonderful thing to have done - a huge encouragement to the Church, that together we must and can stand up for Climate Justice and make our voices heard.”

The UK-based ecumenical charity Friends of the Holy Land is appealing to UK churches to support pregnant mothers in Bethlehem with their medical bills. Families are facing costly medical treatment as people living in the Palestinian town experience economic hardship and unemployment. Since Covid stopped the tourism trade in its tracks in March 2020, families across Bethlehem have been plunged into financial crisis, with Christian families, in particular, affected by the disappearance of international pilgrims to the place where Jesus was born. Friends of the Holy Land is providing grants to Christian families hit the hardest by the pandemic as Bethlehem approaches its second Christmas with few visitors. Almost 40% of Bethlehem families buy groceries on credit or rely on food parcels. There are no savings for maternal healthcare or medical emergencies, and medical costs are pushing families further into debt.

A Soom event on the day was due to include Cafod partners from Peru, Columbia and Brazil.  Maurício Ye’kuana from Brazil is from Yanomami Indigenous Territory and he was to talk of people defending their rights and protecting the Amazon rainforest despite huge threats from illegal gold mining. CSAN, in liaison with the National Board of Catholic Women, has supported 16 days of activism, from the International Day for the Elimination of Violence against Women on 25 November to 10 December. The focus has been on women and girls who are survivors of violence, those that work to support them in their recovery, and those who advocate to change systems. Details of support services for those suffering violence and abuse were given, including helplines for reporting rape, sexual assault, and domestic abuse. The National Board of Catholic Women has produced a resource for parishes, ‘Raising Awareness of Domestic Abuse’.

Refugee organisations and missionary groups are holding Christmas vigils and services for migrants, alongside organising hospitality and solidarity action with migrants in Britain. The Jesuit Refugee Service UK (JRSUK) has produced daily Advent prayers focusing on the seeing migrants as neighbours. It goes along an Advent appeal to raise money and personal items such as Winter coats for refugees in detention centres. On 7 December Bishop Paul McAleenan, Auxiliary Bishop of Westminster and the lead Bishop on issues facing migrants and refugees, spoke at the JRS UK annual Advent service at Farm Street Jesuit parish in London. The JRS ‘Hopes and Dreams’ drama group performed live during the service. JRSUK has lamented the UK government’s “dangerous” policy regarding migrants crossing the Channel, and the Nationality and Borders Bill, which “pushes legislation that could criminalise people helping asylum seekers struggling at sea and punishes refugees for travelling informally.” The Columban Missionaries in Britain are to host a zoom candlelit service on 16 December, linking the waiting aspect of Advent with the waiting experienced by refugees travelling in search of safety, waiting to hear from loved ones or waiting to be granted asylum. Those who have lost their lives seeking a better life, particularly in the English Channel, will be remembered. More than 25,000 people have made the dangerous journey from France to the UK across the English Channel this year. Participants are invited to light candles during the service.

Last weekend, more than 4,000 homes Scotland and Northern England remained without power in Britain a week after Storm Arwen struck on 26 November, and churches too were counting the cost. In Scotland, the Moderator of the General Assembly of the Church of Scotland, Lord Wallace of Tankerness, said: “Our thoughts are with everyone across the country who is still without power due to the impact of Storm Arwen, the worst we have seen in decades and they are very much in my prayers.” Worcester Cathedral was among the dozens of church buildings to suffer damage to steeples, roofs, and other parts of their properties from wind, falling debris, and trees.  A large stone fell from the tower of Worcester Cathedral, smashing through the north choir-aisle roof and causing extensive damage, the Bishop of Worcester, Dr John Inge, reported. The Cathedral was closed for several days. The roof of the Church in Wales parish of St Mary's building in Brymbo was badly damaged and emergency repairs are now being carried out to make the building safe. Councillor Paul Rogers said: “There is a desperate need to raise funds to cover ongoing maintenance and running costs or it will close.” He warned “there is a chance that residents may not be able to visit the churchyard.” Other churchyards damaged included St Peter’s in Heysham, St Mary’s, Morecambe, and St Wilfrid's Church in Standish.

Two Church in Wales primary schools in Wrexham – All Saints' School in Gresford and Ysgol Bwlchgwyn – closed after being left without power or heating in the wake of Storm Arwen. In Staffordshire, St Joseph's Catholic Primary School in Rugeley was amongst those closed to protect students and parents from dangerous road conditions and icy pavements.

The former Bishop of Galloway has died peacefully at the age of 83 Paisley-born, and one of three brothers who entered the priesthood, Bishop Emeritus John Cunningham was ordained in Galloway in 1961. He was parish priest of St Patrick’s in Greenock for twelve years and served as Vicar General in the Paisley diocese. A key initiative of his tenure as Bishop of Galloway, a post he held from 2004 to 2104, was the move the diocesan cathedral from Holy Shepherd to St Margaret’s in Ayr. The new Cathedral of St Margaret was rededicated in 2007. Emeritus Bishop Cunningham had been living in retirement with the Little Sisters of the Poor in Greenock. BM

Stella Maris UK, currently celebrating its centenary year, has welcomed comments by Cardinal Peter Turkson that the pay and working conditions of those employed at sea are under serious threat. He was speaking at a time when the pandemic is straining weak regulatory and support frameworks for fisherfolk, the cardinal noted.