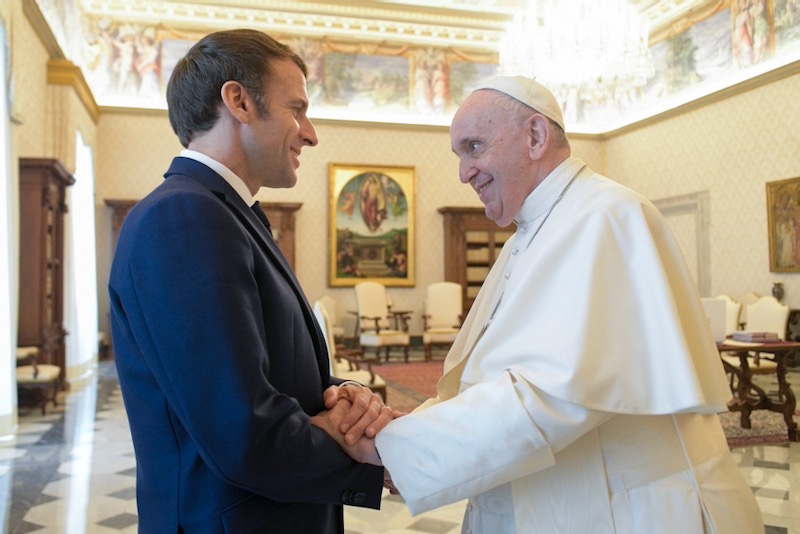 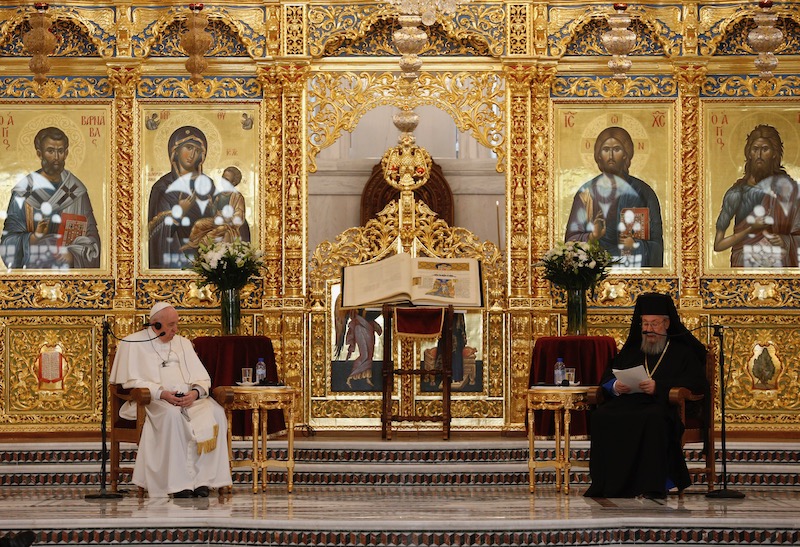 Pope Francis and Orthodox Archbishop Chrysostomos II of Cyprus attend a meeting with the Orthodox bishops who are members of the Holy Synod at the Orthodox cathedral in Nicosia, Cyprus, this morning.
CNS photo/Paul Haring

The hope, consolation and unity all Christians and all residents of Cyprus yearn for will be realised only with patience, commitment and collaboration, Pope Francis said.

Meeting this morning with Archbishop Chrysostomos II, head of the Orthodox Church of Cyprus, the Pope heard a long litany of the offences and atrocities Orthodox and other Christians of northern Cyprus have suffered at the hands of Turkish Cypriots and the Turkey military since the island nation was divided in 1974.

Yhe archbishop said: “We firmly believe in the peaceful resolution of our differences, whether they are civil or religious, and that the right path is only through a truly honest dialogue.”

Without specifically mentioning northern Cyprus, Pope Francis assured Archbishop Chrysostomos that “your sorrows and your joys are also ours”.

During the meeting with the Orthodox and later celebrating Mass at the GSP Stadium, the Pope focused on how faith, while flowing from a personal encounter with Jesus, must be supported and lived out in community.

The church in Cyprus traces its origins to St Barnabas, a Cypriot and early convert to Christianity, who traveled and evangelised with St. Paul.

“The name Barnabas means both son of consolation and son of exhortation,” the Pope said, adding that both consoling and exhorting or teaching are necessary in the proclamation of the Gospel.

“True consolation cannot remain private but must find expression in exhortation and guide freedom toward goodness,” he said. “At the same time, all exhortation in the faith must necessarily be grounded in the consoling presence of God and accompanied by fraternal charity.”

The church as a whole, no matter the denomination, is called to bring consolation to all who are troubled or frightened, he said. “Even before we say a word, we need to listen, to let ourselves be questioned, to discover others, to share. Because the Gospel is not handed on by communication, but by communion.”

The fourth chapter of the Acts of the Apostles describes how Barnabas sold all he owned and laid the proceeds at the feet of the apostles.

“This splendid gesture suggests that, in order to be revitalised in communion and mission, we too need to have the courage to divest ourselves of all that, however precious, is earthly, in order to favour the fullness of unity,” the Pope said.

“Clearly, I am not speaking of what is sacred and helps us to encounter the Lord, but of the risk of absolutising certain customs and habits that do not require uniformity and assent on the part of all.”

Catholics and Orthodox, he said, must not think they have “irreconcilable differences,” especially in matters that have “nothing to do with the Gospel”.

He added: “Let us not permit the traditions, in the plural and with a small t, to prevail over Tradition, in the singular and with a capital T” he said. “That Tradition bids us to imitate Barnabas and leave behind everything, however good, that could compromise the fullness of communion, the primacy of charity and the need for unity.”

In his homily at the Mass, Pope Francis urged Catholics in Cyprus to foster kinship and unity as an essential act of their faith.

Local organisers estimated about 10,000 people attended the Mass. The congregation included members of the historic Maronite and Latin-rite communities of Cyprus as well as newcomers from the Philippines, Vietnam, Sri Lanka, India and several African nations. In addition, dozens of UN peacekeepers, who patrol the nearby green line between the north and south, were present in the stands, wearing their khaki uniforms and blue berets.

The Gospel reading for the Mass was St Matthew's account of Jesus healing two blind men.

Pope Francis urged those at Mass to notice how the two went to Jesus together. “This is an eloquent sign of the Christian life and the distinctive trait of the ecclesial spirit: to think, to speak and to act as we, renouncing the individualism and the sense of self-sufficiency that infect the heart.

“Each of us is blind in some way as a result of sin, which prevents us from seeing God as our Father and one another as brothers and sisters,” the Pope said. “That is what sin does; it distorts reality: it makes us see God as a tyrant and each other as problems.”

When life is difficult “we must not face the darkness alone. If we bear our inner blindness alone, we can become overwhelmed. We need to stand beside one another, to share our pain and to face the road ahead together.”

In the church and in society, he said, “healing takes place when we carry our pain together, when we face our problems together, when we listen and speak to one another. That is the grace of living in community, of recognising how important it is to be community.”

Catholic news Pope in Cyprus The Catholic Church in Cyprus