Pope tells bishops how they can be 'blessed' 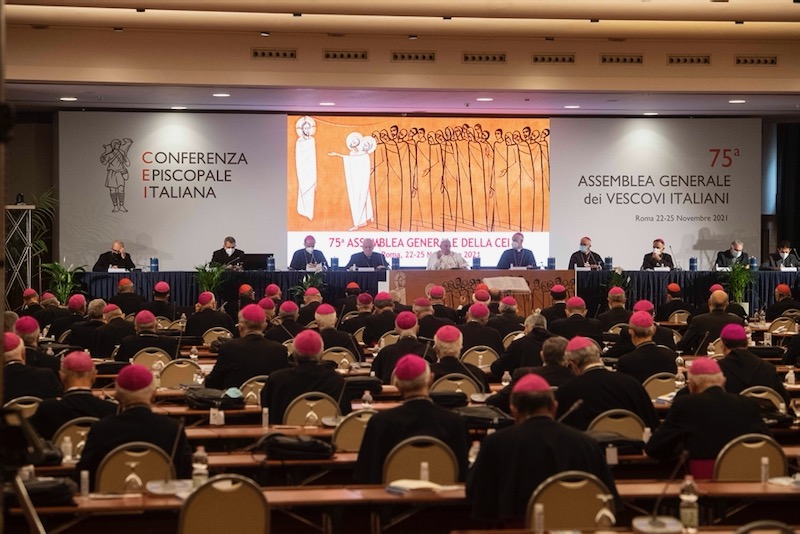 Pope Francis has given bishops in Italy a sermon on the mount-style guide for how to minister to their people, urging them to embrace poverty and avoid becoming bureaucrats shut away in large offices.

The 84-year-old Jesuit Pope, who has repeatedly called for clergy to be humble pastors and not to act like “princes”, handed out a text, “The Beatitudes of the Bishop”, at a meeting of the Italian hierarchy in Rome.

The eight commandments include the call for bishops to see their position as “a service not a power”; to be unafraid “to dirty his hands with the mud of the human soul to find God's gold”; to work for reconciliation in divided societies and be ready “to go against the tide, putting on a ‘hard’ face like that of Christ on his way to Jerusalem”.

Although the guidance was given to Italian bishops, they are applicable to every bishop and priest in the world. The words were originally drafted by the Archbishop of Naples, Domenico Battaglia, who was appointed to lead the southern Italian diocese at the end of last year. Archbishop Battaglia shares Francis’ pastoral agenda and has a reputation as a “street priest” who spent years helping drug addicts in Calabria. He is also friends with the renowned anti-mafia cleric Don Luigi Ciotti.

Modelled on Jesus’ sermon on the mount from the Gospel of Matthew, the beatitudes reflect the Pope’s gospel-based reforms of the Church, including his call for pastors to be close to their flocks and avoid careerism and worldliness. It seeks to avoid bishops becoming managers rather than ministers, while the emphasis on poverty is a challenge for those leading wealthy dioceses. When he was Archbishop of Buenos Aires, Francis lived in a flat rather than the grand residence of his predecessors, and after his election as Pope chose not to live in the Vatican's Apostolic Palace and opted for a two-room suite in the Casa Santa Marta.

Francis handed the episcopal beatitudes to each bishop on a prayer card with a picture of the Good Shepherd when he addressed them at the Hotel Ergife, Rome, on 22 November.

Blessed are the Bishops

1. Blessed is the Bishop who makes poverty and sharing his way of life, because through his testimony he is building the Kingdom of Heaven.

2. Blessed is the Bishop who is not afraid to have his face covered with tears, so that in them may be mirrored the pains of the people, the labours of priests, [and] finding God’s consolation by embracing those who suffer.

3. Blessed is the Bishop who considers his ministry a service and not a power; making meekness his strength, giving everyone the right of citizenship in his own heart, so as to inhabit the land promised to the meek.

4. Blessed is the Bishop who does not shut himself up in the palaces of government, who does not become a bureaucrat more attentive to statistics than to faces; to procedures than to stories and who seeks to fight at the side of people for the dream of the justice of God because the Lord - encountered in the silence of daily prayer - will be his nourishment.

5. Blessed is the Bishop who has a heart for the misery of the world, who is not afraid to dirty his hands with the mud of the human soul to find God's gold; who is not scandalised by the sin and frailty of others because he is aware of his own misery, because the gaze of the Crucified Risen One will be for him a seal of infinite forgiveness.

6. Blessed is the Bishop who banishes duplicity of heart, who avoids every ambiguous dynamic, who dreams of good even in the midst of evil, because he will be able to rejoice in the face of God, discovering his reflection in every puddle of the city of people.

8. Blessed is the Bishop who for the sake of the Gospel is not afraid to go against the tide, putting on a “har” face like that of Christ on his way to Jerusalem, without letting himself be held back by misunderstandings and obstacles because he knows that the Kingdom of God advances in the contradiction of the world.