Catholic and Orthodox at odds over Greece papal visit

Traditionis Custodes concerns the acceptance of Vatican II as an authentic action of the Holy Spirit in conformity with the tradition of the church. 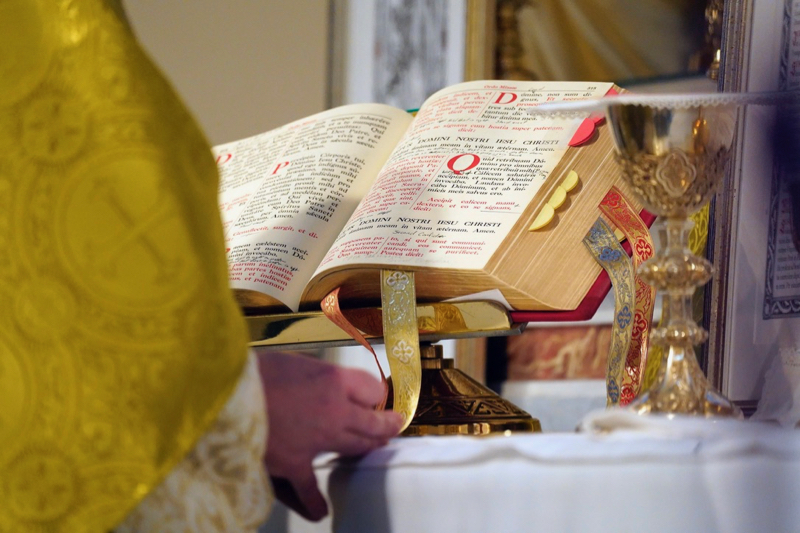 The liturgical celebrations which took place before the Second Vatican Council were legally “abrogated” by Pope Paul VI.
CNS photo/Gregory A Shemitz

Archbishop Arthur Roche, the leader of the Holy See’s divine worship office, has spelt out the Vatican’s position on the Old Rite. The liturgical celebrations which took place before the Second Vatican Council, he says, were legally abolished – “abrogated” – by Pope Paul VI. Although pre-Vatican II liturgies can continue as an “exceptional concession”, the reformed version is the norm. In other words, a new currency was adopted even though it’s still permissible to use old money.

The British archbishop’s remarks, revealed in a leaked letter sent to Cardinal Vincent Nichols, the Archbishop of Westminster and President of the Bishops’ Conference of England and Wales, are significant. It is often claimed by traditionalists that St Paul VI did not legally abolish the Old Rite and when he lifted restrictions on the pre-Vatican II Mass in 2007 Benedict XVI said that it was “never abrogated, as an extraordinary form of the Church’s Liturgy”.

The publishing of the letters came as the Pope’s Diocese of Rome issued guidelines on the Old Rite. These allow for pre-Vatican II Masses to be said in five Roman churches but not at Easter, the high point of the liturgical year. No other sacraments can be celebrated using the older forms.

All of this reflects the dominant line of thinking from the Holy See: the Old Rite is to be gradually phased out, although pastoral care has to be offered to those attached to these liturgies. The task of bishops is to encourage everyone to return to the Roman Rite which emerged as a result of the liturgical reforms requested by the bishops at the 1962-65 council.

Six decades on and Vatican II has reached a new phase in its implementation. Pope Francis’ restrictions on the old Latin Mass, issued in the document Traditionis Custodes (Guardians of the Tradition), overturned Benedict XVI’s 2007 ruling which had lifted them. During Benedict’s papacy, an attempt had been made to allow the old and new liturgies to exist side-by-side. That experiment has been ended by Francis, whose approach is closer to that of Paul VI who only envisaged the Old Rite for sick and aged priests.

The Jesuit Pope made his decision following a consultation of the worlds’ bishops. The findings convinced him that the allowances made by Benedict had been exploited to foment division and undermine Vatican II. It shows that the issues at stake go much deeper than the use of Latin or a personal preference for certain prayers. As Cardinal Blase Cupich of Chicago explained recently, Traditionis Custodes concerns “the acceptance of Vatican II as an authentic action of the Holy Spirit in conformity with the tradition of the church”.

The way Christians worship has also shifted numerous times throughout the Church’s 2,000-year history. The liturgical reforms post-Vatican II can be likened to an ancient house undergoing a major refurbishment. It is the same building in the same place, but the alterations are designed to ensure the home is fit for its purpose. Some things have been stripped back and other elements added, while the architects used the original plans for the property, and sought to build on what was already there.

Some, however, are not happy with how things turned out. In his letter to Archbishop Roche, Cardinal Nichols writes that “pastoral attentiveness” means the bishops “have to accompany people who are firmly attached to the Missal of 1962 [Old Rite]”. The archbishop calls for a “delicacy of care and direction” in this regard.

It is not a straightforward task. Cardinal Nichols’ letter asks a series of questions related to the implementation of Traditionis Custodes in England and Wales, where there is a small but very active group of Old Rite supporters. He specifically requests clarification from Rome about how to respond to the Latin Mass Society’s understanding of the Pope’s ruling.

The society’s primary purpose is to promote the pre-Vatican liturgies and soon after Traditionis Custodes came out they published their own canonical interpretation. It makes the claim that Francis’ legislation “does not abrogate the 1962 Missal [Old Rite], and thus leaves the right of priests to celebrate it intact” although “it does regulate the way this right can be exercised”.

Archbishop Roche says the Latin Mass Society’s understanding of the Pope’s ruling “has no standing whatsoever” and “should not be published as an authoritative commentary”. He pointed out that the “bishops alone, in communion with the Pope, are the moderators of the liturgy”.

The British archbishop explains that the Tridentine liturgy has been regulated rather than “suppressed”, but that it is not something that can be promoted nor can it be used to challenge Vatican II.

What Rome envisages and what happens on the ground are often two different things. In a number of dioceses, Old Rite celebrations will continue for the time being. Francis has set out the direction of travel on the liturgy, but getting to the destination is going to take time and a lot of patience. Archbishop Roche's office said he did not wish to make any further comment on the correspondence as they were "confidential in nature".

In response to questions from The Tablet, Dr Joseph Shaw, the Chairman of the Latin Mass Society, described Archbishop Roche’s comments as a “puzzling statement” which appear to contradict “the precise words of Pope Benedict" and go "beyond what is said in Traditionis Custodes.” Dr Shaw said the guidance issued by the society on Pope Francis’ Old Rite restrictions “was not presented as having official standing, so we are in complete agreement with Archbishop Roche on that.” Th society's statement, he added, “was drawn up following careful advice from experts in canon law, and I hope it will stimulate further discussion of matters of great importance for many in the Church.”

Dr Shaw stressed that the society was “already in dialogue with the bishops” about the implementation of Traditionis Custodes although pointed out that “as an organisation, we exist to represent the concerns of our supporters, who are attached to the older Mass, and we will continue to do this.” He added that if dialogue “is simply a euphemism for closing down celebrations to force congregations to attend the reformed Mass, then we can't expect any response from our dialogue partners. Happily few bishops in England or around the world have taken that path.”

Dr Shaw said the effect of Francis’ ruling was being felt in “a few ways” in England and Wales but that most bishops have not moved to restrict Old Rite celebrations.

An exception, he said, was the Bishop of Clifton, Declan Lang, who has rescinded permission for a small, Benedictine-inspired community in Glastonbury to celebrate the Old Rite. Dr Shaw says this caused “considerable and it seems quite needless upset in his diocese” and he hoped that Bishop Lang “feels able to make a more measured application of the Apostolic Letter in due time.” He also pointed out the Latin Mass Society’s annual requiem Mass in November for deceased members and benefactors was celebrated by a priest rather than a bishop, as has been recent practice. The involvement of a bishop in this Mass, he said, had been a way of showing “our unity with the Archdiocese of Westminster.”

Meanwhile, in Shrewsbury, Dr Shaw pointed out that the Bishop, Mark Davies, had moved a regular celebration of the Old Rite from a parish church into his Cathedral.