Hundreds march for climate in Glasgow and London 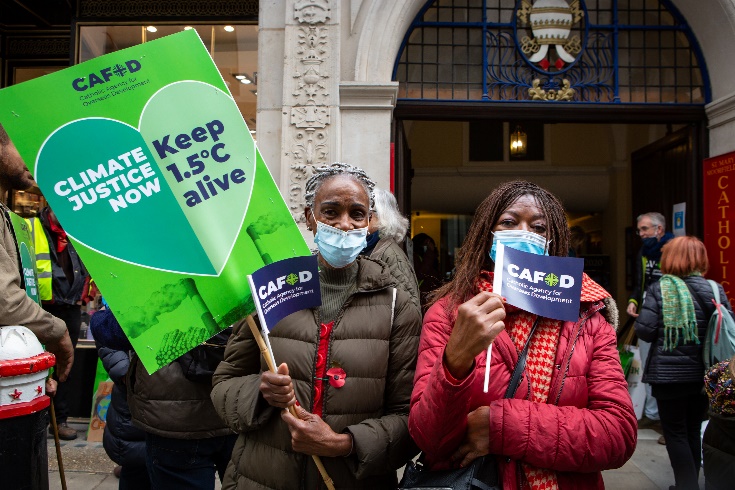 Gemma Pacquette, 71 and Erma Richards, 71 travelled in from Kilburn in North London to join fellow Cafod supporters winding their way through the City of London.
Cafod

Hundreds of campaigners with the Catholic aid agency Cafod marched for climate justice in Glasgow and London yesterday.

They urged world leaders and negotiators at the COP26 climate talks in Glasgow to commit to ambitious plans and funding to keep global temperatures within 1.5C of warming and called for increased support for the countries and communities suffering most from the climate crisis.

The marches came as Catholic schools and dioceses nationwide held initiatives to promote awareness of the climate emergency.

Pupils from Plymouth Roman Catholic Multi-Academy Trust came together to reflect and pray about climate change in a Mass at Plymouth cathedral led by Bishop Mark O’Toole.

“Our young people and children see so clearly that we need to act urgently to protect the earth, our common home. It is good to be with some of them from our Catholic schools, as we pray together for this important intention and all those gathering for COP26. May those gathered in Glasgow, and all of us, do what we can to bring about effective change for the heathy future of all our young people and the preservation of our beautiful common home,” said Bishop O’Toole.

Cafod director Christine Allen, said: “The COP26 summit in Glasgow is due to end next Friday. There are only days left to ensure the planet is put on a path that can prevent irreversible climate change.

“The first week of COP26 has seen important announcements on issues such as limiting methane emissions, finances, stopping the funding of fossil fuel projects and halting deforestation. The progress that has been made is exciting. However, we need major breakthroughs in the final week of COP26 to limit global heating to 1.5 degrees.

“If we do not see commitments that keep the ambition of 1.5 degrees alive or that fund the poorest who face the reality of climate change now, the deals we have seen will be undermined”.

Lifelong friends Gemma Pacquette, 71 and Erma Richards, 71, were among the marchers in London.

Erma described her heartbreak at discovering that a river that she learned to swim in as a child, in St Lucia, has dried up.

She said: “I feel very strongly about climate change. I was born in St Lucia. The river where I learnt to swim – I went back home ten years ago, and that river has dried up, its gone! That river meant so much to me.

“I would love my great grandchildren to be able to swim in rivers, like I did. I want them to be able to have the freedom I had experienced as a child.

Josh Grierson, 28, who with his nephew Byron also joined the London climate protest, said: “I wanted to be a part of the march because I think you’re either an agent of change or you’re condoning the equilibrium that we’re in now. I think if you don’t act then you can’t point fingers when nothing happens. So, I want to be here to have my voice heard.

“It’s always an amazing feeling to be united with people that have a shared common ethos. It’s only with numbers that you can create change.