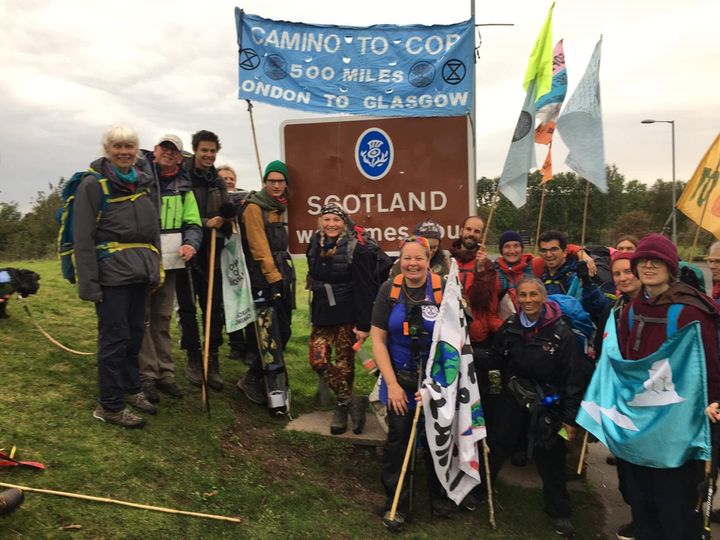 World leaders are 'way off track' from addressing climate change

Activists from Animal Rebellion, a sister group to Extinction Rebellion, staged a protest in London today ahead of COP26.
Stephen Chung / Alamy

The director of Cafod has warned that “we are way off track” in terms of addressing climate change and are currently heading for global temperature rises of 3C.

In her address to The Tablet’s online Autumn Festival, “On the Road to COP26”, Christine Allen said the summit in Glasgow was about making sure world leaders, particularly the leaders of rich countries and high emitters, are taking the action that is needed to address the climate crisis.

While targets are really important, she underlined that they are “meaningless unless we recognise that we are not hitting them, and we act on them”.

The climate negotiations in Glasgow have been billed as the last chance to secure a collective deal to keep global temperature rises to no more than 1.5C.

Christine Allen described climate finance as a “critical” issue and highlighted how money pledged to help low-income countries adapt to the impact of climate change had yet to be delivered.

“This commitment to finance is really critical because low-income countries need the support to change their economies, to invest in alternatives and to leapfrog the dirty industries that, frankly, we have gotten rich through.”

She said agencies such as Cafod were focused on the question of climate justice because a lot of development work was being literally “washed away” by natural disasters such as flooding, crop failures, and food crises caused by erratic weather patterns.

“Right across the world it is the poorest who are paying the price,” she said.

“This is an issue for Cafod because it is a question of climate justice. Those who have done the least to cause the climate crisis are paying the biggest impact. And they are doing so with the least resources to respond.”

Speaking about the 2015 encyclical, Laudato Si’, Ms Allen described it as “a landmark document” through which Pope Francis had “shifted the narrative”.

“For the last six years Laudato Si’ has also energised and galvanised the Church at all sorts of levels, from the grassroots in parishes to the Live Simply Action Plan of the Vatican.”

Paying tribute to the Church and Pope Francis for being so vocal on this issue, the Cafod director said the Church is vocal because it is alongside people in need.

“No longer is our theology about dominion. It is about that sense of our place within creation and that is why more than 45,000 people of all ages have participated in Cafod actions this autumn.”

Andy Atkins, chief executive of A Rocha UK, said COP26 needed to bring about “massive cuts in greenhouse gases” to levels way beyond what countries have currently promised in their Nationally Determined Contributions because the targets were “way off track”.

He also called for a halt to the destruction of natural carbon sinks such as forests, wetlands, and grasslands.

“What we most need from COP26 is massive cuts in greenhouse gases to be agreed at levels way beyond what countries have currently promised in their in their Nationally Determined Contributions (NDCs). The world needs to hear that governments will go much, much further, much sooner in cutting greenhouse gases.”

Speaking about the potential of the churches to make a positive impact on the crisis, he highlighted how there are 50,000, self-identified, worshiping Christian communities, and churches in this country across the denominations. “We have got land, we have got buildings, which we can use to cut carbon emissions practically. Just imagine if 25% of those churches across the country said, ‘we are going to stand up and do something on this issue. What a sign of hope. And what a practical example,” he said.

Josephine Carlsson, church ethics lead with CCLA, a specialist investment manager for religious organizations charities in the public sector, which sponsored the event noted that “climate change is the largest threat to our environment, to our communities and if that is the case, it is also the largest threat that you can have to investments”.

Ms Carlsson, who is also secretary to the Church Investors group, which has assets of £21 billion, highlighted how CCLA was a seed funder, together with the government, in the Clean Growth Fund in the UK. She underlined how investors can drive change and push cleaner technology forward in companies.

In the webinar, “Healthy planet, healthy people. How far do we have to go to make this statement a reality in today’s world and what can the Catholic Church do to help?’ Dr Lorna Gold, chair of the Board of the Laudato Si’ Movement, said she could see, “We are going in the wrong direction and we are heading into a future of ecological catastrophe.” Time is of the essence, she said.

“If we want to leave a ‘Liveable Future’ on this absolutely beautiful planet that God has enabled us to collaborate in and live in, we need to change course. We need an ecological conversion. I firmly believe that faith communities and the Catholic Church in particular have a very significant role to play in this.”

Josianne Gauthier, Secretary General of CIDSE, said that even though she was aware of how bad things are, she was also constantly inspired by really impressive people on the ground, who have messages of change and of conversion.

“And so it is about listening to those, it is about changing the way we work and the way we think. We have to stop thinking so top down and we have to start thinking in a much more open and synodal way, which is to include all voices and to start to recognise wisdom where we have not expected it.”

“I am working with a group of people on retrofitting our homes. If that was organised on a parish level, with the support of theology and spirituality behind it, it would be wonderful. It would help us to take this from being ‘out there’ into ourselves. So, at every level, we are going to have to factor this into our prayer, into our theology, into our practice, into our ethics and into our way of living. It has to be integral to our way of living.”

Fr McDonagh said Churches needed to work together collaboratively and ecumenically on this issue.

This was echoed by Dr Lorna Gold who told the webinar, “I think that faith communities right across the world are absolutely key” to “moving the dial” to try to deal with the reality of ecological destruction and continuing rising emissions.

“Why do I say that? Because the Catholic Church and faith communities are the most organised sector of civil society. Faiths are the ones that talk about sacrifice, about courage, about compassion. That can enable the maximalist approach to solving this crisis; it can enable us to be our best selves and to step up as heroes, as prophets, and to give our all - because that is what it is going to take. It is going to take every person, every institution, prioritising ecological conversion, in order to bring the change we need in the timeframes that we now require.

“If faiths were to mobilise their resources in a systematic way, in a way that fosters collaboration, in a way that energises people, and in a sense, puts our money where our mouth is, quite literally, the faith communities can move the dial enough, I believe. It can be the catalyst for change that the world needs today. What is a tragedy can become, as ‘Let Us Dream’ talks about at the very end, the Kairos moment that needs to happen.”

Emma Gardiner from the Diocese of Salford spoke to the webinar about the Guardians of Creation project which is looking at developing a framework to support decarbonisation at a diocesan level.

At the webinar “How can the Catholic Church mobilize to use her land for good and help indigenous people?” Sr Alessandra Smerilli, who is the Acting Secretary at the Vatican's Dicastery for Promoting Integral Human Development, said the message of Pope Francis on the issue of the environment is clear.

“Laudato Si’ pleaded with entire human family to take seriously the urgent challenge to our common home and to seek a sustainable and integral development. Six years after its publication, the words of the Pope still ring true to our current situation,” she said.

According to Sr Alessandra, the Covid-19 pandemic had made it evident that an integral approach is the key to a collective response.

“The cry of the earth, as Pope Francis put it, does not exist apart from the cry of the poor. And so, an integral ecology is inseparable from the notion of the common good,” she said.

“Like the members of the indigenous communities, the Church also recognises that this land was given to us by God, not for us to dominate and exploit, but for us to till and keep. We are not the owners of the land. We are its keepers, and its care is entrusted to us not as farmers or politicians or businesspeople but as human beings.”

The Vatican official highlighted the aims of the Laudato Si Action Platform, which is a project of the Dicastery for Promoting Integral Human Development. The platform, which is being officially launched on 14 November, seeks to bring together people through seven categories: families, dioceses, business, healthcare organisations and care services, schools and universities, to engage in a seven-year journey to respond to the call of Laudato Si’ with seven Laudato Si’ objectives.

“Through this platform, we hope to provide a global space for people to come together to plan our collective response to the environmental crisis. The aim of the platform is to connect people and make people aware of the efforts everyone is doing. I invite all of you to be part of the community we are building,” Sr Alessandra said.