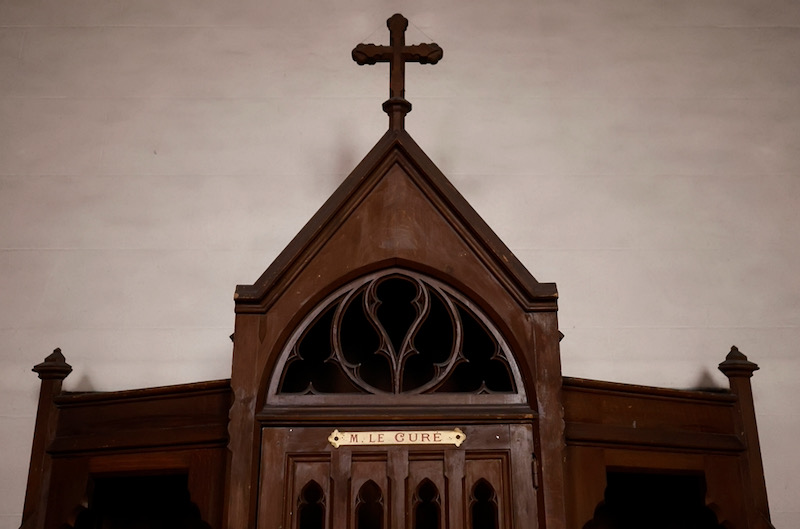 Seal of confession debated in France after abuse report 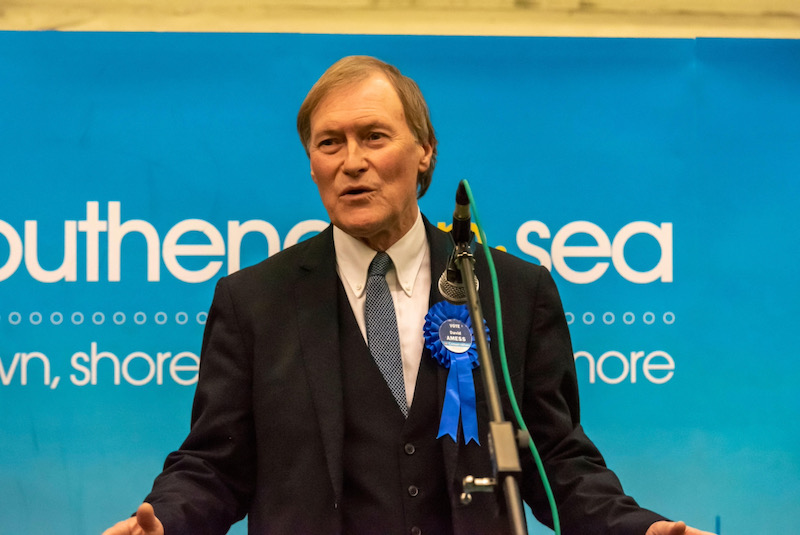 Sir David Amess was a much-loved and respected constituency MP, and a committed Catholic.
Avpics/Alamy

Sir David Amess, Conservative MP for Southend West and a committed Catholic, has died after being stabbed in a church in Essex.

Sir David, 69, married with five children, was stabbed multiple times while doing a constituency surgery at a Methodist church in Leigh-on-Sea, Essex shortly after noon today and died in spite of attempts by paramedics to save him at the scene. A man aged 25 was arrested on suspicion of murder and is in custody.

He is the second MP to die from a stabbing attack in just over five years. Labour MP Jo Cox was murdered in June 2016.

Flags were flying at half mast at Downing Street as tributes poured in.

Archbishop of Westminster Cardinal Vincent Nichols said: “The tragic death of David Amess creates a painful loss in so many lives. I pray for him that he be welcomed into the merciful presence of Our Heavenly Father. I pray for his family and friends, those reeling from shock at this time. I pray for his constituents all those who worked with him in his political career.

“This death throws a sharp light onto the fact that our Members of Parliament are servants of the people, available to people in their need, especially in their constituencies. This horrific attack, as David was undertaking his constituency surgery, is an attack on our democratic process and traditions.

“David carried out his vocation as a Catholic in public life with generosity and integrity. He served in Parliament for four decades and was respected by all political parties across the House. His untimely death is a great loss.

“David Amess, as a Catholic, understood the role and importance of the Holy See. It was he who, in 2006, established the All-party Parliamentary Group for relations with Holy See Group, a Group including people from different faiths and beliefs. Over the years he led several parliamentary visits to Rome. He was instrumental in the historic visit of Pope Benedict to Parliament in 2010 and in the return visit by HMG representatives to Rome in the following year. He fostered this mutually respectful relationship through meetings with Cardinal Parolin, the Pope’s Secretary of State, and with other Catholic leaders. This contribution is both esteemed and will be sorely missed.

“I pray for the repose of his soul. May he rest in peace.”

Prime minister Boris Johnson said: “All our hearts are full of shock and sadness today at the loss of Sir David Amess, killed in his constituency surgery in a church after almost 40 years of continuous service to the people of Essex and the UK.” He said that Sir David was among the “kindest, nicest and gentle people in politics” and had an “outstanding record of passing law to help the most vulnerable from people suffering from endometriosis, passing law to end cruelty to animals and doing a huge amount for people suffering from fuel poverty”. 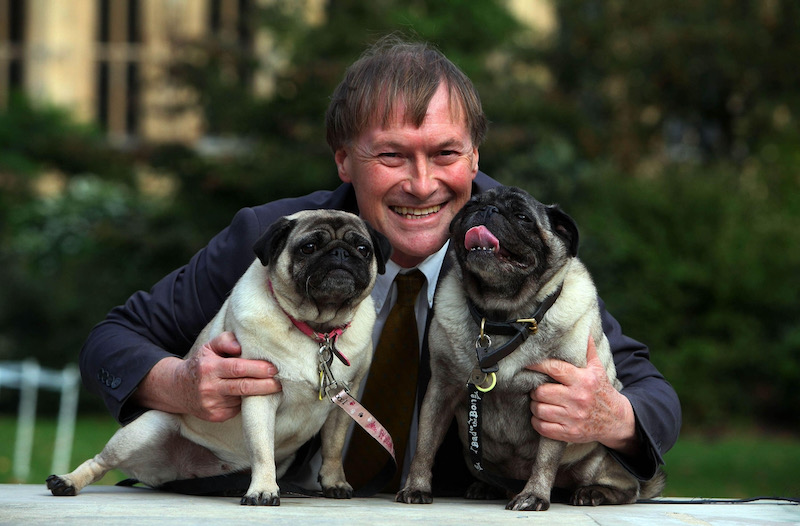 Sir David Amess, pictured here with his pugs, Lily and Boat at the Westminster Dog of the Year competition at Victoria Tower Gardens in London, was known to be an animal lover. Pic: PA/Alamy.

Theresa May said: “Heartbreaking to hear of the death of Sir David Amess. A decent man and respected Parliamentarian, killed in his own community while carrying out his public duties. A tragic day for our democracy. My thoughts and prayers are with David’s family.”

David Cameron said: “This is the most devastating, horrific and tragic news. David Amess was a kind & thoroughly decent man - and he was the most committed MP you could ever hope to meet. Words cannot adequately express the horror of what has happened today. Right now, my heart goes out to David’s family.”

Sir John Major said: “This is truly heartbreaking news of a good and decent man who – for over 30 years – was a dedicated public servant. My heart goes out to his family.”

Tony Blair said: “David and I came into parliament together in 1983. Though on opposite political sides, I always found him a courteous, decent and thoroughly likeable colleague who was respected across the house. This is a terrible and sad day for our democracy.”

Archbishop of Canterbury Justin Welby said: “The death of a father, husband and friend is agonisingly painful for those who loved him. The murder of an MP, in the course of caring for their constituents, is a deep blow to this country, its citizens and everyone who desires a peaceful and flourishing democracy.

“Sir David Amess dedicated his life to championing causes he believed in, serving constituents and his country for almost 40 years as a member of parliament.

“The only antidote to violence and hatred is love and unity. In this horrific and tragic moment we must come together, across political difference, and be the light that refuses to be cowed by darkness.”

Chris Whitehouse, who runs the Catholic Legislators’ Network of which Sir David was an active member, said: “I’m in state of profound shock. David and I have worked together on campaigns since we both started in Westminster in 1983. He was always such a gentle and gentile man, exuding charm and genuine compassion in equal measure. Parliament, his party, and his family are all poorer for his passing. May he rest in peace and may perpetual light shine upon him, and may his family be consoled”.

Father Jeffrey Woolnough, parish priest of the St Peter’s Eastwood in Southend-on-Sea, where a vigil is due to be held this evening, said Sir David was a true friend to everyone.

He says he was a "wonderful, wonderful man" - "an eastender, you know? Like me."

“All of the Christian community and others that know him from all different faiths will all be saying the same thing – what on Earth has happened? Why has this happened? I'm shaking talking to you at the moment because I can't even begin to understand why this has happened.”

He told the BBC: “What he's brought to his area is a friendship to everyone who wants his ear and he's died doing that, that's the remarkable thing. He's died serving the people.”

Sir David was a patron of Right To Life UK. Catherine Robinson, spokesperson for the charity, said: “Sir David’s death is a senseless tragedy and he will be truly missed. Our thoughts and prayers are with his wife Julia and their five children. We have had the honour of working with Sir David over the years across a number of issues and he was a passionate and dedicated patron of our charity.”

She added: “Sir David was a pro-life champion. Since he was elected in 1983, he always, where possible, used his position as an MP to stand up for the vulnerable, including championing initiatives to introduce more protections for unborn babies and more support for women facing crisis pregnancies. Everyone who worked with Sir David knew him to be a kind, caring and jovial man, who showed real care for the most vulnerable in our society.”

Archbishop of York Stephen Cottrell said: “I had the great honour of calling David Amess a friend when I was Bishop of Chelmsford. He was the MP for the constituency where I grew up, and not only did he always faithfully serve those people and that place, but had a particular concern for the Christian community born of his own deeply held Christian faith as a member of the Roman Catholic community. It is shocking that someone so dedicated to his community and public service was the victim of such violence as he went about his elected duty. It is hard to make sense of the horror of what has happened this afternoon but he and his family and those he loves are in my prayers.”