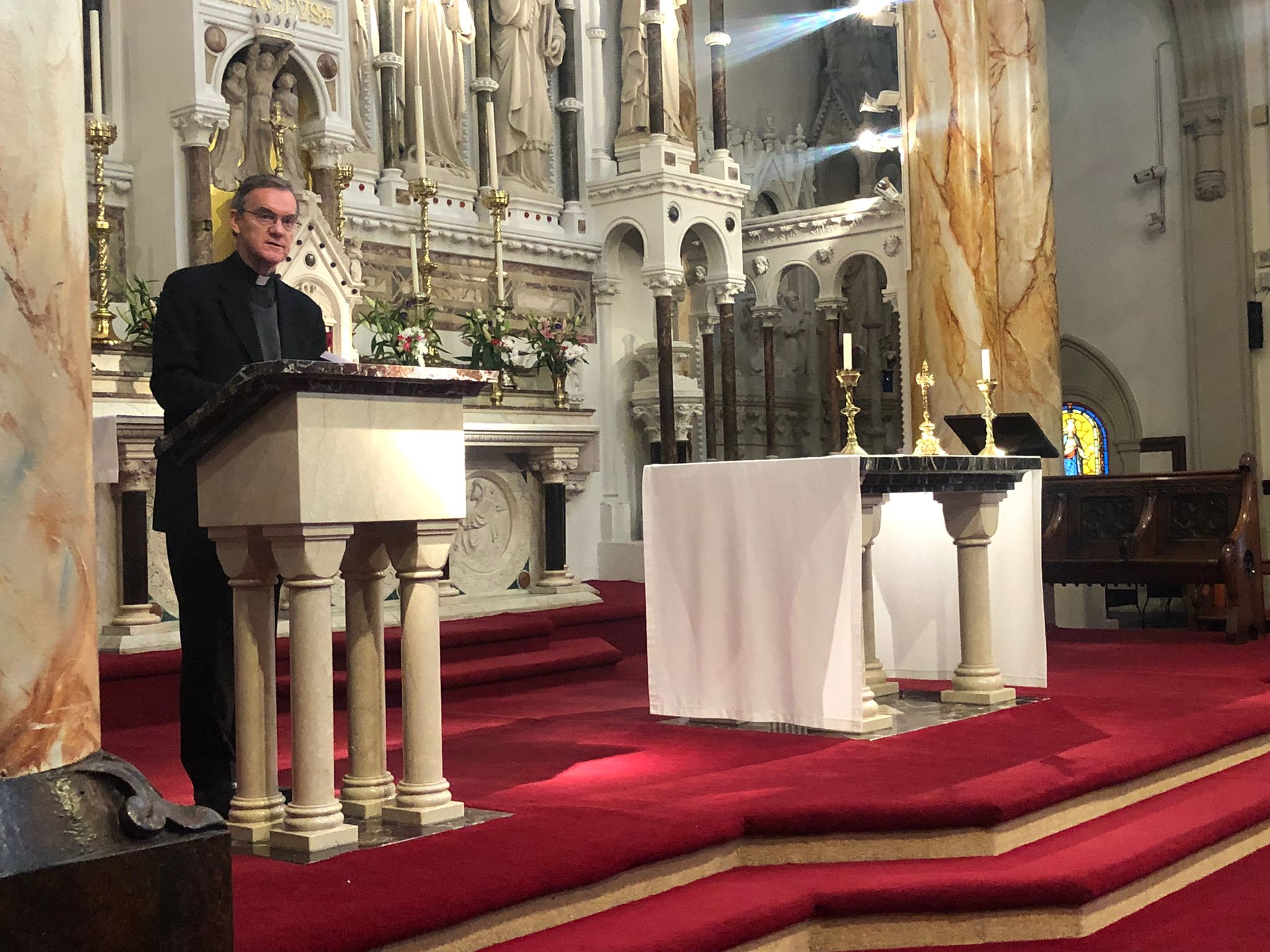 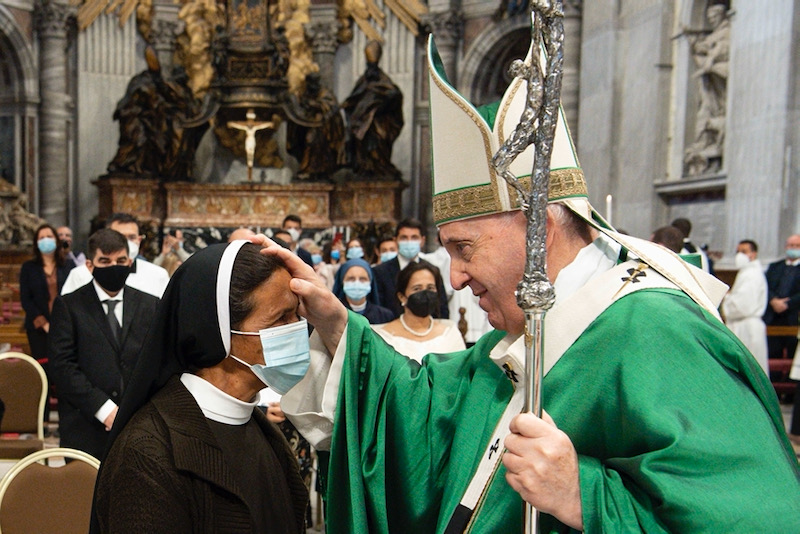 Pope Francis blesses Sister Gloria Cecilia Narváez Argot, a member of the Franciscan Sisters of Mary Immaculate, who was kidnapped in 2017 and released earlier this month.
CNS photo/Vatican Media

A Franciscan nun from Colombia, who was abducted in 2017 by Islamists in Mali, has been freed. Gloria Cecilia Narvaez, 59, was released last Saturday, and the following day was in Rome, being greeted by Pope Francis. On Saturday, Sr Narvaez met with Mali’s interim President Assimi Goita. “I thank the Malian authorities, the president for all the efforts made so that I am free,” she said on state television, “and I am very happy, I stayed healthy for five years, thank God.” Cardinal Jean Zerbo, Archbishop of Bamako, thanked “Malian authorities and other good people who made this release possible”.

A new Catholic bishops’ conference was created for Central Asia last month, bringing together Church leaders from Kazakhstan, Uzbekistan, Kyrgyzstan, Turkmenistan, and Tajikistan. It is an opportunity for the maturation of the Church in that region, according to Bishop Adelio Dell’Oro, the Italian-born Head of Karaganda Diocese, Kazakhstan. "We are very happy,” he said; “we will have the opportunity to give greater meaning to our mission here, 30 years after the independence of these countries, to be in a territory with a Muslim or Orthodox majority.” The new body was officially established by the Congregation for the Evangelisation of Peoples on 8 September.

Christian legal experts have told the Christian Conference of Asia, a pan-Asian ecumenical Christian forum based in Thailand that Asia falls short on nurturing and protecting religious freedom. “Although a majority of Asian countries have strong constitutional provisions and guarantees to secure their citizens’ freedom of religion and belief, there are severe shortcomings in interpretation and implementation,” they reported during the recent Asia Regional Consultation on “Freedom of Religion, Rights of Religious Minorities and Constitutional Guarantees in Asia”.

A devastating drought has gripped Somalia, where Caritas is providing food supplies to displaced people, offering emergency relief, and is working in the education and health sectors. The local people are experiencing severe shortages of food and drinking water, according to its officials, while massive deaths of livestock are being witnessed. Relief efforts are being inhibited by the activities of Islamist terrorists.

Journalists Maria Ressa and Dmitry Muratov have won the Nobel Peace Prize for their fights to defend freedom of expression in the Philippines and Russia.

The honour for Ressa was greeted with delight by Benedictine theologian Sr Mary John Mananzan, who described it as an honour for the Philippines, for “free and courageous press”, and “an honour for my school, St Scholastica’s College, because Maria Ressa went there in her childhood.” Sr Mary John, a former president of the Manila school, told The Tablet  “its educational thrust is education for justice and social transformation”. A co-founder of news site Rappler, Ressa was commended for “exposing abuse of power, use of violence and growing authoritarianism in her native country”.

Dmitry Muratov is editor-in-chief of Novaya Gazeta, an independent newspaper defending freedom of speech in Russia.

Russia's Catholic Church welcomed the award to Muratov, with the bishops’ conference secretary-general praising the newspaper's work in “courageously and sincerely seeking the truth”. The award was not commented on by Russian Orthodox leaders. A message on Sunday from the Pope congratulated Russian Catholics on the thirtieth anniversary of the Church's re-establishment in the country, urging them to go on seeking unity with other Christians.

In the “worrying” condition in which Lebanon finds itself, the “absolute priority” is to try to stop the flight of young people who leave the country, the country’s Maronite bishops said. In a 6 October statement they warned of a "human haemorrhage" that deprives the nation of its more vital and creative forces.

In advance of Iraq’s parliamentary election on 10 October, the Chaldean Patriarch Luis Raphael Sako joined Iraq's most revered Shia cleric Grand Ayatollah Ali al-Sistani to urge the 25 million eligible voters to participate. However, the election saw one of the lowest turnouts in years. Some 41 percent of eligible voters cast their ballots, according to the Iraqi election commission. The main Shia Muslim blocs are predicted to win the most seats. Nine seats are reserved for minorities, including five for Christians.

Pope Francis said on Thursday last week that he plans to declare St Irenaeus of Lyon a Doctor of the Church with the title “Doctor unitatis,” meaning “Doctor of Unity.” The pope made the announcement in an address to the St Irenaeus Working Group, a group of Catholic and Orthodox theologians.

Hartford Archbishop Leonard Blair has ordered the Order of Preachers to leave their ministry at St Mary’s church in New Haven, where they have ministered for 135 years and where they built a priory. The archdiocese has been engaged in parish restructuring, which is the official reason given for the change although a source close to the Dominicans in New Haven said they believed the custody of St Mary’s shrine of Blessed Michael McGivney, founder of the Knights of Columbus, was a factor. Meanwhile in the diocese of Rockville Center, the Passionists announced they would be leaving the pastoral care of St Therese of Lisieux parish in Montauk, New York, after Bishop John Barres failed to renew the faculties of Fr Edward Beck, a Passionist priest in residence at the parish and frequent commentator on CNN. Beck has criticised those bishops who seek to deny communion to pro-choice politicians.

A convicted killer of three was executed on Tuesday evening last week despite a request for clemency from the Pope. The execution of Ernest Johnson was the first Missouri execution in 16 months and the seventh in the US this year. Johnson, 61, admitted killing three convenience store workers during a robbery in Columbia in 1994. A representative of Pope Francis wrote to Republican Governor Mike Parson asking him to grant clemency, saying the Pope “wishes to place before you the simple fact of Mr Johnson’s humanity and the sacredness of all human life.” Governor Parson, a Baptist, declined to intervene. Leaders of the four Catholic dioceses in Missouri issued a statement on Wednesday saying: “Ernest Lee Johnson’s crimes were heinous and deserve to be punished, yet as Missouri has shown itself to be a pro-life state, we should stop using the death penalty as a means of dealing with violent crimes.” Johnson's lawyers said in their clemency petition that IQ testing showed Johnson was intellectually disabled.