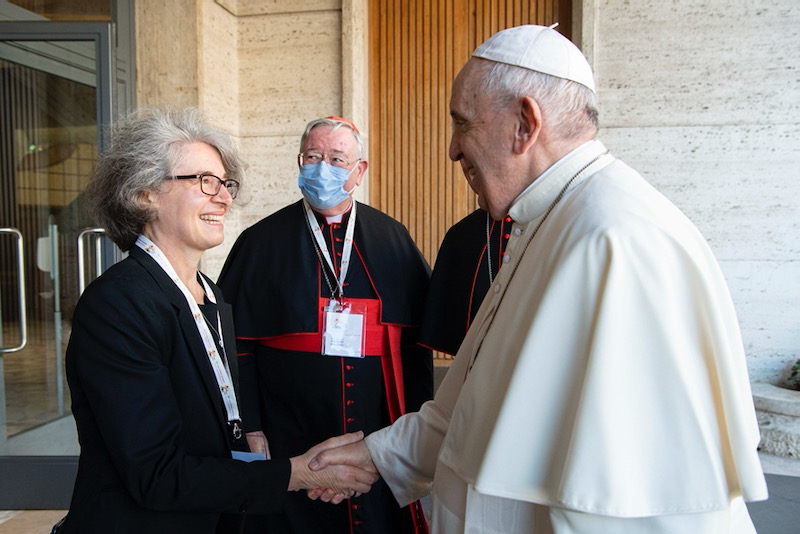 The synod is not about “pre-packaged ideas” but embracing a different path of the Church.

Pope Francis blessed Sister Gloria Cecilia Narváez Argot, a missionary from Colombia, who was kidnapped in Mali in 2017 and released in early October.
CNS photo/Vatican Media

Pope Francis said today that the Church can no longer remain “barricaded in our certainties” or hamstrung by “outworn pastoral models” as it grapples to find a roadmap for the 21st century.

During a Mass in St Peter’s Basilica to mark the start of a two-year synod process that is taking place across the world, Francis called on Catholics to embrace the “art of encounter”.

In his homily, the Pope stressed that the synod is not a “Church convention”, parliament, study group or political gathering but a “grace-filled event” that can become a “process of healing guided by the Holy Spirit”.

The synod, he explained, is not about “pre-packaged ideas” but embracing a different path of the Church, one which is more discerning, more in tune with the Gospel and better at listening.

Today’s liturgy in the Basilica was attended by dozens of cardinals, bishops and diplomats accredited to the Holy See along with representatives from across the world. They had gathered in the Vatican yesterday for an initial meeting to begin the synod process.

As shots of morning sunlight beamed through Michelangelo’s dome, prayers were said in Chinese, Arabic, Portuguese and Tagalog including for “all the baptised” to “sense the urgency to actively participate in announcing the Kingdom of God”. While Rome was the scene of the synod launch, the meat of the process is going to take place in the local churches, with the 2,248 dioceses due to begin their own synods on 17 October.

“God is not found in neat orderly places, distant from reality, but…he meets us where we are, on the often rocky roads of life,” the Pope said. “Today, as we begin this synodal process, let us begin by asking ourselves – all of us, Pope, bishops, priests, religious and laity – whether we, the Christian community embody this style of God, who travels the paths of history and shares in the life of humanity.”

Synodal reforms have taken on an urgency due to the clerical sexual abuse crisis with Germany, Australia and Ireland all announcing synod processes in the wake of abuse scandal inquiries that exposed institutional and cultural failings.

The synods are frequently referred to as a remedy for clericalism, an attitude of excessive deference to the clergy who in turn assume a position of moral superiority. The Pope has described clericalism as a “cancer” in the Church and diagnosed the misuse of power as the root cause of the abuse crisis.

“If at times we would rather take refuge in formality or presenting the proper image – the clerical and courtly spirit, where I am Monsieur l’abbé than Father – the experienced of encounter changes us,” the Pope said. “Jesus did not hurry along, or keep looking at his watch to get the meeting over. He was always at the service of the person he was with, listening to what he or she had to say.”

But the journey to a more synodal Church faces numerous obstacles including apathy, resistance and opposition from bishops while along with the delicate navigation of trying to encourage a renewal effort where the outcomes are unclear.

Reflecting on the Gospel passage of the rich man, who observes the commandments but is unwilling to sell his possessions and follow Jesus, the Pope pointed out that the Church is called to more than the “mere observance of precepts” or religious observances.

“In these days, Jesus calls us, as he did the rich man in the Gospel, to empty ourselves from all that is worldly, including our inward-looking and outworn pastoral models, and to ask what it is that God wants to say to us at this time,” the Pope said.

Faith, he told the crowd gathered in St Peter’s Square during his Angelus address after the Mass, cannot be “commercial and mechanical” with the belief that “I do this, so that God will give me that.” Instead, the Pope said, it is saying “yes” to God without a “but.”

The synod process launched this weekend will culminate with the 2023 assembly of bishops in Rome, but it is now likely the process will stretch on beyond the two-year time frame.

In a significant intervention yesterday, Cardinal Mario Grech, the leader of Rome’s synod office, suggested that the final document produced by that 2023 meeting could then be handed to local churches rather than presented to Francis. The Maltese cardinal asked whether Catholics across the world, along with their bishops, to give their “consent” to the document before it goes back to the Pope.

The proposed changes point to an emerging model of the Church that is permanently synodal, and where ordinary Catholics, priests and bishops share joint responsibility for the future mission.

Meanwhile, just before the Mass in St Peter’s began, Francis met Gloria Cecilia Narváez, a religious sister from Colombia who had been kidnapped by Islamists in 2017 in Mali. She was freed on 9 October.