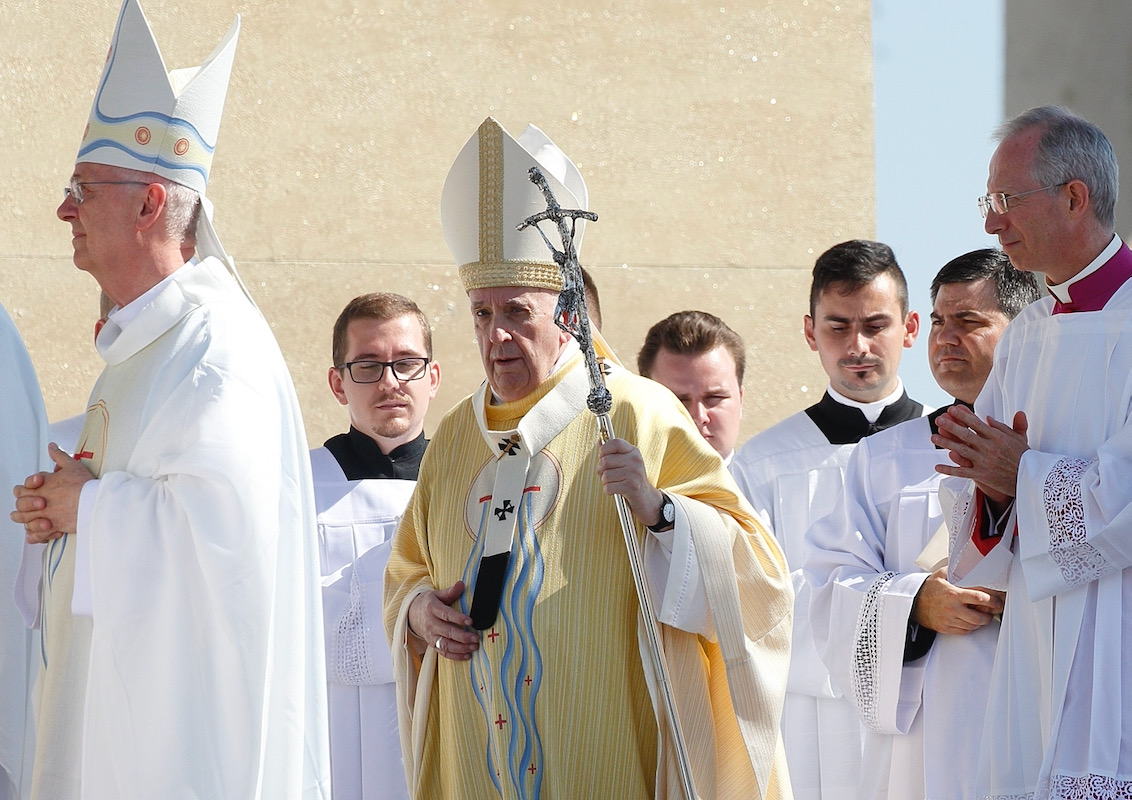 The Pope faces down nationalism in the heart of Europe 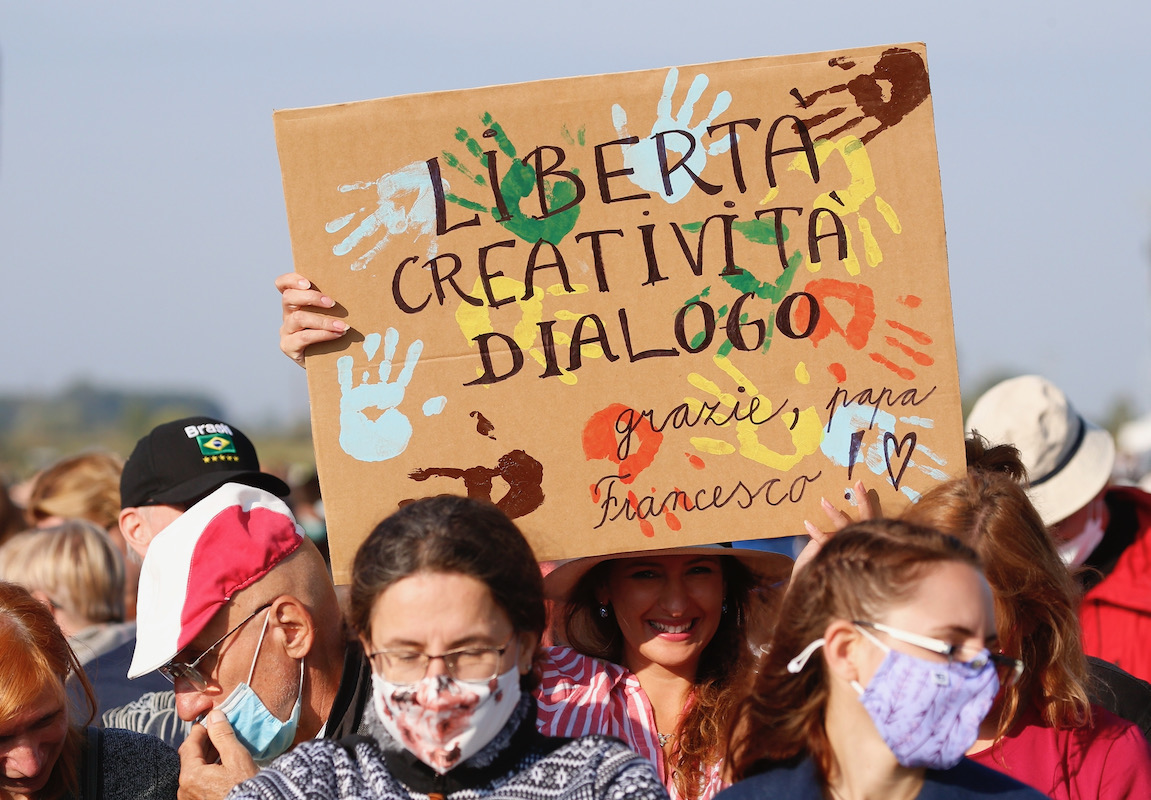 A woman holds a sign in Italian reading "Liberty, Creativity and Dialogue" as people wait for Pope Francis' arrival to celebrate Mass on the fields outside the Basilica of Our Lady of Seven Sorrows in Šaštin, Slovakia.
CNS photo/Paul Haring

Pope Francis’ visit to Hungary and Slovakia has set down a marker that the Church needs to stand as a prophetic voice against the growth of nationalist populism sweeping across Europe.

Francis has made protecting and welcoming migrants a hallmark of his pontificate, going against a rising tide of anti-migrant policies and sentiment. Other Popes might have been tempted to duck out of the battle, while plenty of other politicians seem too fearful to challenge the anti-migrant rhetoric. Francis, however, has refused to sit on the sidelines.

“Today, listening to some of the populist leaders we now have, I am reminded of the 1930s, when some democracies collapsed into dictatorships seemingly overnight,” he said in his book, Let Us Dream. It didn’t require a degree in political science to work out who he was referring to.

Not only has Francis been unafraid to consistently advocate for migrants, but he has also been willing to face down populist leaders prepared to use religious symbols or language in their quest for power.

While in Budapest, Francis came face-to-face with Viktor Orbán, the Prime Minister of Hungary, who has presented himself as a defender of “Christian values” by refusing to welcome refugees from Muslim countries. Orbán has also stoked tensions with the Roma community and is accused of using anti-Semitic tropes during election campaigns.

Although the meeting between Francis and Hungary’s prime minister and President was described as cordial, Orbán used the encounter to make his feelings known about Francis’ pro-migrant stance. In an extraordinary rebuke, he presented the Pope with a letter from King Bela IV asking Pope Innocent IV for help in resisting the 13th century Mongol invasion of Hungary and Europe while telling Francis “not to let Christian Hungary perish”. This was the equivalent of President Joe Biden presenting the Pope with a copy of First Things, the US Catholic publication which is hostile to the Francis pontificate, or Rod Dreher’s book The Benedict Option, whose proposals for Christian communities to go into a quasi-exile at odds with this papacy.

Faced with the Orbán challenge, however, Francis responded with gentle but firm rebuke of populist religious nationalism. He delivered his message simply by holding up the cross.

“The cross, planted in the ground, not only invites us to be well rooted, it also raises and extends its arms towards everyone,” the Pope said during the closing Mass for the Eucharistic Congress in Budapest. Orbán was siting in the front row.

Later, while in Presov, Slovakia, the Jesuit Pope warned that the cross should never be used as a political symbol or used to present “a triumphalist Christianity that is important and influential.” All of this, he said, leads to a “worldly” faith, which is not truly Christian. It was hard not to recall the times that another populist “strongman” and Orban ally, Matteo Salvini, the leader of Italy’s far-right Northern League party, has kissed the cross on his rosary at political rallies.

Francis’ visit saw him issue strong condemnations of anti-Semitism and make a trip Lunik IX, in Kosice, a district that is home to the largest population of Roma people in Slovakia. This also sent a message to populist leaders who stand accused of demonising minorities.

The Pope’s stance looks like an increasingly lonely one on the world stage. His visit to Hungary and Slovakia came as Angela Merkel, known for her pro-migrant stance, prepares to leave office, Poland moves in an increasingly nationalist direction and the UK government considers plans to turn back migrant boats in the channel.

Iacopo Scaramuzzi, an Italian journalist and Vatican analyst whose book "In Fonda a Destra (God? Down on the Right)" examines the use of religion by populist leaders, says the Pope has been one of the “most explicit” voices on this topic.

“He sees that the populist rhetoric is not over, and that it risks endangering Christianity,” Scaramuzzi told me. “His analysis is that Christianity is being used as an identity marker and political tool to reassure a constituency which fears dangers and decline. But because of the instrumentalisation that has taken place in the past, he believes you have to take clear a stance against this – because it’s too big a threat.”

History is littered with examples of the disastrous results of this instrumentalisation: Slovakia, for example, became a Nazi puppet state in 1939 with the priest and politician Jozef Tiso serving as the country’s president. Today, Francis has found common cause with Zuzana Caputová, Slovakia’s first president who is an anti-corruption lawyer and environmentalist. When the Pope was in Bratislava, Caputová praise the Pope for standing against those who “want to exploit religion for political purposes”. While the Church-State relationship is always complex terrain, Francis has made it clear he wants the Church to find a “prophetic voice” that genuinely represents the concerns of the people. Trying to create something from the past is unworkable. As Francis says: “Christendom no longer exists.”