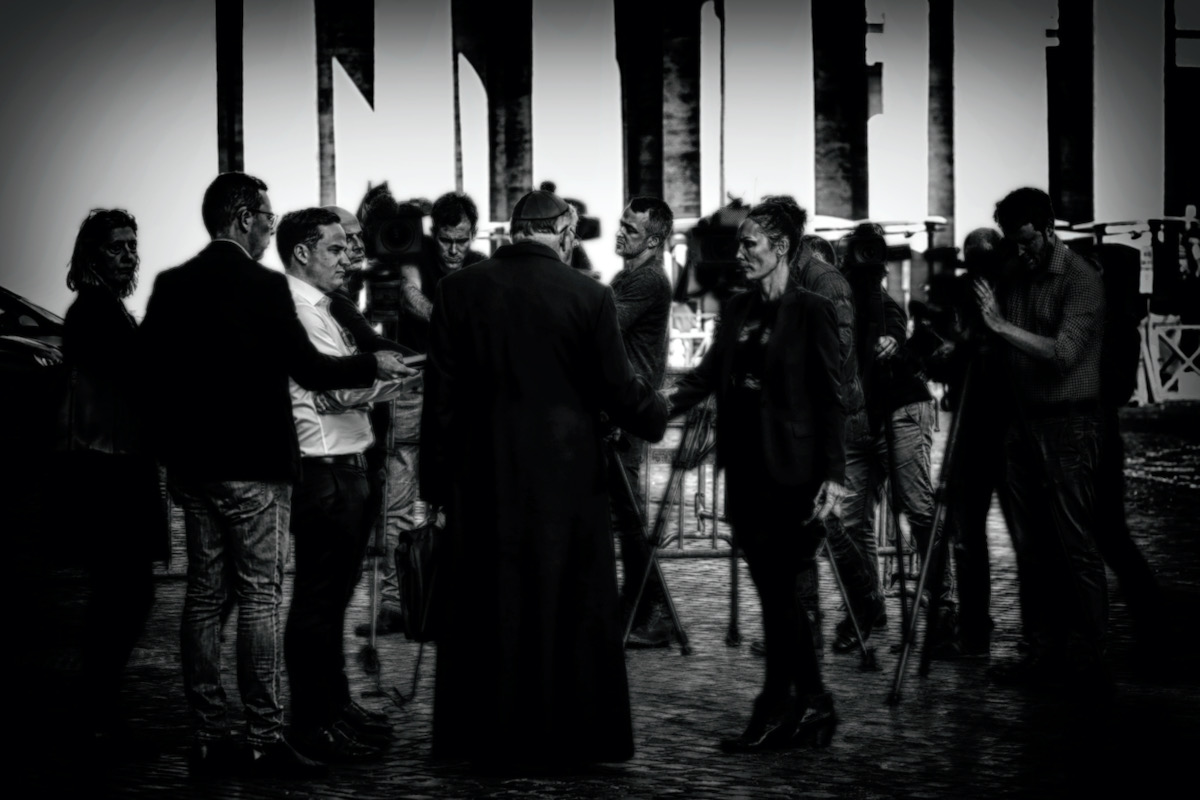 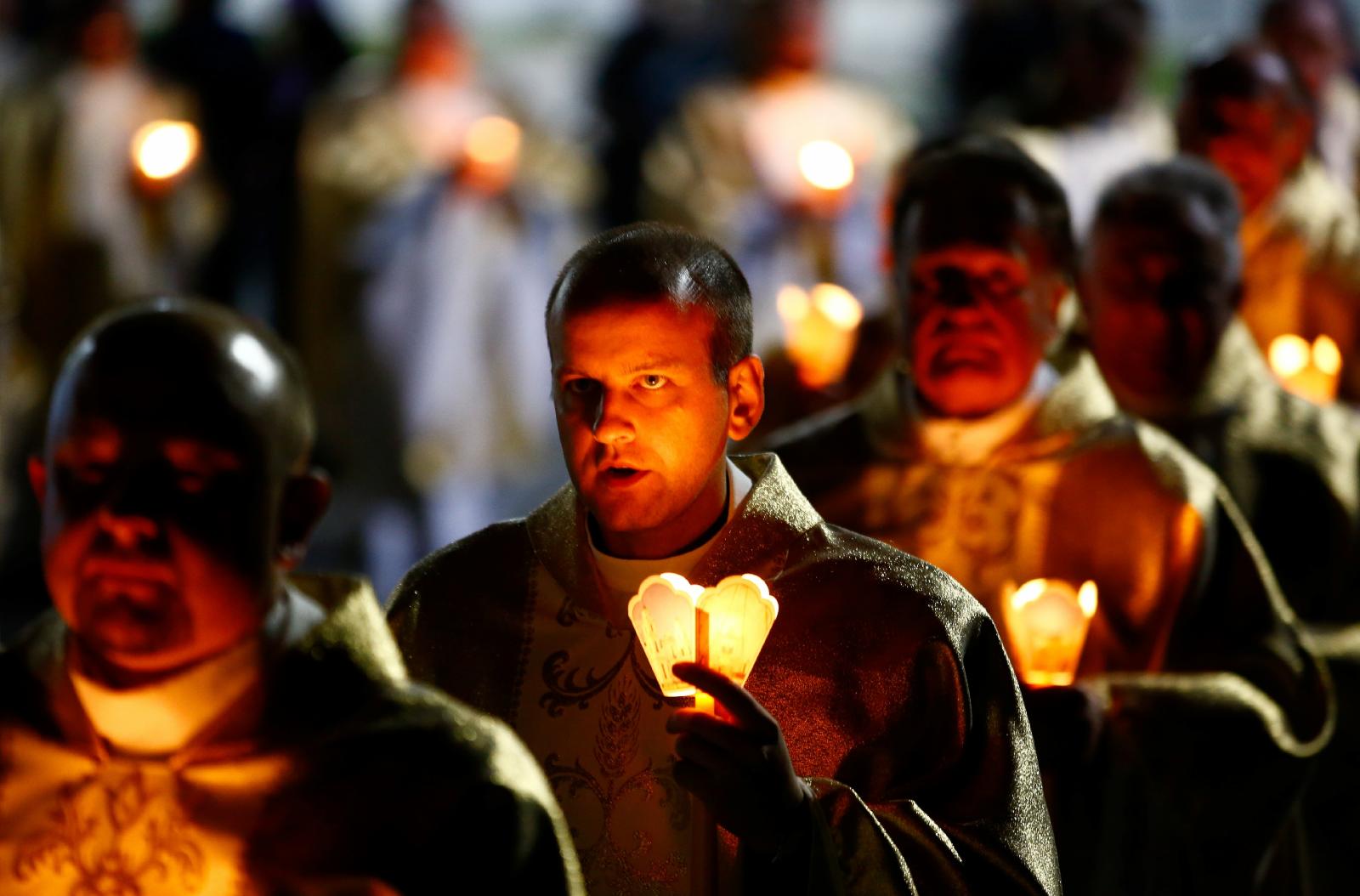 Catholic clergymen carry candles during the annual feast of the Icon of the Mother of God procession July 5, 2019, in Budslau, Belarus.
CNS photo/Vasily Fedosenko, Reuters

The authoritarian government of Belarus has reprimanded an official newspaper for equating Catholic clergy with Nazis in a cartoon, while also warning the Church's leaders not to break the country's repressive laws.

“This image on the newspaper's front page, caricaturing priests, does not reflect the state's official position towards the Roman Catholic Church”, the government's Commissioner for Religions and Nationalities, Alexander Rumak, said in a letter to Bishop Aleh Butkevich of Vitebsk, the Bishops Conference chairman. “But we also hope Catholic priests will always be guided by our current legislation, thus contributing to continued constructive cooperation between the state and Catholic Church in Belarus”.

The letter was published after a written protest by the Bishops Conference and expressions of concern by the Vatican's Croatian nuncio, Archbishop Ante Jozic, at a meeting last week with Belarus's Foreign Minister, Vladimir Makei.

However, the Minskaya Prauda daily, which belongs to the Belarus capital’s regional government, defended the cartoon, which depicted four priests with pectoral crosses turning into swastikas, in front of a mock icon of Catholic clergy martyred by occupying Germans at Rosica in 1943.

It said some priests had allowed Belarus’s banned red-white flag to be displayed in their churches, and had tolerated the singing of a patriotic anthem, “Magutny Bozha” (Almighty God), which was criticised as “collaborationist” in a July speech by President Alexander Lukashenko shortly before a police raid on Minsk's Catholic cathedral.

“Some Catholic priests forgot the church is separated from the state under our constitution and rushed into politics - politics for them is a game on the side of Catholic Poland, which has its own selfish designs on our territory”, the newspaper said. “The Catholic Church has been rocked by scandals recently, compared to which the dissolution of the Knights Templar, trial of Gallileo and debunking of Mother Teresa's myth are trifles. Paedophilia, paedophilia, paedophilia - this is by no means a complete list of the sins Catholics should pay attention to”.

The Catholic Church, making up around 15 percent of Belarus's population of 9.4 million, condemned regime repression following the August 2020 discredited re-election of President Lukashenko after 26 years in power, but has been widely criticised for declining to speak out since the return last January from enforced exile of its leader, Archbishop Tadeusz Kondrusiewicz.

However, in a statement last week, Bishop Butkevich said the Minskaya Prauda cartoon had “deeply offended” Catholic religious feelings and incited public hostility towards the Church in the run-up to Belarus's National Unity Day on 17 September.

Speaking after his Minsk talks with Vladimir Makei, Archbishop Jozic told the Church's Catholic.By online news agency he was confident President Lukashenko's government did not “support any actions aimed at inciting hostility towards members of any religious community”.

Meanwhile, Alexander Rumak, the Religions Commissioner, said the Catholic Church was Belarus’s second “traditional denomination” numerically after the predominant Orthodox church, adding his ministry had notified Minskaya Prauda of “the inadmissibility of such publications”.

However, the official daily hit back, accusing “certain representatives of the Catholic Church” of behaving “not as clergy, but as radicals”, adding that the Church's “highest ranks” had given help to Nazi war criminals attempting to flee Europe after the Second World War.