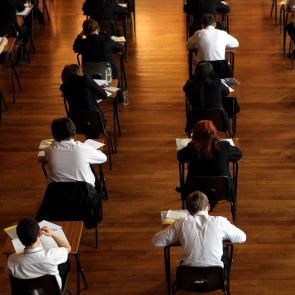 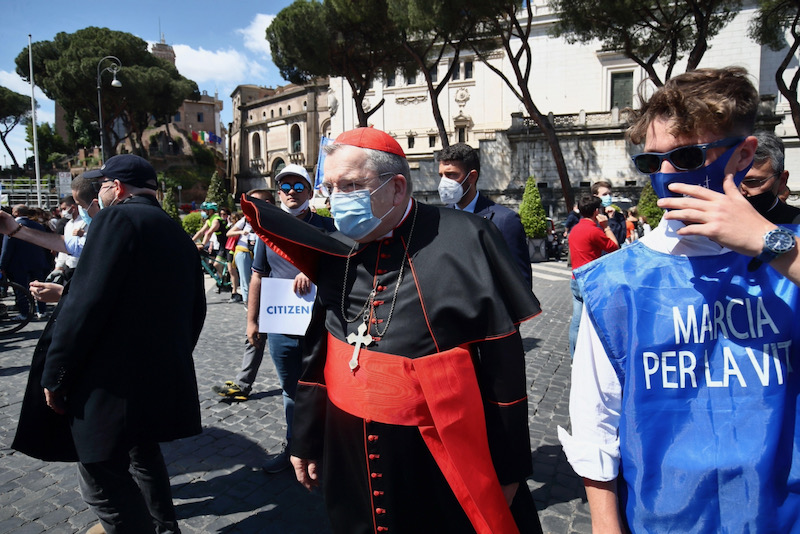 Cardinal Burke in Italy in May this year, at March for Life.
Grzegorz Galazka/Mondadori Portfolio/Sipa

US Cardinal Raymond Burke, who was hospitalised with Covid and placed in intensive care, has letter a letter of gratitude via twitter after coming out of intensive care. “Praised be Jesus Christ!” the letter begins. “In the Sacred Heart of Jesus and through the Immaculate Heart of Mary, I express deep gratitude to God, who has brought me to this point of healing and recovery. As previously communicated by the leadership and staff of the Shrine of Our Lady of Guadalupe, for whom I also express my profound appreciation, I am no longer intubated with a medical ventilator.  I have been transferred out of the Medical Intensive Care Unit and settled in a hospital room where the doctors, nurses, and numerous hospital staff have provided vigilant, superb, and steadfast medical care. For these dedicated professionals, too, I offer heartfelt thanks, as well as to the priests who have ministered to me sacramentally … To those who have offered innumerable Rosaries and prayers [and] I am also particularly united to all victims suffering from the effects of the Covid-19 virus.”

An elite unit of Italy’sCarabinieri police has solved a 429-year-old cold case involving the death of one of Renaissance Europe’s most prominent military commanders. Alessandro Farnese, the Duke of Parma, was a leading condottiero or general who fought in the Netherlands on behalf of Philip II, the king of Spain, and took part in the Spanish Armada, that invaded England in 1588. There has long been speculation that he may have been poisoned by one of the many military and political enemies he made during his lifetime. His remains were exhumed from the Church of Santa Maria della Steccata in Parma last year so that tests could be conducted on his bones. They found no traces of poison in his bones or teeth and instead concluded that he most likely died of pneumonia. He was suffering from gout and had a fractured right arm due to a shot from a musket.

Nearly 18 years after the opening of the canonisation cause of Albino Luciani, better known as Pope John Paul I, his beatification could be given the green light this autumn after the approval of a miracle that has been presented of a scientifically inexplicable healing of an Argentine girl, according to an article by Stefania Falasca – a journalist and the vice-postulator of his cause published in the Italian newspaper Avvenire.

A Brazilian bishop resigned on Wednesday 18 August, less than a week after a video spread on social media that featured someone, purported to be him, masturbating. The Vatican announced that Pope Francis accepted the resignation of Bishop Tomé Ferreira da Silva, 60, of Sao Jose de Rio Preto, who confirmed to local newspaper Diario da Regiao that it was, in fact, him in the video, but provided no additional comment. The bishop has been subject to other Vatican investigations — including covering up reports of sexual abuse —  and many in his diocese have petitioned for his removal since 2014. Meanwhile Pope Francis has accepted the resignation of Bishop of Broome Christopher Saunders. A Vatican statement contained no further detail — other than to appoint Bishop of Geraldton Michael Morrissey as interim administrator of the Diocese in Western Australia. The 71-year-old Bishop has been dogged by allegations of misconduct — both sexual and management-related — in recent years. Both the Vatican and Western Australia police launched separate investigations into his behaviour. He has strongly denied any wrongdoing.

An upcoming biopic on the early years of St Pio of Pietrelcina, or Padre Pio, has secured Shia LaBeouf in the starring role. To get into character, the Transformers star spent a few weeks with a Capuchin community in Northern California. In a video taken by Fr Hai Ho, a Capuchin from Our Lady of Angels in Northern California, LaBeouf said: “I’m Shia LaBeouf and I’m completely immersed in something way bigger than myself. I don’t know if I’ve ever met a group of men as immersed in anything in my life. It is super attractive to see people giving themselves to something so divine.”

Pope Francis appointed Mgr Guido Marini, 56, as Bishop of Tortona,Italy. Since 2007 Mgr Marini has been the master of pontifical liturgical celebrations. (See View from Rome).

Most United States bishops are resisting efforts by some Catholics to claim a conscientious objection in the face of an increasing number of vaccine mandates. Since the federal government gave the Pfizer vaccine final approval, many companies and schools are requiring workers and students to get vaccinated in order to return to in-person work or study. The National Catholic Bioethics Center placed a sample exemption letter on its website and the bishops of Colorado endorsed having pastors offer them when asked. However, New York Cardinal Timothy Dolan, Los Angeles Archbishop Jose Gomez and most other bishops have instructed their clergy not to sign such letters because there is nothing in the Catholic faith to justify a conscience exemption.

French President Emmanuel Macron on Sunday visited Iraq’s northern city of Mosul. Macron began his visit by touring the Our Lady of the Hour Catholic Church, that was badly damaged during the 2014-17 rule of Islamic State. Iraqi children dressed in white and waving Iraqi and French flags sang upon Macron’s arrival.

Bishop Felix Genn of Münster, Germany, who co-chairs the Synodal Path’s forum on priests said he is “sceptical” about exempting Catholic priests from celibacy. In an interview with the Bistumspresse publishing group in Osnabrück he said he accepted that people were deciding not to become priests because they did not feel called to celibacy. “Perhaps they will then choose another profession in the Church,” he added. “As a bishop, I also see my responsibility to the universal church.”

Francehas declared a medieval chapel a national monument after a photo on social media showed the former way station for pilgrims to Santiago de Compostela was now being used as a car park. The structure is the last remnant of the twelfth-century Hospital and Priory of Saint James, an important stop in Bordeaux for pilgrims en route to Spain. It has been used in recent decades as a car park. The photo, which caused an uproar that led to a movement to protect it, shows vehicles parked on the right side of the nave, under Gothic arches, with a lane for them to enter and exit on the left. The chapel was turned into a theatre after the French Revolution, returned to religious use afterwards, but later sold to private owners.

Belgians in Flanders and Wallonia can now to attend church without pandemic rules on the size of congregation and social distancing, but the federal capital Brussels retains them because the rate of vaccination lags there.Belgian bishops stressed that face masks were still required under the new rules that went into effect on 1 September. In Brussels, congregations at religious services remain limited to 200 people inside and 400 outside a house of worship.

La Trappe, one of the two Dutch abbeys brewing genuine Trappist beer, has produced an alcohol-free version to appeal to a growing demand from younger consumers. There were such long lines of curious customers at the abbey near Tilburg in the southern Netherlands when it went on sale recently that the shop there limited sales to six bottles per person.La Trappe Nillis beer is an amber-coloured brew whose name refers not only to the percentage of alcohol, but also to the river Nile that rises in Uganda. Part of the profits will help finance a Trappist abbey there.The abbey’s Brother Isaac told local Brabant radio the monks might change their drinking habits now that they can choose an alcohol-free beer. “We’re the worst buyers of our own beer," he laughed. "We live here according to a vow of sobriety, so for now there’s just water on the table."