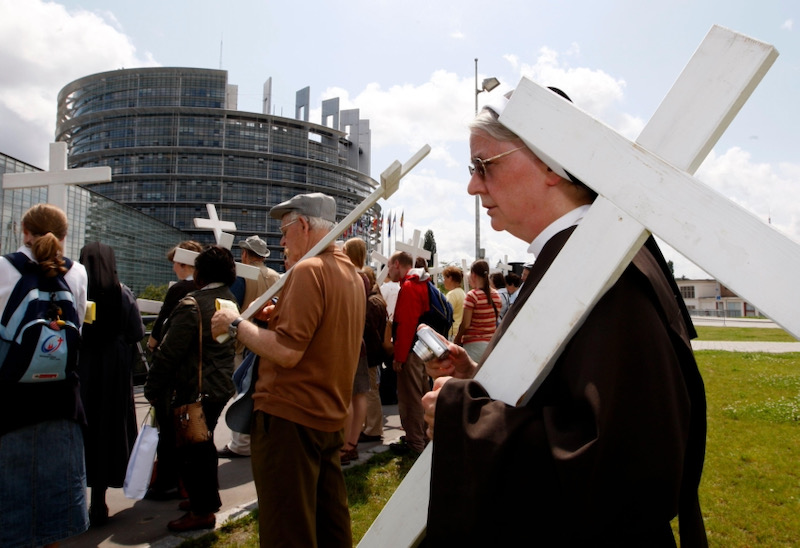 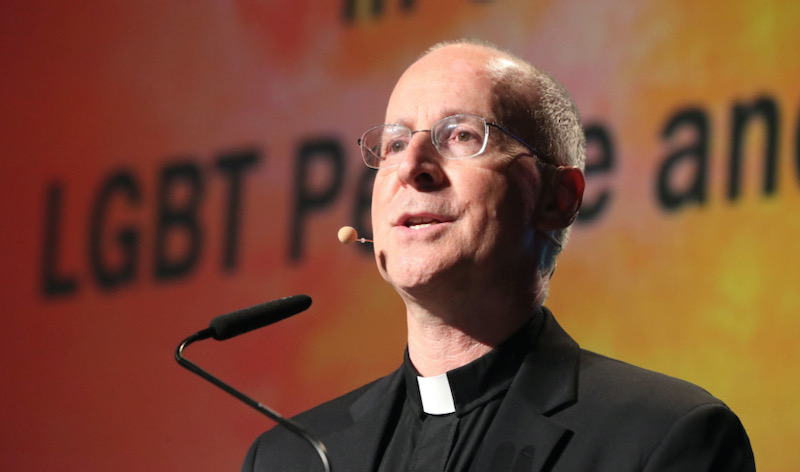 Pope Francis has given a powerful endorsement of Fr James Martin SJ’s ministry to gay Catholics in what is a significant step towards a more pastoral and inclusive approach by the Church to the LGBT community.

Writing in a letter to the New York-based Jesuit priest and author, Francis thanks Fr Martin for his “pastoral zeal” and his “ability to be close to people.”

This approach, the Pope says, emulates the “closeness that Jesus had" and “reflects the closeness of God”. Francis also promises to pray for the priest’s “flock” and “all those whom the Lord places in your care”.

The Pope’s intervention is the first-ever written papal endorsement of a priest's ministry to LGBT Catholics and it comes after the sustained, and at times vitriolic, opposition Fr Martin has faced in his efforts to encourage the institutional Church to adopt a more sensitive, respectful and inclusive approach to gay and lesbian Catholics.

Among those who have denounced the Jesuit priest's work include bishops in the United States, with some anonymously briefing a media outlet last year to claim the Pope had expressed “anger” with Fr Martin.

Francis’ handwritten 21 June letter, however, is perhaps the highest praise any ordained minister of the Church could expect to receive from the Successor of St Peter.

The Pope’s words will also provide encouragement to LGBT Catholics, many of whom were dismayed by the Vatican’s doctrinal office ruling earlier this year forbidding Church blessings of same-sex unions because God “can’t bless sin.” 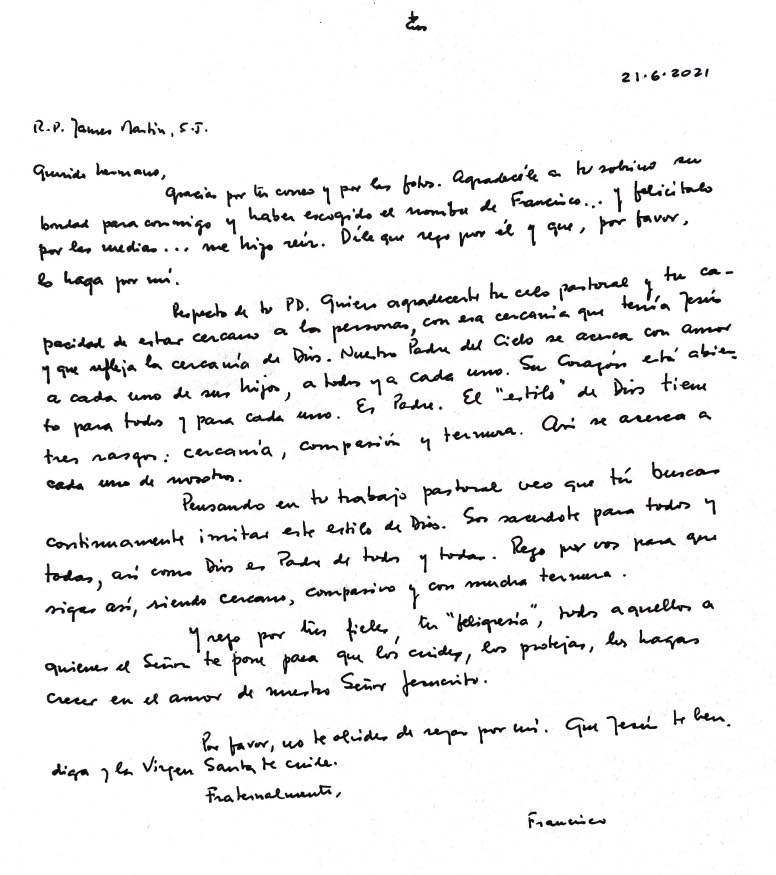 In stark contrast to the legalistic language used by the Congregation for the Doctrine of the Faith in their blessings document, the Pope’s letter stresses that God’s “style” has three elements: closeness, compassion and tenderness.

Fr Martin, 60, is Editor-at-Large of America, the Jesuit Media outlet, and has a popular following for his writing and media ministry focussed on the essentials of the Christian faith and the spirituality of St Ignatius of Loyola, the founder of the Jesuits (Society of Jesus).

It is only in recent years that he has included the LGBT community in his work, seeking to devise an approach that is both pastorally accommodating and obedient to Church tradition.

Francis’ letter was a reply to Fr Martin who had sent the Pope a note explaining that his nephew had taken the name Francis at his confirmation. At the end of the letter, the Jesuit priest also reminded Francis about a 26 June conference on LGBTQ Catholic ministry. On an earlier occasion, Fr Martin had asked if Francis would send a message to the online gathering. The Pope’s reply was first shared with the conference participants.

After sharing Francis' letter with the conference, Fr Martin posted it on social media. "It is a beautiful message of encouragement for all who work with LGBT Catholics and for LGBT Catholics themselves," he said of the note. The Pope allows the recipients of similar letters to allow if they want to make them public.

In his book, Building a Bridge, the priest urges the Catholic Church and the LGBT community to forge a relationship based on respect, compassion and sensitivity and a documentary, which takes the same name as the book and follows Fr Martin in his work, has just been released. The film premiered at this year's Tribeca Film Festival in New York and had Martin Scorsese as Executive Producer.

The documentary reveals the groundswell of support for Fr Martin has received from ordinary Catholics along with the impact his ministry has had on families and individuals, some of whom have felt marginalised or ignored by the Church. Among those who the priest has supported is Christine Leinonen, a Catholic, whose son, Christopher, died in the 2016 Orlando nightclub shooting which killed 49 people. It was the most violent attack on the gay community in US history.

On the other hand, the film also features Michael Voris, the leader of the Church Militant media platform, who regularly produces videos denouncing Fr Martin. As a result of his outreach to gay Catholics, the Jesuit author has experienced a torrent of unpleasant comments on social media and had talks cancelled.

Although much of the opposition comes from the fringes of ecclesial life, it has also included Archbishop Charles Chaput, the retired Archbishop of Philadelphia and a prominent conservative leader. He has criticised Fr Martin for causing “confusion” and that the priest “does not speak with authority on behalf of the Church.”

Last year, the Catholic News Agency, a media outlet in the United States, went further and quoted an anonymous bishop who claimed that, during a private meeting with a group of bishops in the Vatican, the Pope was “most displeased about the whole subject of Fr. Martin”, and showed “anger” about the matter. The bishops, according to the article, had been discussing Francis’ private audience with the Jesuit priest on 30 September 2019, which was a signal of papal support for Fr Martin’s work. An archbishop later went on the record to dispute the Catholic News Agency article. 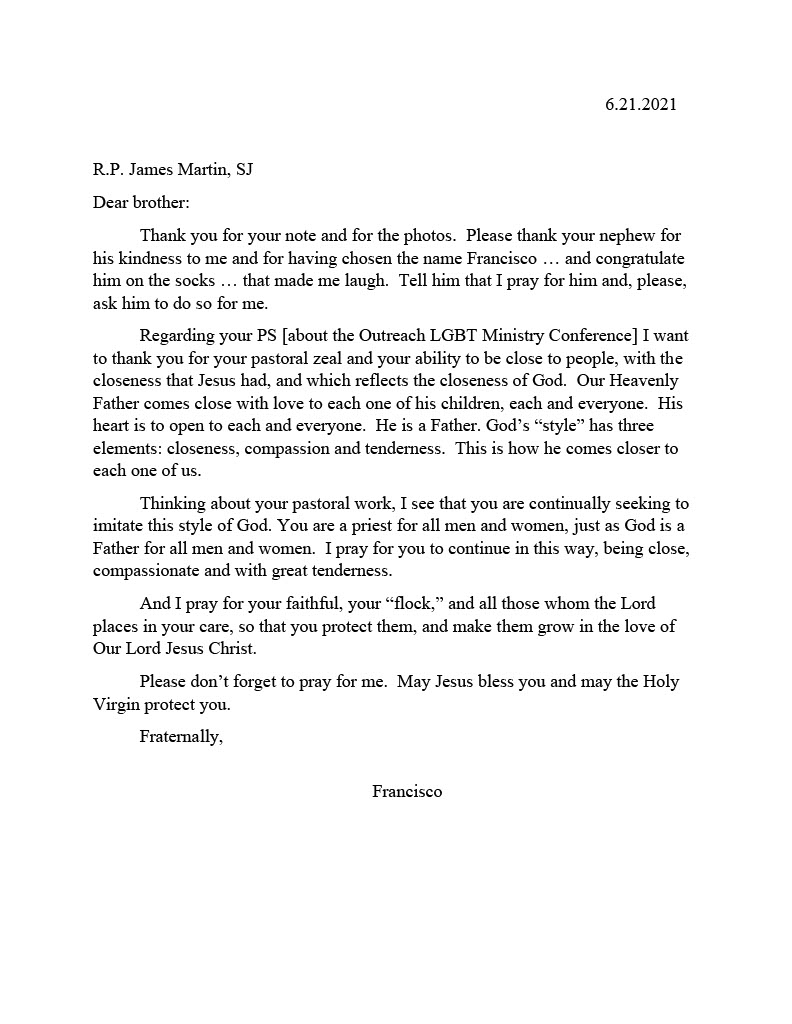 Fr Martin’s ministry to LGBT Catholics has coincided with increased pressure on the Church to take more steps to readjust its approach to homosexuality, which official teaching describes as “objectively disordered.” In the past, Fr Martin has suggested this be changed to “differently ordered” and he has called on LGBT Catholics to take up their place as active members of the Church.

Since the beginning of his pontificate, Francis has sought to model a pastoral, non-judgmental approach to LGBT Catholics, something which marks a shift away from the harsh and condemnatory language used by the Vatican in the past.

Soon after his 2013 election, the Pope replied “who am I to judge?” when asked about gay priests. He later explained that he was simply paraphrasing the Catechism of the Catholic Church that, along with the “objectively disordered” description calls for gay people to be treated with “respect, compassion and sensitivity”.

Francis has not altered Catholic teaching in this area and has affirmed the Church’s opposition to gay marriage. But he has indicated his support for same-sex civil partnerships and ushered in a very different tone and approach to LGBT issues.

This careful and gradual approach is a balancing act that has sometimes been difficult to maintain. While the Pope signed off on the Vatican’s same-sex blessing ruling issued on 15 March, he later appeared to distance himself from it.

Another row is also brewing with the Holy See lobbying to amend elements of a proposed anti-homophobia law in Italy. The Vatican, although not opposed to the bill, believe it may leave the Italian church open to legal challenges should they refuse to perform same-sex marriages.

Francis’ challenge to the Church, however, is to remain attuned to the newness of the Gospel, not to become imprisoned by the past, and avoid being involved in a "culture war" over LGBT issues.

“It is an ancient practice to present oneself at times as the sole possessor of the truth, the pure, and to aim at belittling the work of others, even with slander,” the Pope said on Wednesday, 23 June.

“Following the teaching of the Apostle Paul in his Letter to the Galatians will help us understand which path to follow. The path indicated by the Apostle is the liberating and ever-new path of Jesus, Crucified and Risen; it is the path of proclamation, which is achieved through humility and fraternity.”