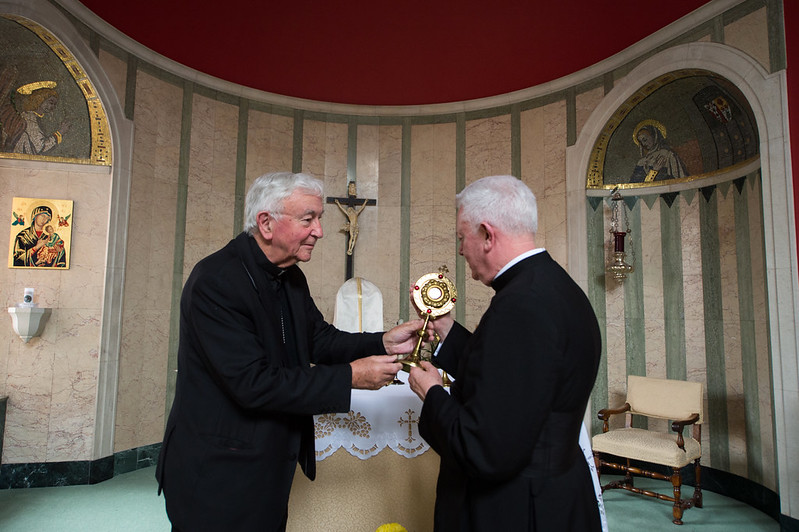 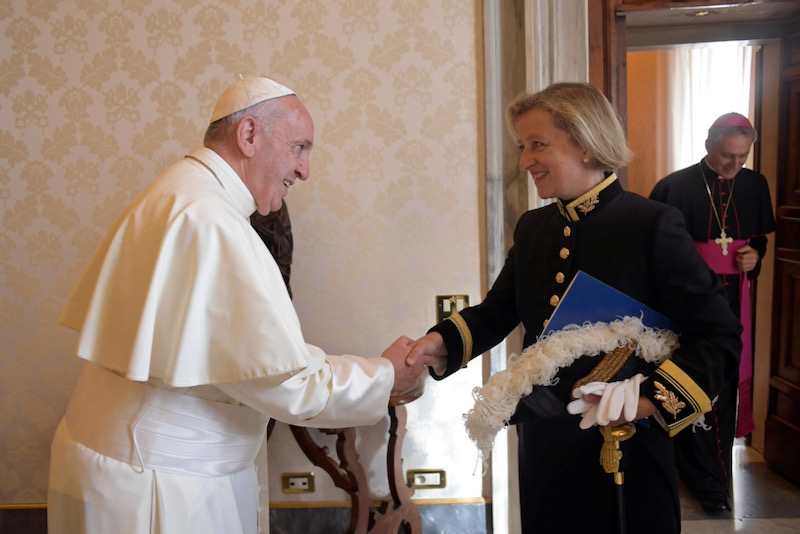 There is “definitely” a change in the Holy See in their approach to women, according to Sally Axworthy, British ambassador to the Holy See. “There are more senior appointments now…Sister Natalie Becker is the deputy in charge of synods, there’s a deputy foreign minister who’s a woman…women are increasingly being appointed to positions of real responsibility in the Vatican.”

Speaking to audience of interested members of the public, the ambassador, who is about to leave her post after five years, described reading articles about financial scandals and child abuse whilst preparing for her role, and of her surprise at the extent and pace of change she encountered when she got to Rome.

“The press the Holy See gets is not that positive, so I didn’t really know what to expect when I came here. I’ve been here during five years of Pope Francis’ papacy and you will know better than I do that it’s been a time of change for the church. So the background to my posting has been what I like to think of as the quiet revolution that Pope Francis is pursuing within the church, changing it from being focused on the hierarchy and on the rules to being focused on the faithful and vulnerable communities. That Jesuit word – discernment – has featured large in my posting, but also synodality.”

Axworthy joined the Edinburgh Jesuit Centre on 25 Mary via Zoom in a frank and wide-ranging conversation about her experience as a woman and a non-Catholic working closely with the Vatican in Rome.

The talk was part of a series called “Cannonball Conversions” organised by the Edinburgh Jesuit Centre to mark the 500th anniversary of St Ignatius’ conversion, which was prompted by his being struck by a cannonball at the battle of Pamplona.

The ambassador went on to speak positively about the €40 limit on gifts to Vatican officials and the new cardinal electors brought in under the Pope. She also welcomed the personal simplicity and austerity of Pope Francis’ own life as Pope, suggesting that she didn’t think future Popes would return to flamboyance of previous eras.

She saw many opportunities for cooperation between Britain and the Vatican, especially in areas where the Church’s “soft power” could be used to drive positive change in areas like climate change and ecology: “The UN climate change meeting is going to take place in Glasgow…so we together with the Italian embassy and the Holy see itself have been running an initiative where we’ve convened forty leaders from the world’s major religions plus ten climate scientists and we hope they’re going to issue an appeal to COP26.”

One of the greatest shocks for the new ambassador was entering a predominantly male environment as a woman, and how central questions about gender would come to be to how she saw her role there: “I did not expect to be championing the role of women at the Holy See but that has been the way its turned out. I think this has come about because one thing that’s striking about the Holy See when you get here is that there aren’t very many women in senior positions.

She added: “It also struck me that the work of the religious sisters wasn’t very recognised by the Holy See. Often the really practical thing in terms of supporting victims of sexual violence, or running schools, running hospitals, a lot of these things were being done by the sisters. And yet there wasn’t much visibility, say, in events of the sisters. So as an embassy if we ever did events I would always invite the sisters to come and present about what they were doing as well as colleagues from the Holy See.

“This sort of developed I think because my fellow female ambassadors felt much the same and so we actually ended up in lockdown setting up a women’s ambassador group and then we started doing thing. So just inviting people to speak to us who were campaigning on different things so: so we had a talk for example from a sister who has written a doctorate on sexual abuse by priests against nuns in Africa, we heard from an expert on women deacons.”

Despite her concerns about the visibility and role of women at the Vatican, the ambassador felt that she and her women colleagues were part of an era of change on the issue, pointing to a recent video by Pope Francis on the importance of women’s role in the Church sponsored by her group of women ambassadors. “There definitely a change in the Holy See in their approach to women,” said the ambassador. “There are more senior appointments now…Sister Natalie Becker is the deputy in charge of synods, there’s a deputy foreign minister who’s a woman…women are increasingly being appointed to positions of real responsibility in the Vatican.”

Another thing that surprised the new ambassador were the long memories of those in the Vatican when it came to diplomatic relations with the UK: “Because the Holy See is an organisation that takes a very long view, all the history that is there, is still there and is very present. In Rome it is really not unusual to find yourself talking about Henry VII, or Cardinal Pole or [Queen] Mary – that history is in people’s minds.”

In her view the canonisation of St John Henry Newman, as one of few post-reformation English saints who is not a martyr, represented an important moment in that troubled history. The British embassy made the most of it, putting on a sizeable event, with Prince Charles playing a role: “So the fact the Prince of Wales came and gave a great speech and wrote an article for the Vatican’s newspaper was really significant in our bilateral relationship.”

She went on to read out a quote from the Prince’s speech: “John Henry Newman could advocate without accusation, disagree without disrespect, and see differences as spaces of encounter rather than exclusion. He gave the Catholic Church renewed confidence as it re-established itself in a land in which had once been uprooted. The Catholic community in Britain today owes an incalculable debt to his tireless work, even as British society has cause for gratitude to that community for its immeasurably valuable contribution to our country’s life. As we mark the life of this great Briton, this great churchman, and as we can now say, this great saint who bridges the divisions between traditions it is surely right that we give thanks to the friendship that despite the parting has not merely endured but has strengthened.”