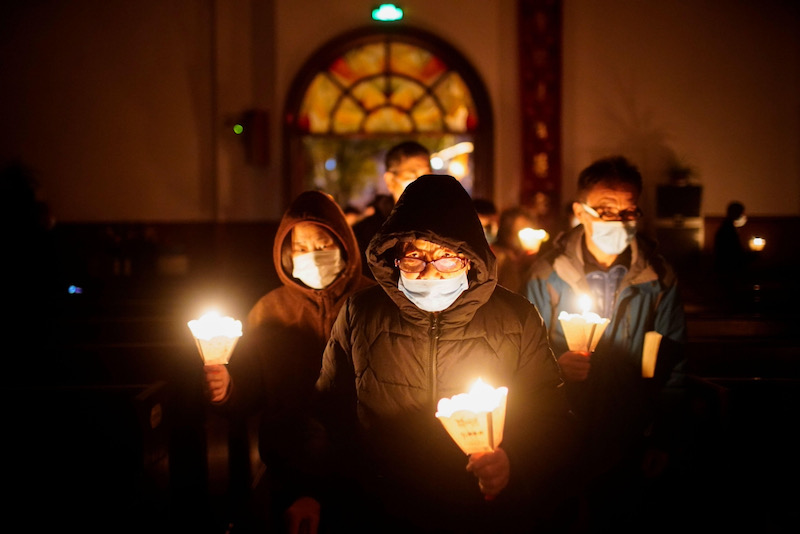 US bishops at war over denying Communion to Biden 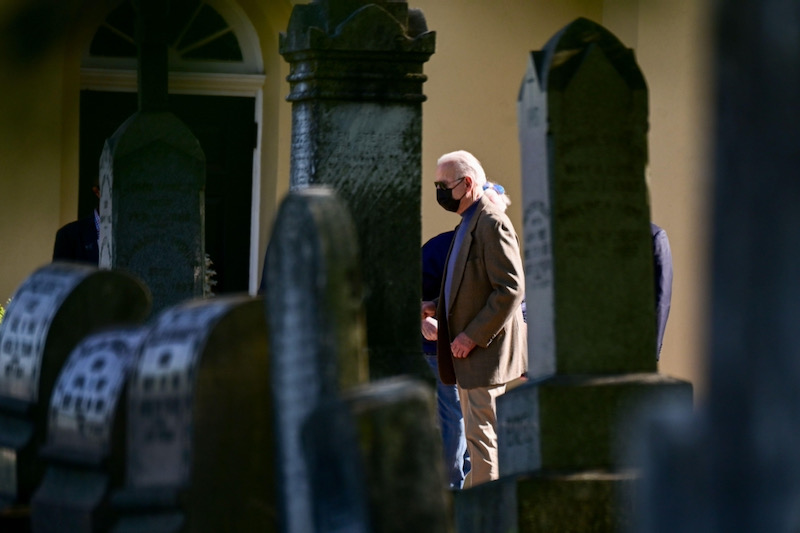 Many bishops have reservations about Joe Biden, a committed Mass attender and only the second Catholic to become President of the United States.
Erin Scott/Reuters

After receiving an unprecedented letter from 67 bishops appealing for a delay in a discussion during the bishops’ upcoming spring general assembly on whether to prepare a teaching document on the reception of Communion, the US Conference of Catholic Bishops' president explained in a memo the procedure followed in bringing the question to a vote during the June 16-18 virtual meeting.

The back-and-forth messages follow an increasingly public debate among the bishops about Catholic politicians who support keeping abortion legal and whether they should be denied access to the Eucharist.

In a May 22 memo to fellow bishops, Archbishop José Gomez of Los Angeles explained that the USCCB administrative committee approved a request from Bishop Kevin Rhoades of Fort Wayne-South Bend, Indiana, for the discussion on drafting a document to examine the “meaning of the Eucharist in the life of the church”.

The administrative committee includes conference officers and all of the committee chairmen. It set the spring assembly agenda during its meeting in March.

Bishop Rhoades chairs the bishops’ committee on doctrine, which would draft the document if approved by the full assembly.

Archbishop Gomez’s memo came in response to a May 13 letter, which was obtained by Catholic News Service, to him from 67 bishops who asked that any discussion on “eucharistic coherence” be removed from the assembly agenda.

The letter cites May 7 correspondence from Cardinal Luis Ladaria, prefect of the Congregation for the Doctrine of the Faith at the Vatican, to Archbishop Gomez.

The bishops wrote that “we respectfully urge that all conference-wide discussion and committee work on the topic of eucharistic worthiness and other issues raised by the Holy See be postponed until the full body of bishops is able to meet in person”.

Archbishop Gomez said USCCB rules require that the body of bishops first be asked whether to issue a document on a particular topic. Bishop Rhoades took such a step by asking the administrative committee to include time on the spring agenda to discuss such a question. The committee agreed.

The process, the memo explained, involves the creation of an “action item” for the bishops to consider.

“Importantly, the action item does not ask the body to approve a final statement, but only whether drafting of a text may begin,” the memo said.

It added that if the action is approved, the doctrine committee would begin its work, subject to the conference's “usual process of consultation, modification and amendment” when presented for consideration at a future general assembly.

“As you will note, the focus of this proposed teaching document is on how best to help people to understand the beauty and mystery of the Eucharist as the center of their Christian lives,” the archbishop wrote.

Archbishop Gomez's memo included a draft, dated May 14, of an outline of a possible document with the proposed title: “The Mystery of the Eucharist in the life of the Church: Why It Matters.”

Each part has three topics that would be addressed including, respectively, the real presence of the body and blood of Christ in Communion, unity, beauty and identity as the “fount and apex of the whole Christian life” and moral transformation, eucharistic consistency and missionary discipleship.

The letter from the bishops was sent on letterhead of the Archdiocese of Washington. The archdiocese did not respond to a CNS email seeking comment.

The bishops said the serious nature of “eucharistic worthiness” and other issues raised in Cardinal Ladaria's letter requires the bishops to “forge substantive unity”, something which they said is “impossible to address ... productively in the fractured and isolated setting of a distance meeting.”

They wrote: “The high standard of consensus among ourselves and of maintaining unity with the Holy See and the universal church as set forth by Cardinal Ladaria is far from being achieved in the present moment.

“Moreover, as the prefect's sound theological and pastoral advice opens a new path for moving forward, we should take this opportunity to reenvision the best collegial structure for achieving that,” the letter said.

Cardinal Ladaria in his letter urged the US bishops to proceed with caution in their discussions about formulating a national policy “to address the situation of Catholics in public office who support legislation allowing abortion, euthanasia or other moral evils”.

The cardinal also reiterated what he had said he had told several groups of US bishops during their 2019-2020 ad limina visits, namely that “the effective development of a policy in this area requires that dialogue occurs in two stages: first among the bishops themselves, and then between bishops and Catholic pro-choice politicians within their jurisdictions”.

Archbishop John Wester of Santa Fe, New Mexico, one of the 67 signatories of the letter to Archbishop Gomez, said the correspondence was not meant to be divisive, but was in fact “in keeping with Cardinal Ladaria's exhortation for an extended and serene dialogue”.

“The letter is basically a direct response to Cardinal Ladaria's intervention,” Wester told CNS May 26.

Archbishop Wester said the letter was “meant to create unity among the bishops” in advocating for a better time to have this discussion. The June meeting will be virtual, which means that 275 bishops will be in a giant Zoom meeting, he said.

The ability to talk both formally and informally with brother bishops is “very, very constrained on Zoom”, he noted. The November plenary session of the US bishops’ conference is likely to be in person, which Archbishop Wester thought would be more conducive for the kind of extended discussion envisioned by Cardinal Ladaria in his letter.

Meanwhile, two archbishops issued statements May 25 in support of keeping the discussion on a possible document focused on the Eucharist on the June general assembly agenda.

Archbishop Samuel Aquila of Denver and Archbishop Salvatore Cordileone of San Francisco called for work on a document on eucharistic coherence to continue and the discussion to take place during the bishops' June spring general assembly.

Archbishop Gomez has followed the correct procedures to facilitate “this critical discussion as a body of bishops”, Archbishop Aquila said.

Without citing who, Archbishop Aquila said “there have been some who have misrepresented” what Cardinal Ladaria's letter said, “but it was clear from it that the USCCB’s plan to discuss and debate this important issue is warranted and encouraged”.

In contrast, he continued, “ the publication of the letter calling for a halt to discussion at our June meeting on this vital issue risks creating an atmosphere of factionalism, rather than unity among the bishops”.

Archbishop Cordileone said he was “deeply grieved by the rising public acrimony among bishops and the adoption of behind-closed-doors manoeuvers to interfere with the accepted, normal agreed-upon procedures of the USCCB”.

He said: “Those who do not want to issue a document on eucharistic coherence should be open to debating the question objectively and fairly with their brother bishops, rather than attempting to derail the process.”

He said he was looking forward to “serene dialogue” as Cardinal Ladaria urged in his letter, during the upcoming June general assembly “so that we may discern the best way forward for the Church in the United States to witness to the grave moral responsibility of Catholic public officials to protect human life at all stages”.

Archbishop Cordileone issued a pastoral letter May 1 focusing on the unborn, Communion and Catholics in public life. It emphasised that “those who reject the teaching of the church on the sanctity of human life and those who do not seek to live in accordance with that teaching should not receive the Eucharist”.

President Joe Biden Catholic news The Catholic Church in the US