What's behind the Vatican challenge to ideologue bishops 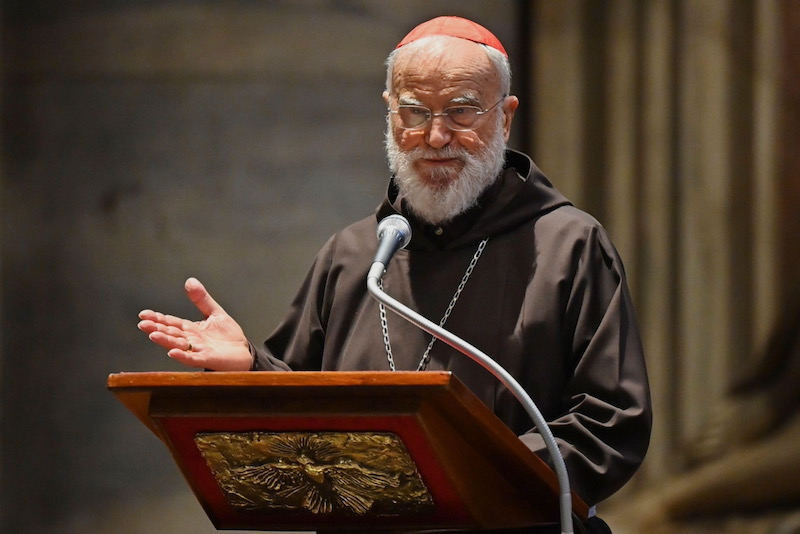 Maybe it's time the US bishops sat up and paid attenton to Cardinal Raniero Cantalamessa, pictured delivering the homily on Good Friday in St Peter's.
Andreas Solaro/Reuters

The warning to the bishops was issued from St Peter’s Basilica on Good Friday by an 86-year-old Capuchin friar. On this solemn day of penitence, Cardinal Raniero Cantalamessa, wearing the simple brown habit of a Franciscan rather than the robes of a Prince of the Church, called on pastors to make an examination of conscience over their role in fuelling church divisions.

His appeal was not picked up by those bishops in the United States who are determined to refuse Communion to President Joe Biden and other Catholic politicians over their support for legal abortion.

Contemporary Church divisions, Cantalamessa argued during his homily, are not about the fundamentals of the Christian faith but fuelled by “political opinions that grow into ideologies”. Bishops, he said, must ask themselves: are they leading their flock to Jesus’ position or their own?

After the Cantalamessa warning came the decisive Vatican intervention. Cardinal Luis Ladaria, prefect of the Holy See’s doctrine office, this week slammed the breaks on moves inside the US Bishops’ Conference to draw up a national policy on the worthiness of pro-choice politicians to receive Communion.

From reading the Ladaria letter, and speaking to people in Rome, the following conclusion can be drawn: any national plan to deny Communion to President Biden and other politicians has no support from senior Vatican officials. And we can assume that Pope Francis agrees.

That does not mean the Pope and the Holy See are opposed, in principle, to refusing Communion to politicians who pursue anti-life policies and which do not protect life in the womb. But the idea of an episcopal policy on the matter goes above and beyond the norms of Catholic law and practice. Speaking on background, one Church source said the stipulations in Canon Law over refusing an individual Communion are not designed to be punitive but restorative. They are, the source said, about “bringing a person back to a proper way of acting” and that “only a pastor can do that, not a [bishops’] conference. The whole question of a policy is unworkable.”

The matter of whether Biden should stop presenting himself for Communion, therefore, is between him and his bishop while any US bishops’ policy risks politicising the Eucharist, something that other US bishops such as Robert McElroy of San Diego, are concerned about. The pro-life cause is also not helped by a lack of consistency. It is worth remembering that church leaders seeking to bar the president from communion over his abortion policies were largely silent about the impact of a migrant policy pursued by President Trump’s administration which saw children separated from their families. Anti-life policies come in all shapes and sizes.

Refusing Communion to pro-choice Catholic politicians is not the only hotly-contested issue the Vatican has intervened in recently. It follows the Congregation for the Doctrine of the Faith’s (CDF) ruling against the church offering blessings to same-sex couples. Intriguingly, the Ladaria letter emerged on the day that some priests in Germany carried out blessings in defiance of Rome’s ruling.

Both of these contentious topics underline the delicate balancing act the Pope must perform in maintaining unity. It is all the more testing as Francis seeks to usher in a more synodal, decentralised model of the Church, one where local bishops have greater freedom to answer controversial questions arising in their territories.

It is worth noting the significant differences in Rome’s response to the same-sex blessings and Communion questions. When it came to blessings, the CDF answered “negative” in response to a question about blessings – a question that had been asked anonymously. The ruling was widely believed to be in response to the German synodal pathway which is discussing questions of sexuality and the possibility of blessing same-sex couples. But the CDF issued their document without consultation either within the Vatican or other bishops conferences. Although Francis assented to the ruling, it is understood he is not happy with how it was handled.

By contrast, the letter to the US bishops offered a theological framework for how to approach this question advising dialogue, maintaining unity among the episcopate and avoiding the impressing that abortion and euthanasia are the “only grave matters of Catholic moral and social teaching.” The Ladaria letter reads as though the Pope was involved in its drafting and suggest that in the future, the response to contentious topics will be focussed on how to reach a discerned judgment rather than a prescriptive “yes” or “no”.

The German synodal pathway has come in for a lot of criticism, particularly in the United States, for being a threat to Catholic unity. For the influential Catholic donor Tim Busch – who described the Trump presidency as a “time of light” – the Pope needs to act now to avoid a German “schism”. He has also been pushing for Biden to be refused Communion.

While the German synodal pathway is not without problems, and difficulties, the claim that it is fuelling schism is strongly disputed. Archbishop Mark Coleridge, president of the Australian Bishops’ Conference, has described the charge against the Germans as “alarmist and deeply unhelpful”.

Despite the Vatican ruling, some in the US Church may continue to argue that Biden should still be refused Communion. If they do, however, their claim that it is the Germans who are causing division will start to ring hollow.

In his Good Friday homily, Cardinal Cantalamessa, the Preacher of the Papal Household, said the threats posed by political polarisation are nothing new – they also existed in Jesus’s time with four different parties competing for influence. But, Cantalamessa argued, Jesus “energetically resisted attempts to be pulled towards one or the other”, and that the first Christians followed his examples.

“Fomenting division is the work par excellence of the one whose name is ‘diabolos’ that is, the divider, the enemy who sows weeds,” said Cantalamessa.

Will his warning now be heeded?