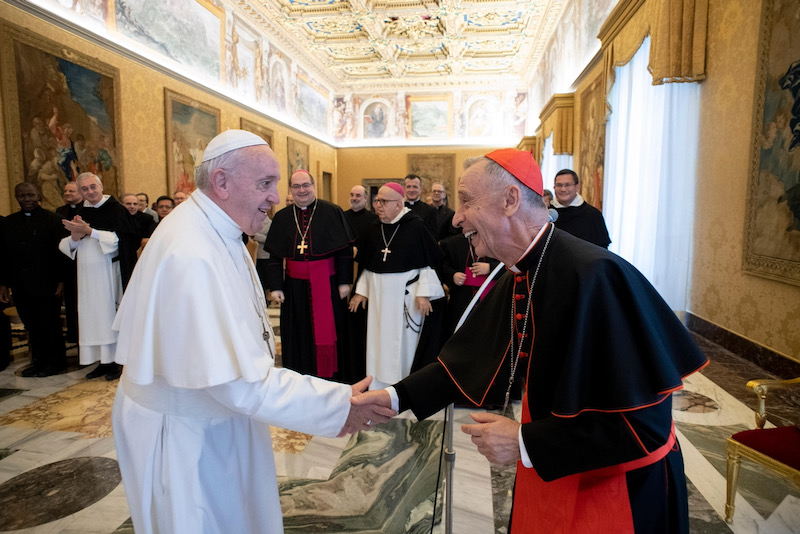 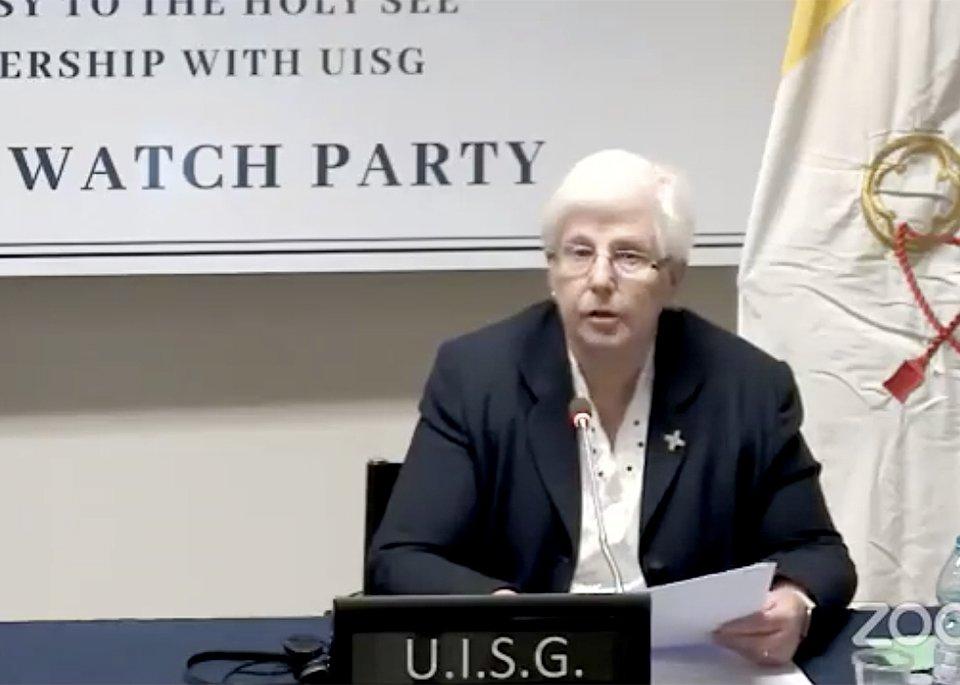 Sr Patricia Murray, secretary of the International Union of Superiors General, note that women are taking up significant roles.
CNS screen grab/Facebook, US Embassy to the Holy See

A synodal church is “fundamental” to Pope Francis’ vision for women in the Church, where women challenge clericalism without being co-opted by it, papal biographer Austen Ivereigh told a webinar on the role of women in church leadership, hosted by the Diocese of Limerick.

The webinar followed the publication on Sunday of a report on this theme as one of central recommendations to emerge from the 2016 Limerick Diocesan Synod.

Prepared by a specially appointed working group, the report concludes that there are difficulties and struggles for women, both lay and religious, particularly in a parish environment that revolves around the priest. It also suggests that a radical change of mindset is required to balance leadership within the Church and the entire Christian community.

It highlights the “need to honour the dignity of Christian women in ministry” and that while women have been working continuously within the Church, their experience is that much of what they do, is in the background and somewhat ‘invisible’.

But it also notes that there are many possibilities open to the Church within the existing provisions of canon law which need to be more widely understood and can facilitate change.

Rose O’Connor, chair of the women in leadership working group in Limerick, said there are “very significant challenges, but that there are also opportunities for women when it comes to leadership roles in the Church”.

She added: “While the issue of ordination of women is at the forefront of most people’s thoughts when it comes to inequalities in the Church, as a working group we concentrated on what is possible within the provisions of canon law; what we can impact here on the ground, what we can change. In doing so, we have identified some significant challenges and explored options for dealing with those.”

She said the report had raised two very important questions: whether women, men and children have the spaces and opportunities in the Church to exercise their gifts and calling in the service of the common good, and whether the official and de facto structures within which they operate, facilitate or frustrate the exercise of their ministry.

She highlighted the report’s work on the canon law perspectives on these issues. “We learned that canon law does not distinguish between women and men. The principal distinction is between ordained and lay. So, if an office or function is available to a lay person, it is equally available to both women and men.”

The report recommends that any ministry or leadership role taken on by a lay person be formally, officially and publicly commissioned by the bishop in the presence of Christian community.

In his presentation on Pope Francis’ perspective on women in church leadership Austen Ivereigh warned against a “grievance culture” and referred to Pope Francis’ post synodal exhortation, Querida Amazonia, in which the Pope highlighted the distinctively lay ecclesial culture of the Amazon, where most Catholic communities have no priest and are run by women.

He said Francis had indicated that it was vital for those women to have recognition and be commissioned by their bishops.

“He often puts women in positions where they can, not just exercise governance, but also challenge governance.”

Doors have opened under Francis and there is a new atmosphere in which women are listened to much more and their ideas are followed through on. “Just look at the numbers of women who have been brought in at all sorts of levels,” the writer said.

“I would say Francis is dismantling what you might call the imperialist or clericalist model of governance, to create space for new roles and ministries in which leadership can be exercised independently of priesthood.”

Another speaker at the webinar was Sr Patricia Murray, who was appointed by Pope Francis as a consultor to the Pontifical Council for Culture and is executive secretary of International Union of Superiors General, an organisation of over 1,900 leaders of women's religious congregations worldwide, who are in turn are responsible for about 700,000 Sisters.

She noted that women, lay and religious, are taking up significant roles at many different levels within the Church. However, the Rome-based Loreto Sister also highlighted how “the visibility and voice of women religious has in general been missing from public discourse”.

Noting that lack of formal representation of women religious at the various synods of bishops, Sr Murray revealed that the male counterpart of the UISG, the Union of Superiors General, automatically secured 10 places. Following lobbying by the UISG, women religious received three places at the synod on the family, three at the synod on youth, and 20 Sisters were present that the Synod on Amazonia.

The organisation had also highlighted the lack of women in decision-making in various Vatican dicasteries, councils and commissions. “We pointed out to Pope Francis that in the dicastery which dealt mainly with consecrated life, where 80 per cent of religious are women, there were no women on that particular Council.”

She recalled Pope Francis speaking on many occasions about the necessity of broadening the opportunities for a stronger presence of women within the Church. According to Sr Murray, “change has begun to happen” and “through baptism, we all, as Christians, share in the mission and ministry of the Church”.

She added, “I believe that as we set out on our synodal journey, we will see the presence and leadership of women flourishing.”

Opening the webinar, Bishop Brendan Leahy of Limerick described the ‘Role of Women in Church Leadership’ report as “timely”.

“Our Limerick diocesan synod heard a call for this. And the diocese has been invited to imagine new models of leadership that involve greater and formal recognition of women’s contributions.” The Bishop of Limerick suggested that in the past, “Maybe too often we have only focused on one or a few ministries. Whereas we need to recognise a bigger vision of Church.”

He added, “Women and men know that something more is needed today in terms of women in Church leadership. The clock is ticking and we need to move on this.”