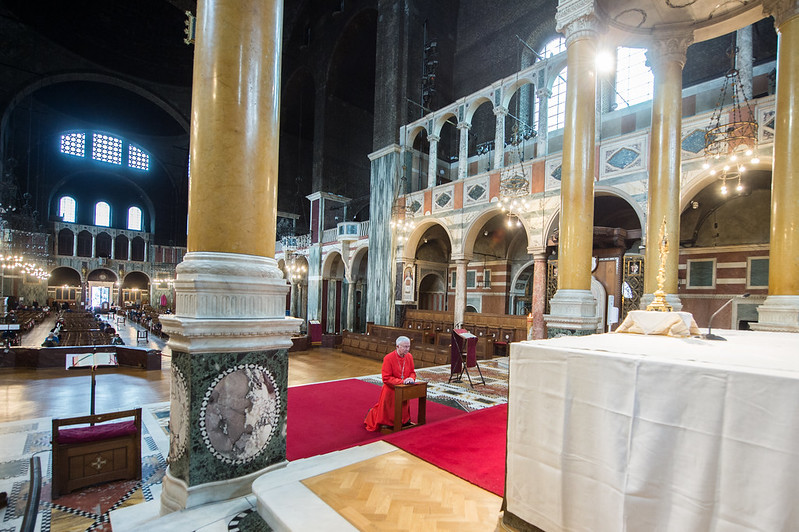 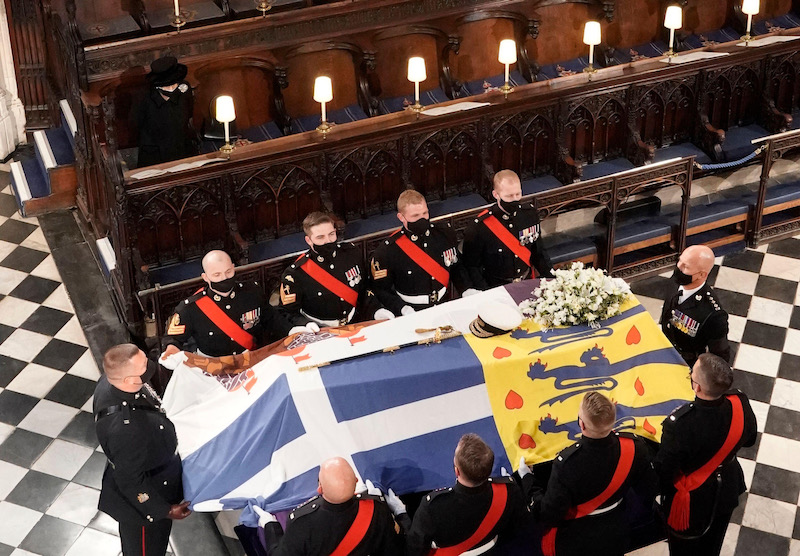 The Queen watches as the coffin of the Duke of Edinburgh is placed St George's Chapel, Windsor Castle, Berkshire during his funeral service.
PA/Alamy

Bishops across the UK celebrated Requiem Masses for Prince Philip last week, including in the Dioceses of Westminster and East Anglia. Bishop of Shrewsbury Mark Davies said Catholics owed “a duty of prayer” to Prince Philip, who died on Friday April 9 at the age of 99 and whose funeral took place last Saturday. The service was led by the Dean of Windsor, and the Archbishop of Canterbury pronounced the blessing. Readings included Ecclesiasticus and John 11.

Fr John Kearns, provincial of St Joseph’s Passionist Province, has died. A dedicated and inspiring friend, advocate and companion to the marginalised and poorest, he was remembered by Paschal Somers, a Passionist development worker, as “a beautiful human being”.

Congregations and orders across the UK are celebrating Religious life with an online festival, Living Joyfully, for young adults and discerners (18-40) today (24 April), the day before Vocations Sunday.

The cap on public worship in churches in Scotland is to be lifted from 26 April, when individual parishes will be allowed to determine a maximum size of congregation in keeping with available space and observing ongoing social distancing rules.

The funeral of Revd Canon Michael Bourdeaux, a Templeton Prize winner who advocated for persecuted Christians in the former Soviet Union, and who died during Holy Week, took place in Iffley, Oxfordshire, last week.

The Association of Catholics in Ireland (ACI) welcomed the Irish bishops’ announcement last week of a synodal pathway for the Irish Church but warned that a parish pastoral council is a minimum requirement to facilitate lay involvement in communities. Fewer than one-fifth of Irish parishes have effective working parish pastoral councils. The ACI said lay members of the Church, “long ignored, must feel there is a genuine desire for their involvement and contribution. If there are no structures at local level for their voice to be heard, then it [the synod] will fail.”

Caritas Westminster has reported a 400-per-cent rise in demand for church food banks over the past year. Westminster and the Archdiocese of Cardiff operate supermarket voucher schemes that support people experiencing food poverty. More than 14,000 people across the two dioceses have been supported through the schemes, which give families the option of shopping rather than receiving food bank parcels.

The Taoiseach Micheál Martin has met a delegation of church leaders, including the Catholic Primate of All Ireland, to discuss their grave concern at recent incidents of violence on the streets of Northern Ireland. In a statement, they recognised the importance of dialogue, engagement and respect for all communities and traditions in fostering reconciliation through the framework of the Good Friday Agreement. They called for calm, measured and positive leadership to be exercised at every level – political, civic and community – for all the people of Northern Ireland.

Cafod and Christian Aid are among 12 agencies condemning Prime Minister Boris Johnson’s criticism of an International Criminal Court investigation into alleged serious crimes committed in the West Bank and Gaza. He called the investigation “a partial and prejudicial attack”, but the agencies said the investigation is bringing victims, survivors and their families one step closer to justice, while “political interference” by states such as the UK risks pushing that out of reach.

The creation of the first embryo with human and non-human primate cells by a US-Chinese team of scientists has been described as “deeply unethical” by the head of the UK’s leading Catholic bioethics institute. David Albert Jones, director of the Oxford-based Anscombe Bioethics Centre, said that the experiments “cross a moral boundary because they mix human and non-human elements at a very early stage of development in a way that raises serious questions about moral status”.