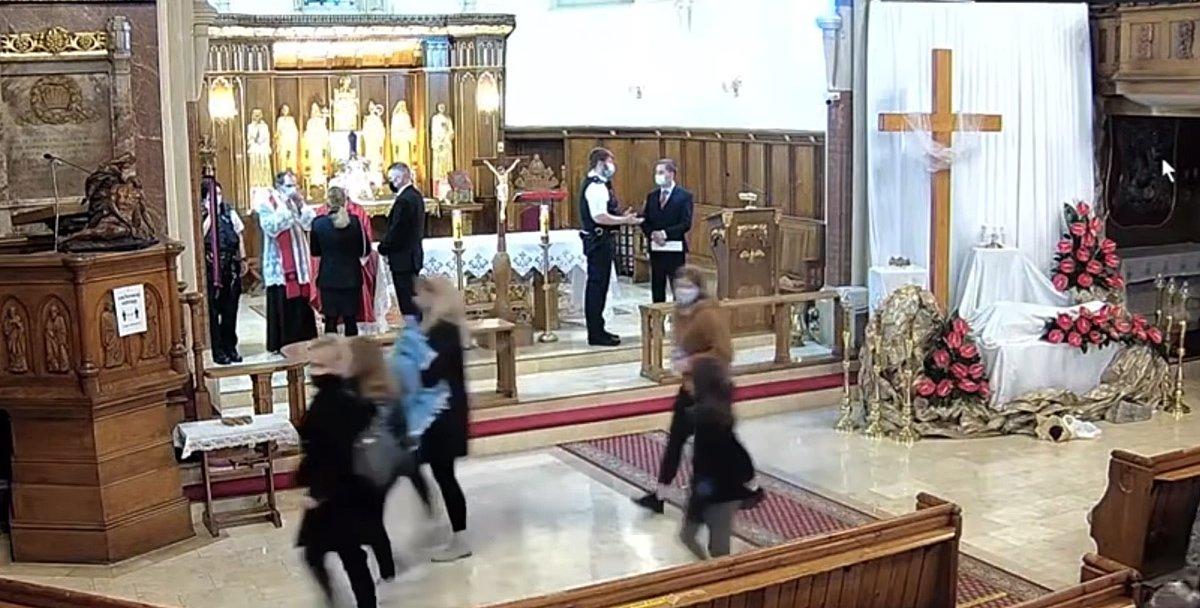 Police in London stand on the altar at Christ the King Polish church and halt a Good Friday service.
CNS screenshot/YouTube

The head of the Polish Church's mission in England and Wales has said police abused their powers when they raided a parish church in south London and forcibly halted a Good Friday liturgy.
“The police officer told the priest all London churches were closed – this was not true”, said Mgr Stefan Wylezek, rector of the London-based Polish Catholic Mission.
“After two previous occasion when police arrived at our churches, we received apologies, with an admission that officers had not behaved properly. Police can intervene before or after, but not when a service is taking place. Nor are they allowed to enter churches and interrupt people in their prayers.”
The Polish rector spoke in the wake of the Good Friday incident, during which two uniformed police entered the sanctuary at Balham's Christ the King church during the Veneration of the Cross and ordered the congregation to disperse immediately or face fines and arrest.
Meanwhile, the parish’s assistant priest told The Tablet on Monday police had changed their story after the raid, which he said had terrified children serving at the liturgy and left parishioners “distressed and in tears”. He urged police to admit formally that they had made a mistake in taking the action they did.
“Before entering the church, they said we were breaking the law since there was currently a lockdown and we had no right to hold religious gatherings”, said Fr Aleksander Dasik. “But the subsequent police statement clearly realised the officers had acted erroneously and unprofessionally, and talked instead about a lack of masks and social distancing. They clearly didn't know the legal situation”.
Poland's Catholic Church has around 2000 clergy working in missions or pastoral networks in 25 countries, catering for around 15 million ethnic Poles living outside their homeland. The London-based mission, which celebrated its 125th anniversary in 2019, has 270 parishes and pastoral centres in England and Wales, served by over 100 Polish priests, with separate missions operating in Scotland and Ireland.
The Metropolitan Police said in a statement that the Good Friday action had been taken because “some people were not wearing masks and those present were clearly not socially distanced” out of concern “about the risk of transmission of the Covid-19 virus as a result of large indoor gatherings”.
However, a weekend website statement by the Christ the King parish said it had carefully complied with “all sanitary rules” under the government's 26 March guidelines for Easter worship, and had requested a police explanation for the “profanation”.
“We believe the police brutally overstepped their competence, issuing this order without a proper reason when all government demands were being observed”, the parish said. “We conclude that the municipal police were badly informed about current rules on places of worship”.
In a separate Facebook statement, the Archdiocese of Southwark said Archbishop John Wilson had made a pastoral visit to the Christ the King parish on Saturday, and reiterated that public worship was currently permitted subject to Covid hygiene procedures and in line with Bishops' Conference guidance.
In his Tablet interview, Fr Dasik said Catholics had been “amazed and appalled” by the police action, adding that the 130 people attending the ticketed liturgy had all been checked and positioned on arrival to comply with sanitary requirements.
“The police did nothing to ascertain how many families were seated together, or whether some people were not wearing masks for medical reasons – as was clearly their duty”, the priest said.
“Nor did they explain which rules or laws were being violated. Although we asked to be allowed just ten more minutes to shorten the liturgy and dispense Holy Communion, they refused. This wasn't a piece of fun, but an act of worship, and we're deeply hurt that no respect was shown for people's religious feelings”.
The Polish Embassy said it was in touch with the Polish Catholic Mission and gathering information about the incident at the Balham parish, where Easter Triduum Masses and liturgies later continued.
Meanwhile, Mgr Wylezek said police had promised not to repeat “mistaken conduct” after previous interventions at Polish churches in Slough and Wolverhampton, and had also acknowledged that officers showed a “lack of training”.
In his Tablet interview, Fr Dasik said he believed police chiefs should ensure their officers were “correctly informed about current regulations”, adding that he had no information to support social media comments that the incident had been provoked by individuals or groups hostile to the Polish Church’s current stance on social and moral issues.
“In today's climate, when people don’t like what the Church says, such situations unfortunately occur – but our own parish functions peacefully and we always seek good relations with those around us,” the priest said.
“We'd like the police to be aware that we're taking current conditions seriously and they don't have to watch us. We'd also be pleased if they now issue a letter which can be read during Mass and put on our website, accepting this was a mistake by people acting out of hand – and that Christian places of worship will be respected and people allowed to feel safe inside them.”
Back to articles
Back to articles