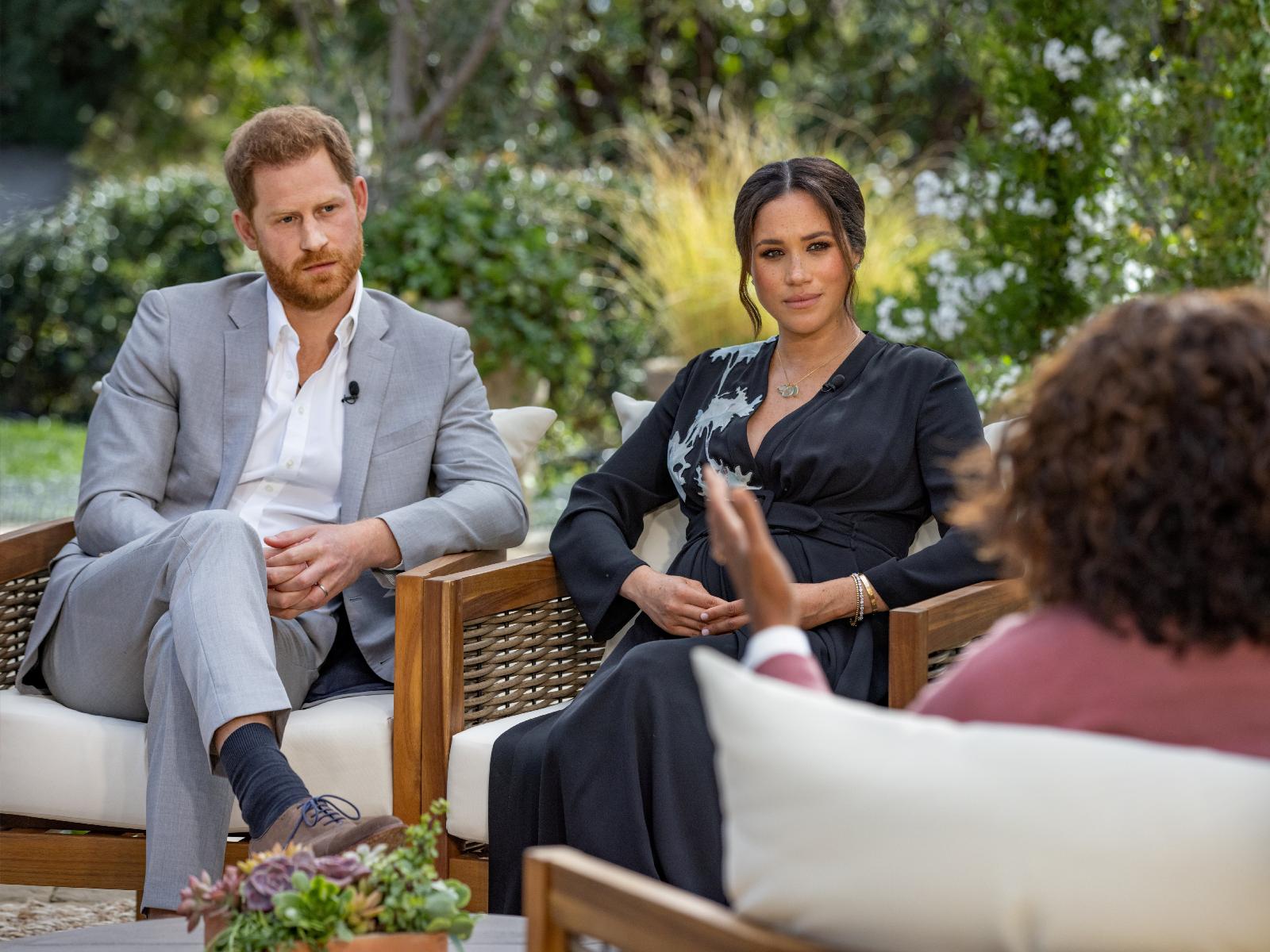 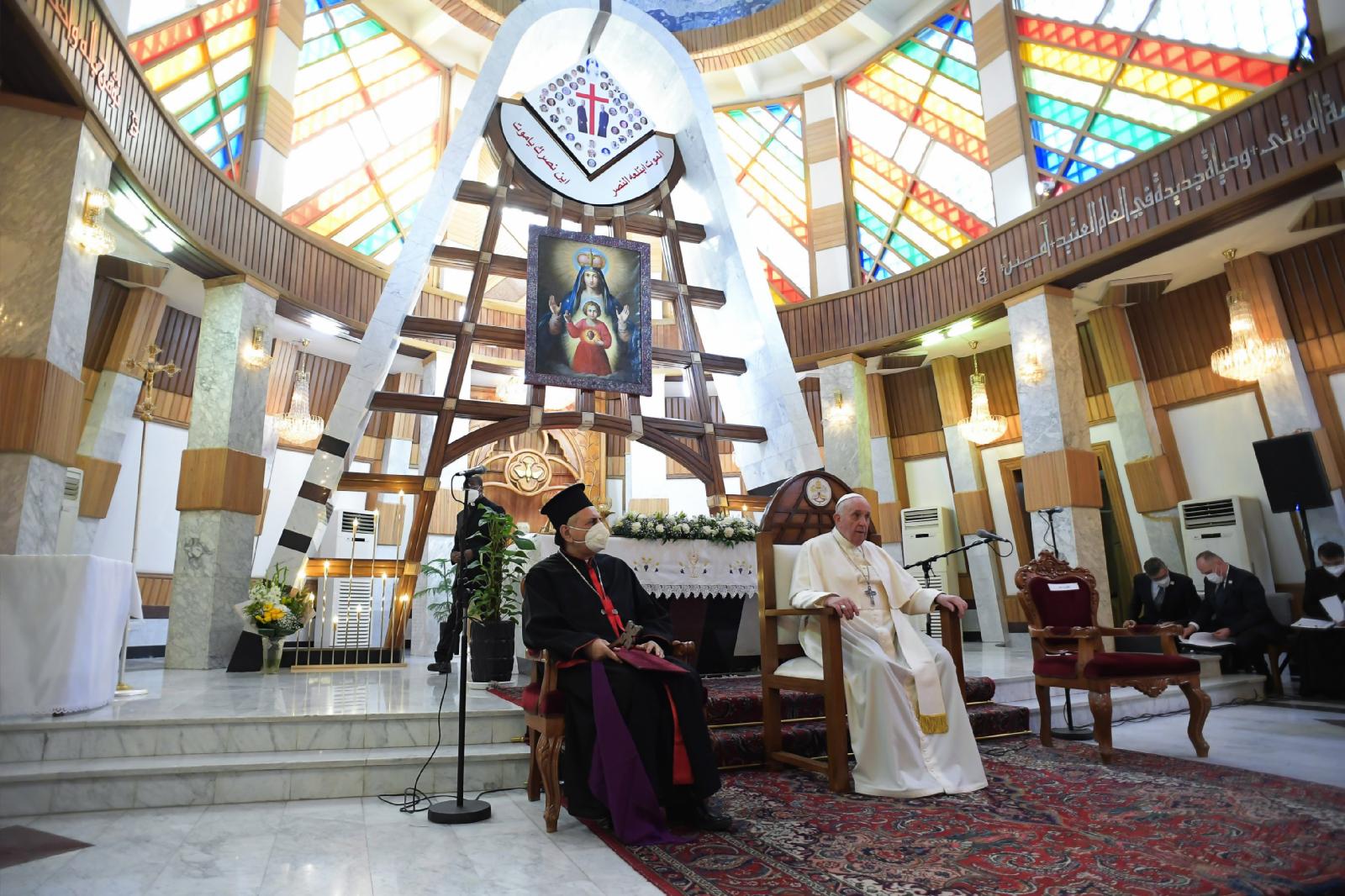 Pope Francis next to Syriac Catholic Patriarch Ignace Joseph III Younan during a meeting at the Cathedral of Our Lady of Deliverance in Baghdad.
CNS photo/Vatican Media

The Vatican has appointed the former commander general of Italy’s financial police force as president of the foundation overseeing Rome’s scandal-ridden Istituto Dermopatico dell’Immacolata, (IDI). Saverio Capolupo, 70, served from 2012 to 2016 as commander general of the Guardia di Finanza, a militarised police force responsible for dealing with financial crime and smuggling. He is now a member of the Council of State, which ensures the legality of Italy’s public administration. The Vatican named him president of the board of directors of the Luigi Maria Monti Foundation, which owns and manages the IDI. The IDI has been plagued by financial problems and embezzlement for a decade.

The first new Dead Sea Scrolls discovery in 60 years has been announced by the Israel Antiquities Authority. Dozens of fragments bearing biblical text have been found by archaeologists working in the Judaean Desert. The fragments were recovered from a cave where Jewish rebels against the Roman Empire hid around 1,900 years ago. They appear to contain the earliest copy of Zechariah 8:16–17 and one of the earliest copies of Nahum 1: 5–6.

The US Supreme Court has heard oral arguments in a case that could erode the right to organise for farmworkers, many of them migrants. The case concerns a long-standing government regulation that allows union organisers to approach workers during non- work hours on land owned by the company.

Bishop Robert McElroy, chair of the California bishops’ conference, which has signed on to an amicus curiae brief supporting the union, said an adverse ruling “would be another step in constricting the ability of workers to form associations, to unionise and to effectively bargain”.

Fr Kevin O’Brien SJ has stepped down temporarily as president of Santa Clara University pending the results of an investigation into charges of inappropriate conduct. O’Brien gained national prominence in January when he presided at a Mass on inauguration day attended by US President Joe Biden and many congressional leaders. The complaint alleges that O’Brien “exhibited behaviours in adult settings, consisting primarily of conversations, which may be inconsistent with established Jesuit protocols and boundaries”.

Catholic leaders joined other religious and civic leaders in the US in denouncing the rise in anti-Asian violence after eight people, six of them Asian women, were killed in a shooting rampage in Atlanta last week. Atlanta Archbishop Gregory Hartmayer said: “We don’t know the circumstances of this case but we do know members of the Asian community have found themselves the object of hateful speech and actions in the past year.” Chicago Cardinal Blase Cupich said: “It is incumbent on all of us to resist language, culture and acts that denigrate Asian Americans and all people of colour because they have deadly consequences.”

Salesians of Don Bosco in the town of Adwa in Tigray have reported that “rich and poor stand at our door every day and ask for something to eat in order to survive”. Since November, conflict in Tigray between the Ethiopian armed forces and militias of the Tigray People's Liberation Front has displaced over a million people.

Brazil’s economic crisis, intensified by the pandemic, has increased the number of homeless and the country’s Catholic bishops are helping to strengthen the legal case for thousands of families at risk of eviction from their homes. Brazil’s National Justice Council has recommended caution to all judges in the country when they analyse lawsuits that may result in the removal of squatters and rural settlements during the pandemic.

Some 18,000 people have been evacuated after severe floods struck New South Wales in Australia. Days of torrential downpours have caused rivers and dams to overflow around Sydney, the state capital, and in south-east Queensland. The military is helping with search and rescue, and Catholic and Anglican volunteers are joining the relief effort.

Sr Jean Dolores Schmidt, the 101-year old nun who serves as the chaplain to the Loyola University, Chicago basketball team, was cleared to travel to Indianapolis for the national tournament. Due to the pandemic, this year’s tournament is being played without fans, but an exception was made for Sr Jean, who has been leading the team with a virtual prayer before each game this season.

The Jesuit Conference of Canada and the United States has pledged $100 million (£72.1m) to the descendants of people the order once enslaved. It will go towards a $1 billion target; funds will be used to educate on the legacy of slavery and to address racism. “This is an opportunity for Jesuits to begin a very serious process of truth and reconciliation,” said Fr Timothy P Kesicki, president of the Jesuit Conference of Canada and the US.

An Australian oblate reported there are now more homeless in Hong Kong than in the past three decades. Fr John Wotherspoon, 74, a native of Brisbane who has been in Hong Kong for 36 years, said: “With the city government unwilling to provide shelter for the growing number of homeless people, a crisis is in the making.”