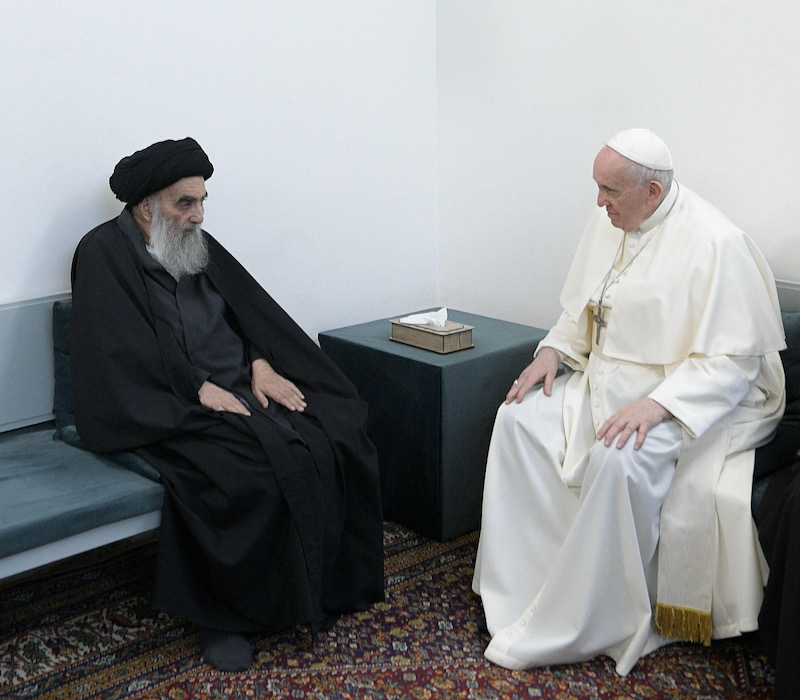 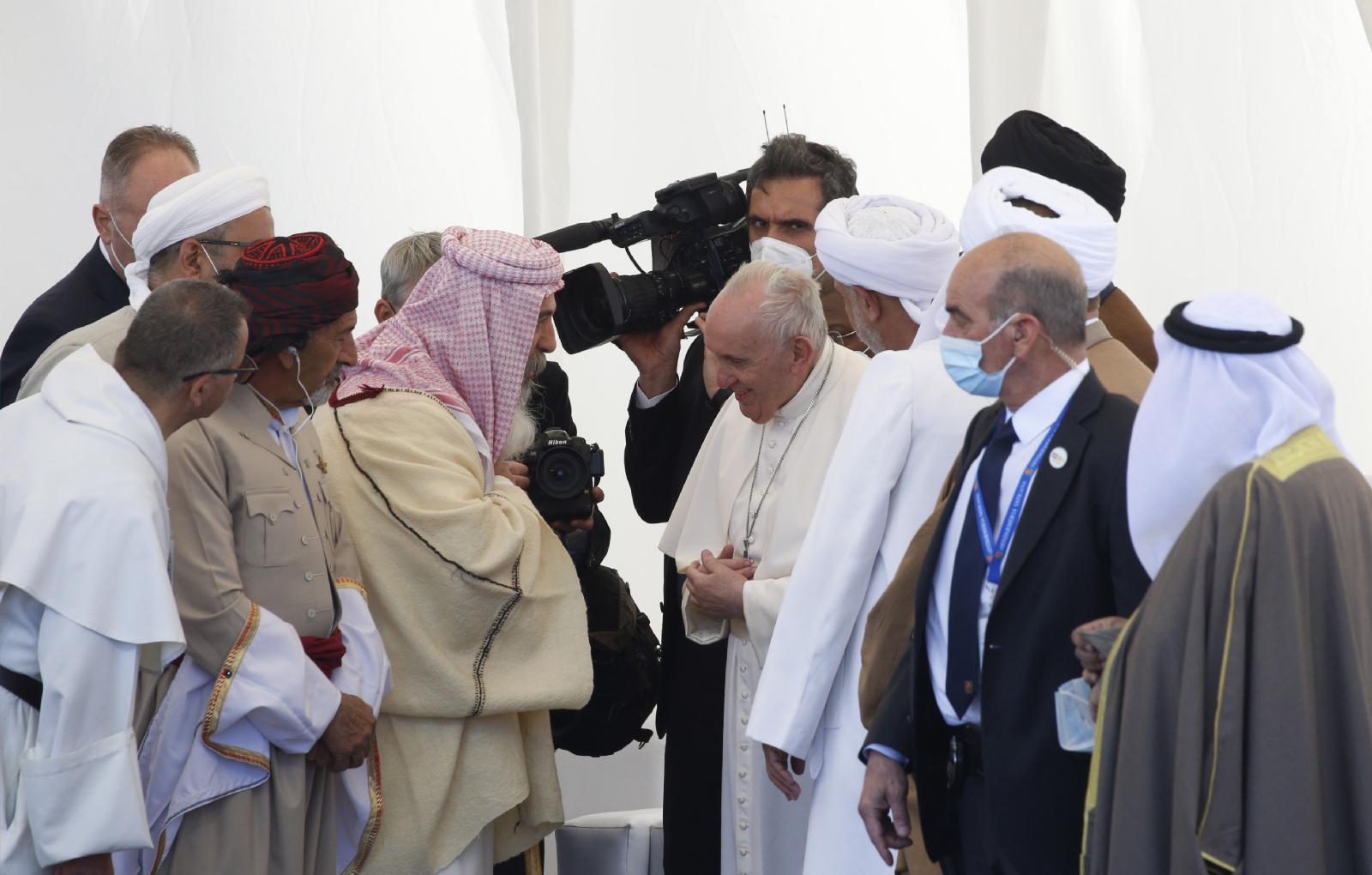 Pope Francis talks with religious leaders during an interreligious meeting on the plain of Ur near Nasiriyah, Iraq.
CNS photo/Paul Haring

Pope Francis has hosted a multi-faith prayer service in Abraham’s birthplace, the ruins of the city of Ur.

The prayer service brought together representatives of Iraq’s many religious traditions, including Christians, Sunni and Shia Muslims, Zoroastrians, Mandeans and Yazidis. Prayers and readings from across many of Iraq’s faith were read, and a variety of Iraqis from religious leaders to students spoke movingly about the significance of religious tolerance and fraternity. The service was held by the ruins of the city of Ur, believed to be the birthplace of Abraham, a figure who unites most of the faiths of Iraq.

The event began with a reading from the book of Genesis, relating how Abraham was called out of the land of Ur by God, followed by a reading from the Koran. Two young Iraqi students, called Daoud and Salim one a Muslim, one a Christian, described how they had grown up together and started a business to fund their studies. Salim, a Muslim, said “although Daoud and I are not of the same religion, our story shows we can work together and we can be friends, we would like many other Iraqi people to have the same experience, we don’t want war and violence and hatred”.

Local professor Ali Zaheer Tajir spoke of how he had helped organise pilgrimages to “the land of our father Abraham” with the help of the Christian community of the region, and of Muslims praying and Christians holding mass on the same site.

A member of the Mandean community, Rafah Husein Baher, an Iraqi Sabean Mandaean, spoke of how her family, including her own children, were forced to flee Iraq: “All Iraqis peacefully coexist, between us there are familiarity and common stories, together we subsist through the war’s ruins on the same soil. Our blood was mixed, together we tasted the bitterness of the embargo, we have the same identity.

“Injustice afflicted all Iraqis, didn’t exclude anyone: innocent bloodshed from all Iraqis. Terrorism violated our dignity with impudence. Many Countries, without conscience classified our passports as valueless, watching our wounds with indifference. Your Holiness’ visit to Iraq means that Mesopotamia is still respected and valued.”

Pope Francis addressed the assembled representatives of Iraq’s faiths with a powerful call to resist religious violence: “Hostility, extremism and violence are not born of a religious heart: they are betrayals of religion. We believers cannot be silent when terrorism abuses religion; indeed, we are called unambiguously to dispel all misunderstandings. Let us not allow the light of heaven to be overshadowed by the clouds of hatred.

“Dark clouds of terrorism, war and violence have gathered over this country. All its ethnic and religious communities have suffered. In particular, I would like to mention the Yazidi community, which has mourned the deaths of many men and witnessed thousands of women, girls and children kidnapped, sold as slaves, subjected to physical violence and forced conversions. Today, let us pray for those who have endured these sufferings, for those who are still dispersed and abducted, that they may soon return home.

“And let us pray that freedom of conscience and freedom of religion will everywhere be recognised and respected; these are fundamental rights, because they make us free to contemplate the heaven for which we were created.”