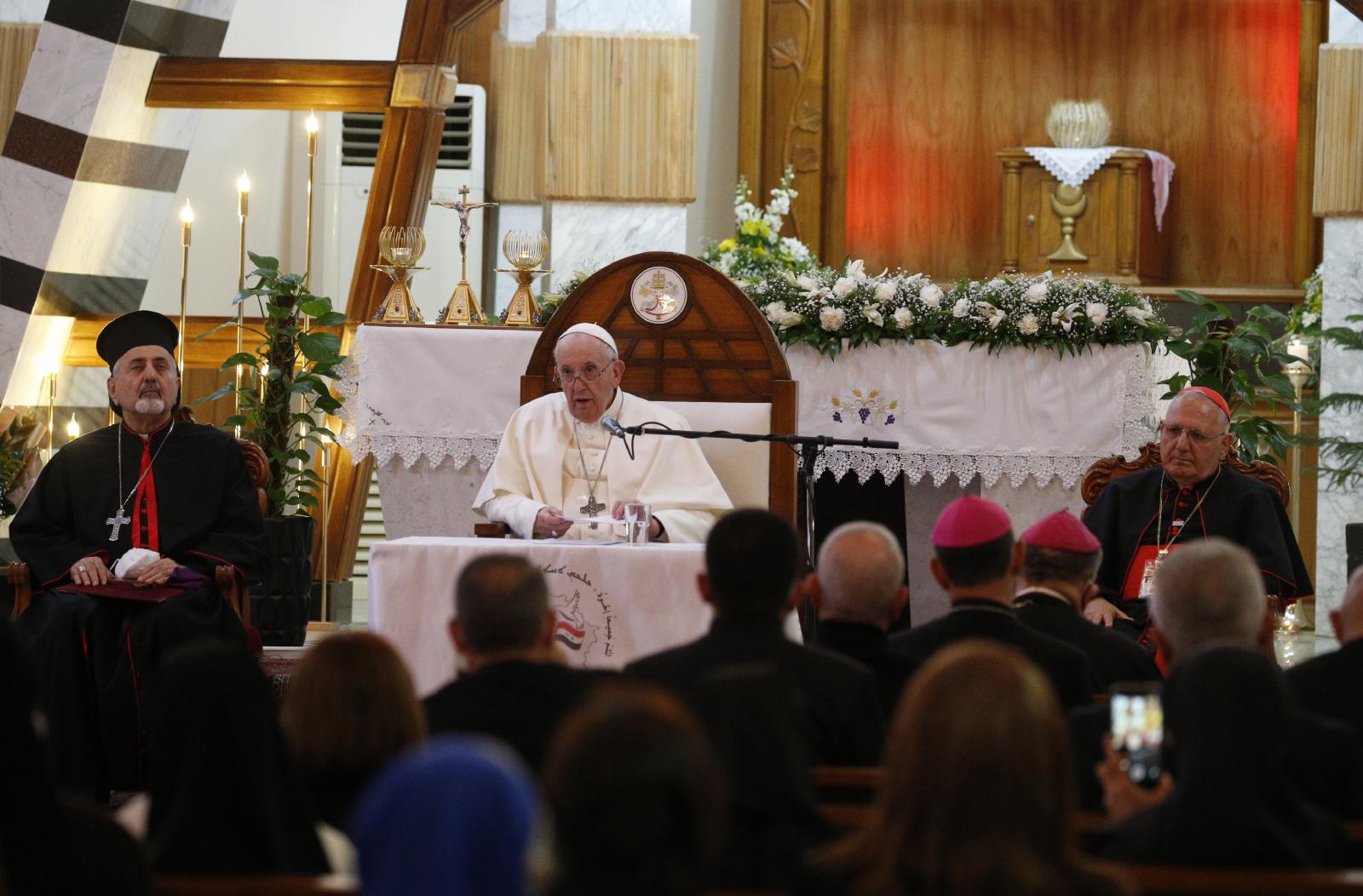 The Pope in Iraq, armed with a message of peace 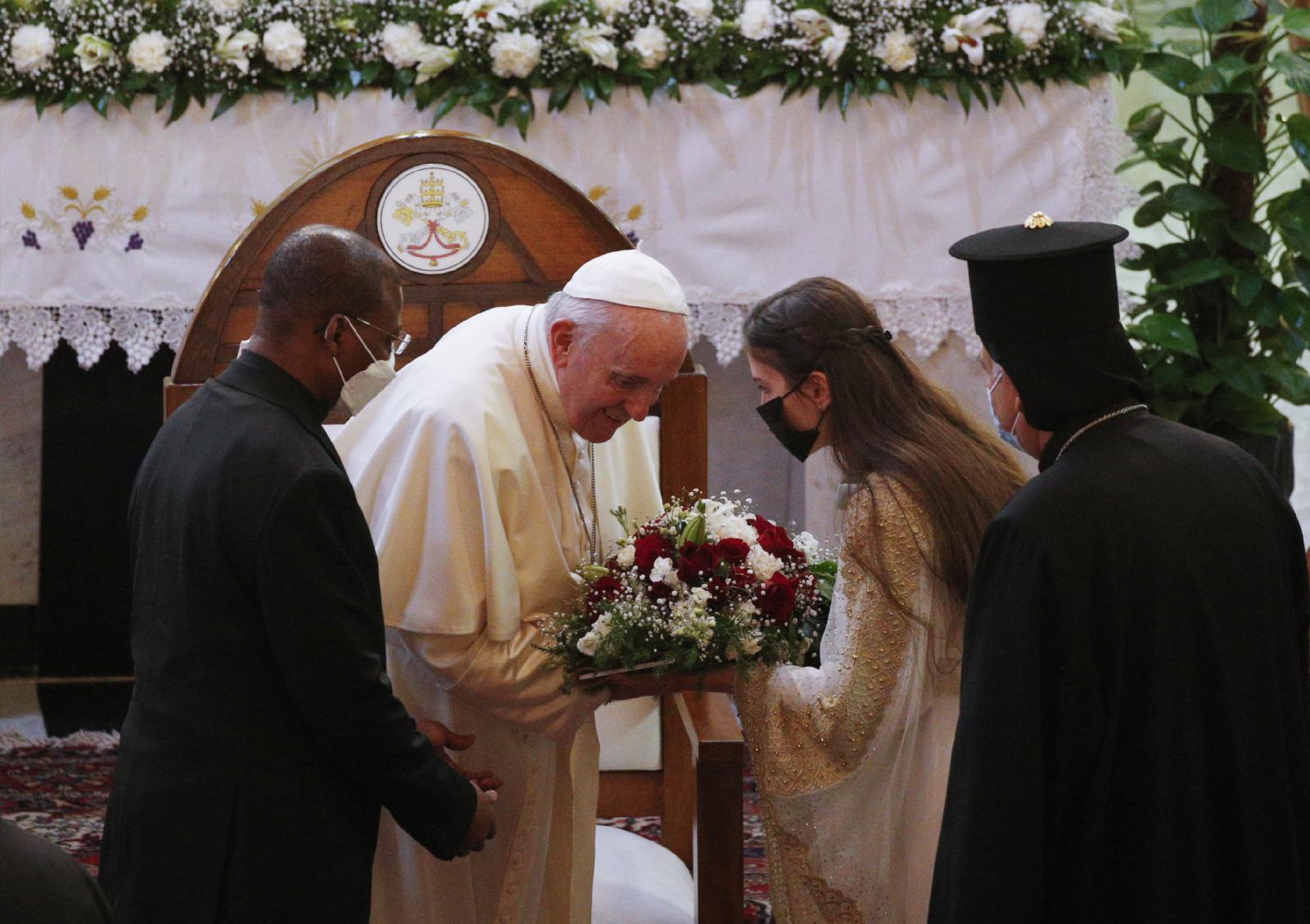 Pope Francis accepts flowers during a meeting with bishops, priests, religious men and women, seminarians and catechists in the Syriac Catholic Cathedral of Our Lady of Deliverance in Baghdad.
CNS photo/Paul Haring

Since the 2003 war, Iraq has been plagued by sectarian violence, much of it motivated by religiously-inspired extremism. It has targeted Christians, Yazidis and all minorities and has forced thousands of them out of their homeland. Over the last twenty years, the story of Iraq suggests that religion has been part of the problem of its post-invasion story.

During the first day of his trip, Pope Francis sought to turn the tables on that narrative by stressing that belief in God can never justify violence. Religion, he said on more than one occasion, must serve peace and contribute to unity.

“I come as a pilgrim of peace in the name of Christ, the Prince of Peace,” the Pope told Iraq’s leaders in the presidential palace. “I come as a penitent, asking forgiveness of heaven and my brothers and sisters for so much destruction and cruelty.”

These words go to the heart of this papal visit. Francis is not going to Iraq to plead or lobby for a particular religious group but comes as a witness to the Christian message of peace and reconciliation. He is a “penitent” who has embarked on a Lenten journey of healing. The Pope asking for forgiveness can be seen as a bold “turning the other cheek” to the violence perpetrated against so many Christians. It is also a spiritual act of taking onto his own shoulders the wrongs that have been carried out in Iraq.

Let's not forget that the allied-led Iraq invasion was strongly opposed by the Holy See and St John Paul II, who did everything in his power to avoid the conflict. Now, the first Pope to set foot in Iraq, wants the Church to play its part in the rebuilding of the nation.

Speaking in the presidential palace, Francis stressed that religion not only condemns violence it inspires believers to play an active role in supporting a multi-ethnic, diverse country.

“May the clash of arms be silenced! May their spread be curbed, here and everywhere!” he said. “May partisan interests cease, those outside interests uninterested in the local population. May the voice of builders and peacemakers find a hearing!”

Referencing the Second Vatican Council, which transformed the Church’s relationships with other religions, the Pope called for state authorities to “grant all religious communities recognition, respect, rights and protection,” and that no one should be second class citizens. It means the Church supports a “healthy pluralism” that helps a country prosper.

The Pope backed up his words to the country's leaders with actions by then going to the Syriac Catholic Cathedral in Baghdad. It was here, in 2010, that suicide bombers inspired by Islamic State killed 48 people, including two young priests. For Francis, such an attack must not spark vengeance, hateful attitudes or bitterness. Instead, he told church leaders, the memory of those killed should “inspire us to renew our own trust in the power of the cross, and it’s saving message of forgiveness, reconciliation and rebirth.” Once again, he was urging Christians to turn the other cheek.

Francis' call for the Iraqi state to incorporate different groups was also mirrored in his appeal for the different Christians in Iraq to find unity within diversity. The Pope wants the Church to be the first witness of fraternity.

Iraq is made up of a variety of churches, which the Pope today likened to a “single, beautiful carpet” where the different coloured threads display “not only our fraternity but points also to its source.” He added: “for God himself is the artist who imagined this carpet.”

At the end of his first day in the land of Abraham, the Pope stood, in the Baghdad cathedral next to Iraq’s Cardinal Louis Sako, hands outstretched as the Our Father was said in Arabic. “Forgive us our trespasses, as we forgive those who trespass against us.” The words had added poignancy today as the Bishop of Rome prayed them on a site where the blood of martyrs has been spilt. But as the history of Christianity teaches, it is the blood of the martyrs which is the seed of the Church.

Here was a reminder that the Pope is not a world leader who comes to a country backed by any military or economic power. He travels to Iraq armed simply with a message of peace. Judging by the joy of ordinary Iraqis on the streets of Baghdad, it is a message that just might be getting a hearing.