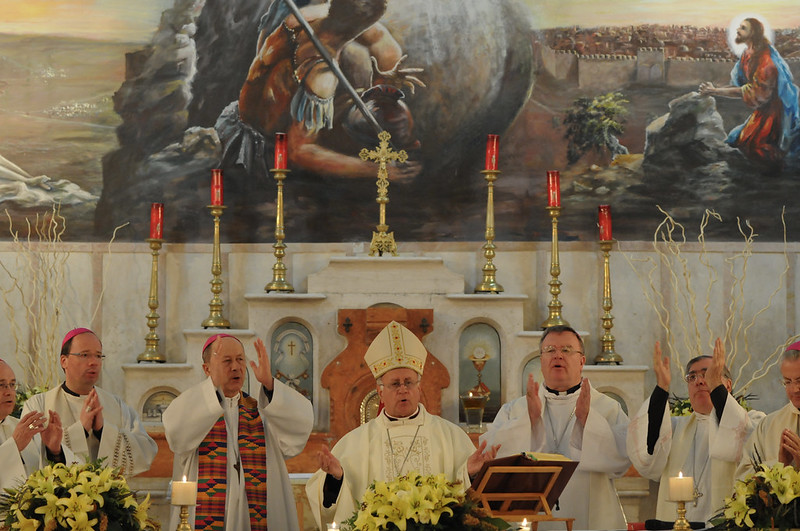 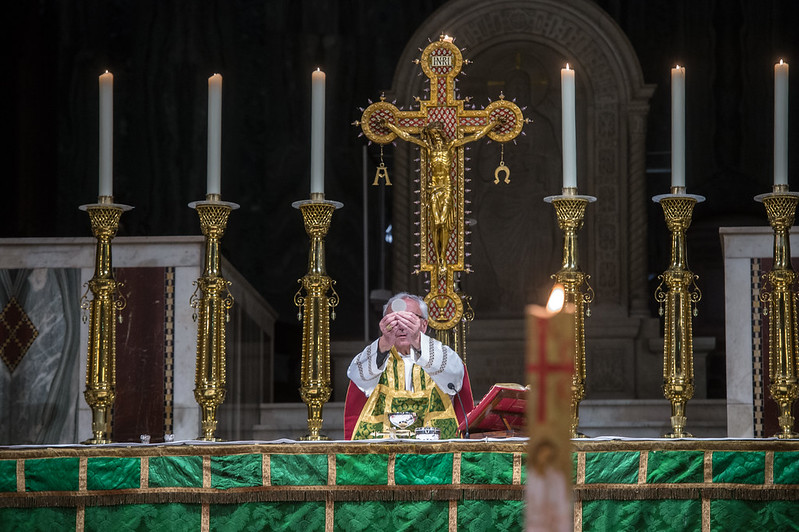 Mass in Westminster Cathedral for all who have died during the months of pandemic said by Cardinal Vincent Nichols
Mazur/cbcew.org.uk

Cardinal Vincent Nichols called on Catholics to pray for the 100,000 people in Britain who have died with coronavirus, their families and communities. Cardinal Nichols described the milestone as “a day of great sadness all over the land”.

Chris Pearson, chair of the National Catholic Safeguarding Commission, has died with Covid-19. As well as leading the NCSC through significant developments in safeguarding policy over his two terms in office, he both worked for and volunteered with the NHS.

Minster Abbey, a Benedictine abbey in Thanet in Kent that was first founded in the seventh century and refounded in 1937, has won an online competition dubbed the Medieval Abbey World Cup. The final round of the Twitter contest, which pitted medieval abbeys against each other in a series of public votes, saw Minster compete against Cluny Abbey in France, Mar Mattai Monastery in Iraq and Monkwearmouth-Jarrow in Tyne and Wear.

The famous Becket windows at Canterbury Cathedral are being reassembled after experts preparing the glass for an exhibition at the British Museum discovered that panes depicting stories from his life had been arranged in the wrong order. Mistakes were introduced when the windows were restored in the 1660s.

Canon Giles Goward, the rector of St Mary’s, Oscott, has died aged 55 after a short illness. Canon Goward took over the role in June 2020. Archbishop Bernard Longley of Birmingham, in whose diocese the seminary operates, asked Catholics to pray for his soul and the community at Oscott.

The Jesuit Refugee Service has said that holding asylum seekers in barracks puts the lives of the most vulnerable at risk to make “a cruel political point”. In a statement issued in the wake of a fire at Napier Barracks, which is being used to accommodate asylum seekers, and where there has been a significant outbreak of Covid-19, JRS director Sarah Teather said: “This gratuitous brutality is an insult to the British public whose decency and care for those in need runs a good deal deeper than ministers’ base instincts.”

Bishop Kevin Doran led tributes to the Ursuline Sisters at a Mass to mark their 250 years of work in Ireland this year. In his homily at Sligo Cathedral on the Feast of St Angela Merici, the Bishop of Elphin said the Ursulines had been “an integral part of the fabric of church and civil society”. Sisters from Wales and Kenya joined the online liturgy marking the Irish Ursulines’ missionary outreach.

The leader of the Irish Church has said he feels “embarrassed and guilty over the way in which we in the Church contributed to and bolstered” a culture of concealment, condemnation, and self-righteousness at the Mother and Baby Homes and Magdalene Laundries in Northern Ireland. Speaking after the publication of a 550- page report into abuse at the homes, Archbishop Eamon Martin said many vulnerable pregnant women in crisis and their children were stigmatised, harshly judged, and treated in a cold and uncaring manner.

The Association of Catholic Priests (ACP) has urged the Irish bishops to heed Pope Francis’ call to the Church in Italy to hold a national synod. Speaking to The Tablet, Fr Roy Donovan of the ACP leadership noted the Irish bishops’ own outspoken commitment to a synodal Church, but said it was a pity that these statements were “not communicated with the conviction and passion which would evoke a real sense that change is in the air”. He said it was likely that most Irish Catholics were unaware that the bishops had “taken such a radical stance” and were “four- square behind the reform movement initiated by Pope Francis”. Speaking on St Brigid’s Day, Fr Donovan said there needed to be “equality of baptism” and “mechanisms whereby laypeople are participative agents in shaping the future Church”.

The Bishop of Salford and lead bishop on the environment, John Arnold, is to take part in a series of evening talks and reflections on ecology during Lent. The series, organised by UK participants in the Global Catholic Climate Movement, will inform and challenge participants to respond to Pope Francis’ call to care for “our common home”. The free events will take place on six Thursdays from 18 February to 25 March, 7.30-8.30p.m. To register, contact: [email protected] movement.global

The Catholic charity Million Minutes has marked its tenth anniversary with an online discussion of the charity’s achievements and hopes for the future by co-founders Danny Curtin, Nicky Pisa, Stephen Davies and Daniel Hale. Its successful awards scheme has recognised over 1,000 young people for their community service, with 30 young people being put forward for their work during the pandemic.

Cardinal Vincent Nichols and Fr Damian Howard SJ, provincial of the Jesuits in Britain, have joined calls for the authorities in India to release Fr Stan Swamy, an 83-year-old Jesuit priest who has been unjustly imprisoned because of his work to support marginalised communities. He has been imprisoned for more than 100 days “on completely unfounded charges of terrorism”. Their open letter of 26 January states: “UN representatives have expressed concern about the arbitrary arrest of Fr Swamy and the way in which the Indian state is seeking to delegitimise his peaceful work for human rights.” They “add our voices to theirs” and warn that “he is now at grave risk of contracting Covid in an overcrowded prison in Mumbai”.

Long-time peace activist Bruce Kent has written to US President Joe Biden urging the United States to stop providing Britain with the missiles upon which to put Britain’s warheads. The vice president of CND and Pax Christi England and Wales said: “It would considerably speed up the nuclear weapon elimination process if the United States ended the supply of these missiles to Britain.” He added that the history of accidents involving nuclear weapons was “long and frightening” and that the billions spent on Britain’s nuclear weapons system “would be much more usefully and sensibly spent on our National Health Service”. The call comes after the Treaty on the Prohibition of Nuclear Weapons came into effect in January.