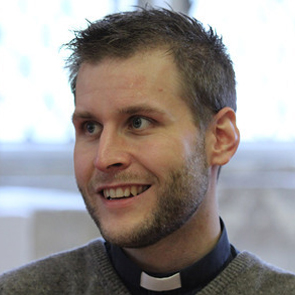 The first prior of the Community of St Anselm at Lambeth Palace, which will bring together young Christians of all denominations for about a year, was announced by the Archbishop of Canterbury this week.

Revd Anders Litzell, 34, grew up in the Swedish Pentecostal Church and was ordained in the Church of England in 2012, Mr Litzell. During undergraduate studies in the US he discovered ‘high church’ Anglicanism and back in Sweden he served in a  Lutheran parish in Stockholm, while directing the Alpha Sweden office.

Mr Litzell He said that in February he would be inviting applications from people aged between 20 and 35 for the 16 residential positions, and the 40 non-residential ones.

“Around 400 people have subscribed online for updates. Those who join will be committing themselves for nine or 10 months – one academic year – so it’s a bit like a novitiate, but it’s not a novitiate,” he said.

The community, which will be housed in the former servants’ quarters in Lambeth Palace, will follow the Rule of St Benedict, the father of Western Monasticism.

“It’s going to be a new way of monastic life … and yet there’s nothing new about it at all, because it’s following centuries of tradition,” said the Mr Litzell.

The Archbishop of Canterbury will be the abbot and will spend time in prayer with the community when he is resident at Lambeth.

“In the community we will eat together, pray together and study together – and we will undertake active service, serving one another in community by growing our own vegetables, for example. But we will also be going outside the walls and undertaking service in the community in London, among those less fortunate than ourselves,” said Mr Litzell.

He added that the community has enough funding to start up, but he would be hoping for partnerships with funding organisations, and community members would be required to contribute financially as well.

The community’s members will be chosen by Easter, and will move in by September next year.