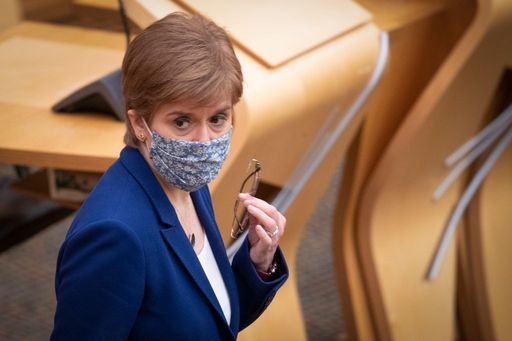 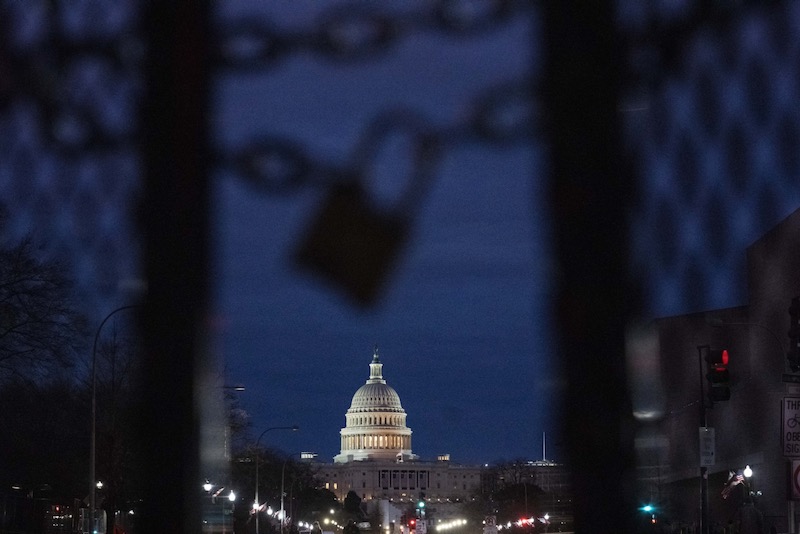 Up to 25,000 National Guard members have been authorised for the city to ensure the security of tomorrow's inauguration
Liu Jie/PA

Thirteen minutes of edited video, shot by war correspondent Luke Mogelson for the New Yorker, gives an unprecedented glimpse into the surreal scenes that occurred during the Capitol riots.

Protestors were seen rifling through senatorial documents looking for “evidence”, with one phone toting protestor muttering to himself “there’s got to be something here we can f****** use against these scumbags”; nearby others argued about the optics of their behaviour and winning the “information war”.

While amateur sleuths “investigated” and argued on the senate floor, a man in a Viking helmet and wielding a US flag made animalistic noises and uttered loud profanities in the gallery above, as a member of the press took his picture. The men on the Senate floor finally settle their debate: “I think Cruz [Senator Ted Cruz] would want us to do this, I think we’re good.”

Outside, Mogelson captured the moment the protestors storm the Capitol. Moments before they had erected a noose and had been chanting and screaming at the police outside the building, a shout goes up and the crowd roars joyously up a ramp as a small number of police struggle ineffectually to hold the mob back. One protestor is heard crying: “F*** you police”.

The camera follows a group of protestors through a window into the Capitol building where a crowd is chanting: “Whose house? Our house!”

They are blocked by a group of nervous looking cops in masks who are menacingly told: “You’re outnumbered. There’s a f****** million of us out there and we are listening to Trump – your boss”. The police back away nervously allowing the protestors to walk leisurely on into the building. “We love you guys – take it easy,” they reassure the police as they file past. They continue to advance through the building with shouts of “treason!” echoing through the halls of Congress.

Protestors mill through the corridors banging on doors and looking for politicians with sarcastic cries of “knock, knock! We’re heeere!”. With no members of the house or senate in evidence others demand “where the fuck are they?”. Another protestor suggests “whilst we’re here we might as well set up a government”. One protestor takes Mike Pence’s seat but is asked to vacate it by another protestor wearing full combat gear: “I love you guys, you’re brothers, but we can’t be disrespectful”.

Capitol police are seen trailing after protestors attempting to gently persuade them to restrain themselves, with one especially bizarre scene of a policeman trying to reason with the man in a Viking helmet as he poses for another photo on the senate floor. The group eventually agree to leave, saying “we love the cops” but not before leaving a note reading “it’s only a matter of time, justice is coming” on the desk of the Vice President.

Finally, and in perhaps the day’s most surreal moment, the protestors gather with the man in a Viking helmet behind the desk as one of them leads the group in prayer: “Jesus Christ, we invoke your name. Amen!”

The “Viking” taking to the idea continues the prayer as those around him kneel and bow their heads: “let’s all say a prayer in this sacred space. Thank you heavenly father for gracing us with this opportunity.”

Pausing to respectfully remove his helmet he continues: “Thank you for this opportunity to stand up for our God-given unalienable rights. Thank you heavenly father for getting the inspiration needed to these police officers needed to allow us in this building; to allow us to exercise our rights; to allow us to send a message to all the tyrants, the communists and the globalists that this is our nation not theirs; that we will not allow the American way of the United States of America to go down; thank you…for filling this chamber with your white light of love; with your white light of harmony; thank you for filling this chamber with patriots that love you and that love Christ…thank you for allowing us to get rid of the communists, the globalists and the traitors within our government. We love you, we thank you, in Christ’s holy name we pray!”

The video concludes with protestors milling around outside the Capitol, where one man calls for the crowd to “make a list, put all those names down, and we start hunting them down one by one.” This is greeted enthusiastically by the protestors with cheers and another man shouting, “traitors to the guillotine”.

A very different scene, and a very different prayer, unfolded earlier in the day, as described by Rear Admiral Margaret Grun Kibben, chaplain to the US House of Representatives. The former Chief of Navy Chaplains, Margaret responded calmly and decisively to the evacuation of the Capitol, looking after the confused and distressed representatives as they lined up: “My concern was to keep an eye on who was frightened, who was struggling, so that I could come alongside them — and there were a few under duress.” Kibben led them in prayer, praying for both the Representatives and the protestors, and quoting Psalm 46: “God is our refuge and strength, a very present help in trouble. Therefore we will not fear, though the earth should change, though the mountains shake in the heart of the sea.”