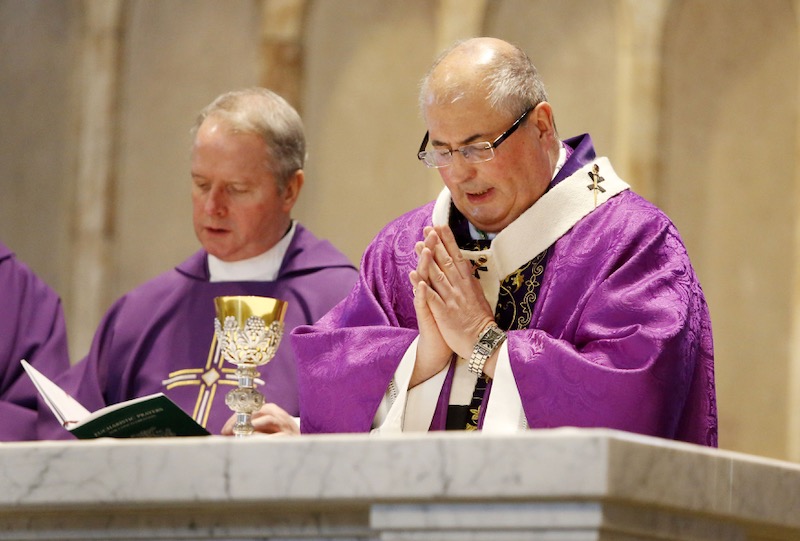 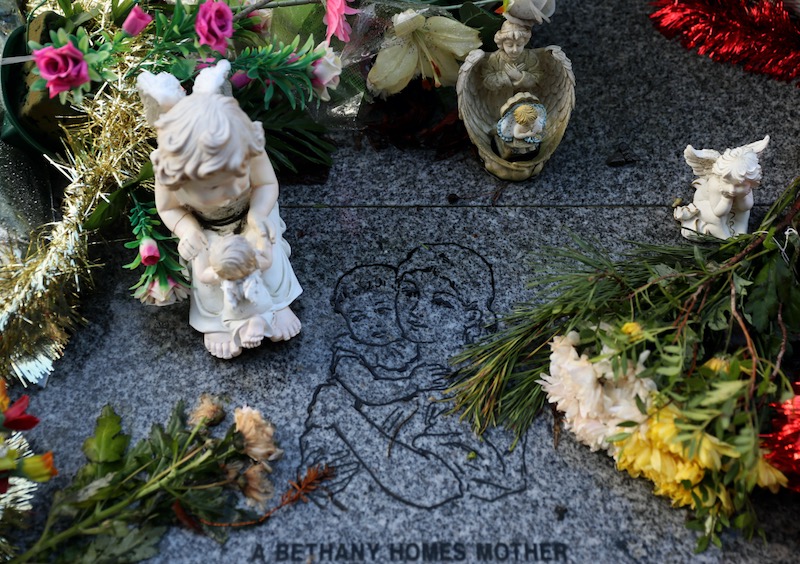 Flowers and figurines at the memorial to 222 children from the Bethany Mother and Child Home, at Mount Jerome Cemetery, Harold's Cross, Dublin.
Brian Lawless/PA

The head of the Catholic Church in Ireland has asked all in positions of leadership in the Irish Church to study the findings of an investigation into Mother and Baby Homes, many of which were run by religious congregations.

In its report, the Commission to Inquire into Mother and Baby Homes details the harsh conditions and emotional abuse suffered by some of the 56,000 unmarried mothers and 57,000 children who lived in 18 institutions over the period 1922 to 1998.

The five-year investigation reveals very high infant mortality rates totalling 9,000 deaths over the 76-year period. The death rate in the year 1945-46 was almost twice that of the national average.

One section of the report is devoted to the testimonies of women who spent time in the homes and the children born there and these accounts expose the culture of isolation, secrecy and social ostracising which faced unmarried mothers and their children.

Describing these personal testimonies as “courageous” Archbishop Eamon Martin said people in the Irish Church must ask, “How could this happen?”

Archbishop Martin said: “As a Church leader today, I accept that the Church was clearly part of that culture in which people were frequently stigmatised, judged and rejected. For that, and for the long-lasting hurt and emotional distress that has resulted, I unreservedly apologise to the survivors.”

He said the Church must find ways of reaching out to survivors who had shown determination in bringing to light this dark chapter in the life of the Church and society in Ireland.

The report, he said, makes clear that many are still learning about their personal stories and searching for family members. “The rights of all survivors to access personal information about themselves should be fully respected and I again urge the State to ensure that any remaining obstacles to information and tracing should be overcome.”

One of the commission’s recommendations is that children who were adopted should have a right to their birth certificates and birth information while a mechanism could be put in place to allow for a birth mother who wishes to retain her privacy. The records of the institutions should be held in one central repository, the report said.

Elsewhere in his statement, Archbishop Martin noted that the commission believes that there may be people with further information about infant burial locations at some of the homes who have not come forward.

“I appeal to anyone who can help to do so.  All burial grounds should be identified and appropriately marked so that the deceased and their families will be recognised and never be forgotten.”

Some of the religious orders who ran the mother and baby homes were strongly criticised in the report over their failure to keep records of the burials of children who died in their institutions.

The report highlights how the absence of professional staff, combined with “a general indifference” to the fate of children born in mother and baby homes, contributed to “appalling” levels of infant mortality.

The commission was unable to establish where the majority of the 923 children who died in Bessborough home in Co Cork were buried because the congregation who ran the home failed to keep a register of infant burials and burial locations, even though they kept “quite comprehensive” records of the arrivals and departures of residents.

Bessborough, which was operated by the Congregation of the Sacred Hearts of Jesus and Mary, had the highest infant mortality rate among the country’s mother and baby homes.

Responding to the findings of the 3,000 page report, the Congregation of the Sacred Hearts of Jesus and Mary, which also ran mother and baby homes in Castlepollard, Co Westmeath and Sean Ross Abbey in Roscrea, Co Tipperary, said it was “a matter of great sorrow to us that babies died while under our care”.

The congregation acknowledged that the “burial of infants and children who died while in care has understandably become a matter of immense controversy.

“We are distressed and saddened that it is so difficult to prove with legal certainty where many of these infants were buried especially with regard to Bessborough. We did everything possible including the engagement of a professional historian to assist us in our dealings with the Commission on this vitally important matter.”

The congregation said it especially wanted to recognise and accept today that “so many women who were shunned and shamed by society did not find the support and level of care they needed and deserved at such a dreadful and painful time in their lives”.

They also welcomed the announcement by the Taoiseach Micheál Martin that he would make an apology on behalf of the State in the Irish parliament on Wednesday to all those who spent time in mother and baby homes.

“For our part, we want to sincerely apologise to those who did not get the care and support they needed and deserved,” the Congregation of the Sacred Hearts of Jesus and Mary said.

At a press conference on Tuesday, the Taoiseach said that those religious orders associated with mother and baby homes should make a financial contribution to a redress scheme.

He added that it also brought to light a “warped attitude to sexuality and intimacy” with a “very striking absence of kindness” and a complete absence of Christianity, despite mother and baby homes often being run by religious orders.

“I do believe that the Church should examine this report comprehensively,” he said.

In their statement in response to the report by the Mother and Baby Homes Commission, the Daughters of Charity, who ran Pelletstown St Patrick’s on the Navan Road in Dublin, a facility owned by the Dublin Board of Guardians, said they “deeply” regretted that “we could not have done more to ease the burden and suffering carried by these women, mostly alone, as they dealt with both a major crisis in their lives and totally unjustifiable rejection”.

They said the report gave “a clear picture of the attitude and reaction of Irish society to many women who became pregnant out of wedlock. These women were isolated and shamed, without justification, and we hope that the publication of this report today will give a clearer and more complete picture of the entirety of the mother and baby homes issue in this country.”

The Daughters of Charity said residents’ personal records and the governance records that were generated in respect of St Patrick’s Pelletstown during its operation were in the possession of the public authority and Health Board since the closure of the home. “We no longer hold any related records,” they stated.

The Commission of Investigation examined the evidence relating to consent to adoption and foreign adoptions. It said it found very little evidence that children were forcibly taken from their mothers for adoption.

Some survivors on Tuesday contested this finding. The commission did, however, accept that mothers did not have much choice but to offer their children up for adoption due to the lack of family support, the stigma around being a single mother in Irish society, and the lack of any means to support their child.

Legal adoption was introduced in 1953 and by 1967, the number of babies adopted was 97 per cent of the number of “illegitimate births”. Most of the women left the mother and baby home within a few months of giving birth having placed their child for adoption.

“Mothers did have time after the initial placement for adoption to reassess the situation,” the report acknowledged.

The commission has identified a total of 13 vaccine trials on children in mother and baby homes which took place in the period covered by the Commission’s remit 1922-98. Seven of these were conducted in the institutions under investigation during the period 1934-73.

In a statement, the Association of Leaders of Missionaries and Religious of Ireland (AMRI) said it added its “heartfelt sorrow and regret for the judgemental culture of secrecy and shame that pervaded the Church, and that marginalised women and ran counter to the Gospel.”