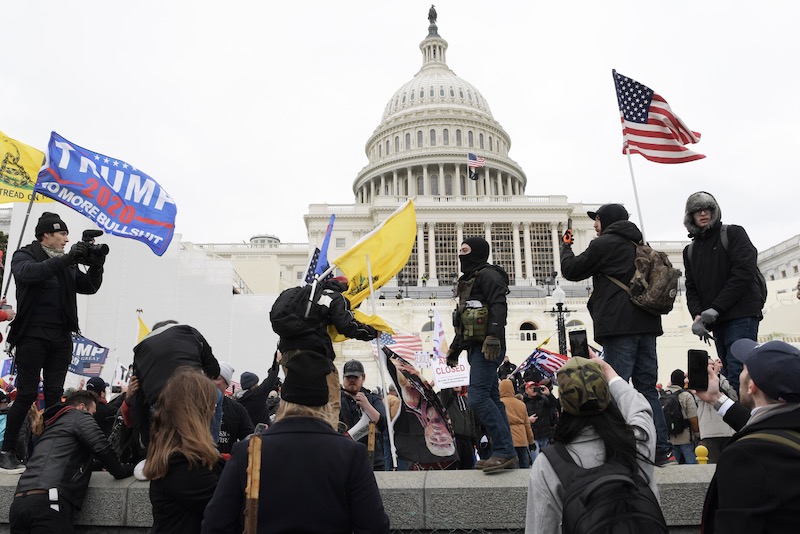 US bishops pray for peace as Capitol under siege

Cardinal Gregory – we should feel 'violated'

After a night of insurrection and riots instigated by the words of a serving president and that left four people dead, Joe Biden and Kamala Harris were finally certified this morning as the next President and Vice President of the United States.

Barry Black, chaplain to the Senate, said in his closing prayer after the certification: “We deplore the desecration of the United States Capitol building, the shedding of innocent blood, the loss of life, and the quagmire of dysfunction that threatens our democracy.”

He added:  “Words matter and the power of life and death is in the tongue.”

Condemnation grew for the unprecedented scenes on Capitol Hill.

Archbishop of Washington Cardinal Wilton Gregory said: “Our United States Capitol is sacred ground and a place where people over the past centuries have rightly demonstrated, representing a wide variety of opinions. We Americans should honour the place where our nation’s laws and policies are debated and decided. We should feel violated when the legacy of freedom enshrined in that building is disrespected and desecrated.”
Cardinal Cupich, Archbishop of Chicago, tweeted: “What has been unfolding at the Capitol today should shock the conscience of any patriotic American and any faithful Catholic. The eyes of the world look on in horror as we suffer this national disgrace... For many months we have witnessed the deliberate erosion of the norms of our system of government. Peaceful protest is a sacred right. It has been an essential component of much social progress over the course of human history.”
Even Trump's most fervent religious supporters have strongly condemned the violence with Ralph Reed, author of The Christian Case for Trump and chairman of the Faith and Freedom Coalition describing the events in a tweet as “an assault on democracy and representative government. Resort to mob violence has no place in the life of our nation, and I condemn and repudiate it. It does not represent our movement or the cause of Christ.”
However, the pro-Trump anti-abortion activist Fr Frank Pavone continued to support Trump's claims that the election was fraudulent. He tweeted: “These Democrats are hypocrites. Biden should shut up; he has no authority to talk right now. He is a fraud & he is not the president-elect. The rest of these sanctimonious, self righteous Democrats should stop complaining. They tried to steal the election & want us to accept it!”
Another Trump supporter bishop, Bishop Joseph Strickland of Tyler, Texas, was more restrained. He commented on a tweet, by Bishop of Brownsville Daniel Florest, who said: “The Gospel itself is a full-throated and stern warning against mob action. If institutions of order & lawful transitions of authority are systematically deconstructed & trampled upon by factional self-interests, it leads to just that, a mob. Let the elected govern.” Strickland said: “Thank you for these wise words....”

Church leaders spoke out amid growing calls for President Donald Trump to be removed from office under the 25th Amendment, enacted after Kennedy's assassination for use in emergencies. CNN reported that a growing number of Republican leaders and Cabinet officials believe Trump should be removed from office before 20 January and that four of them have called for the 25th Amendment to be invoked.

Trump himself, under temporary ban on Twitter, released a statement that was tweeted by White House spokesman Dan Scavino pledging an “orderly transition” of power. He repeated his inflammatory lies about the election results, and claimed his had been the “greatest first term” in American history. He also promised that this was only the beginning of the fight to “make America great again”.

Biden also condemned the violent mob of Trump supporters that stormed Capitol, and spoke about rebuilding trust as he announced appointments to the Justice Department.

Biden said: “Our first-rate nominees to lead the Justice Department are eminently qualified, embody character and judgment that is beyond reproach, and have devoted their careers to serving the American people with honour and integrity. They will restore the independence of the department so it serves the interests of the people not a presidency, rebuild public trust in the rule of law, and work tirelessly to ensure a more fair and equitable justice system.”