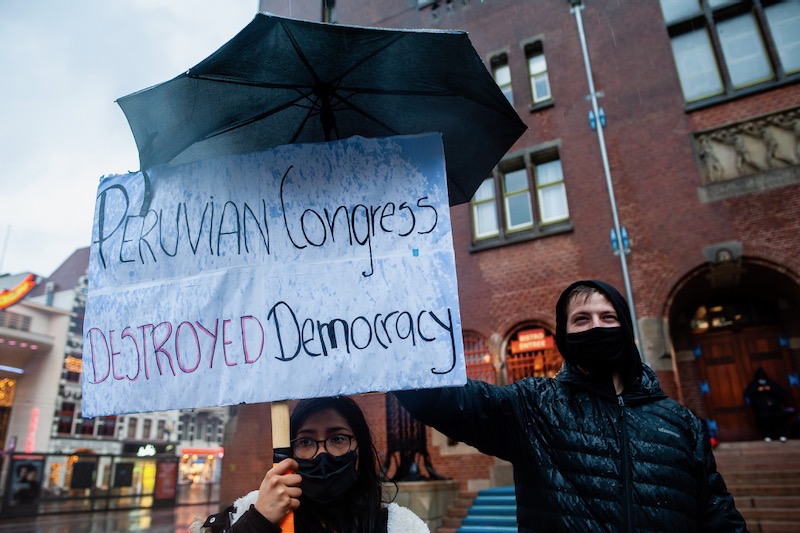 Peru gets third president in a week 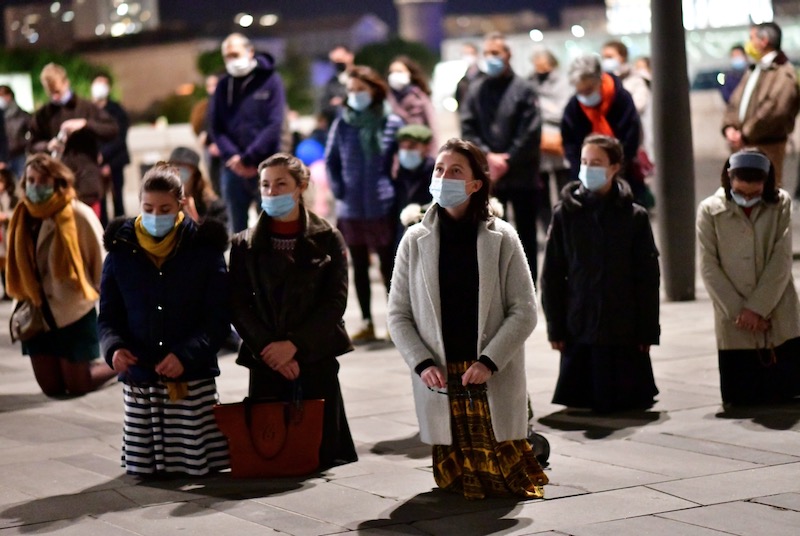 Catholics protest peacefully outside the cathedral in Marseille, calling for Mass to be permitted in lockdown.
Georges Robert/PA

Catholics in at least 20 cities across France openly protested last weekend against a government ban on public religious services during the country’s second lockdown against the coronavirus, while Church leaders were divided on how to proceed.

Parishioners assembled in front of cathedrals or in city squares, some singing hymns and kneeling in prayer, which is illegal in public spaces. All insisted the Eucharist was as essential to them as was the food that shops could sell or the teaching pupils received in schools now.

The government insisted that religious services, even with social distancing, could spread the virus and thus were not allowed now. Some clergy sided with the protesters, while most urged understanding for the ban.

Paris banned a protest planned last Sunday outside the large Saint Sulpice church after protesters held an unauthorised meeting there on Friday evening.

The bishops’ conference accepted the restrictions “with sadness” and urged Catholics to avoid illegal protests. Its spokesman Vincent Neymon tweeted: “We are not a rebellious religion.”

Interior Minister Gérald Darmanin reacted firmly: “I don't want to send police and gendarmes to issue fines to believers outside a church, of course. But if this is repeated and is clearly against the law, I will do it.”

Darmanin met on Monday with religious leaders, who are divided because other faiths have not joined the Church in demanding public services. Houses of worship are open for individual prayer and can hold services without a congregation for broadcast over the internet.

Archbishop Éric de Moulins-Beaufort, head of the bishops’ conference, has accepted the government’s decision but urged it to negotiate the conditions for ending the ban with faith leaders, especially in view of the upcoming Christmas season.

Some bishops have gone further and criticised the protesters. “I would prefer that Catholics show they are bearing their share of suffering in these difficult times and that they overcome this feeling of injustice.” said Valence Bishop Pierre-Yves Michel.

About 500 Catholics protested in the rain outside the city opera in the Atlantic port of Nantes amid shouts of “give us back our Mass” and chants of hymns. In Bordeaux, about 300 met outside the cathedral, some kneeling in prayer.

“If you deprive people of the Mass, you deprive them of the most fundamental thing,” a young priest attending the protest said.

Some politicians have backed the protests. Gérard Larcher, the Senate head from the centre-right Republicans party, said attending Mass was a basic freedom and “the government must be attentive to it.” Far-right leader Marine Le Pen said religious services were “important support in these moments of great tension and anguish”.

Recent current events, including the murders of Catholics by a radical Islamist in Nice and an expected law against “Islamist separatism” that might limit freedoms of all religions in France, seemed to feed apprehensions among the protesters.

This was evident in a petition to President Emmanuel Macron entitled “For the Mass”, which has received almost 106,000 signatures so far.

“At a time when the Catholics of this country are being targeted, we want to bury our dead, baptise our children, accompany our sick, be close to our priests,” it said.  “So please let us have Mass! For many of us, it is an essential renewal … for all, it is a freedom. It must remain so.”