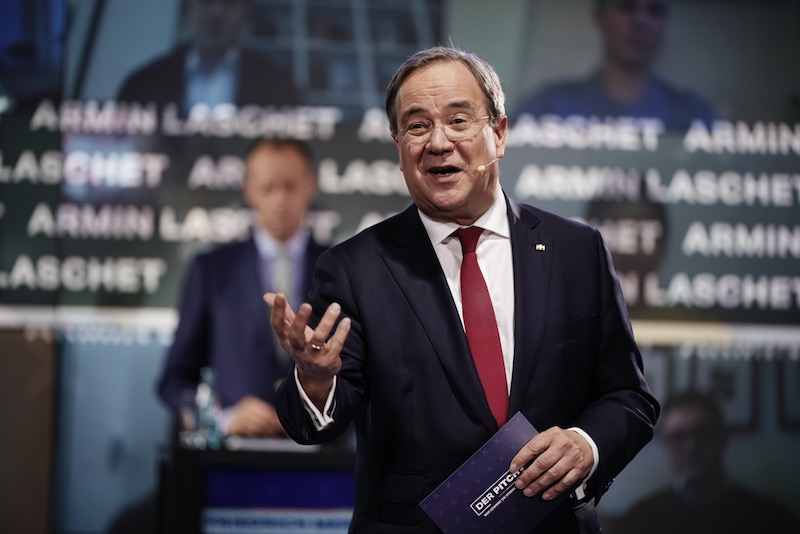 Moves to heal rift between Vatican and German Church 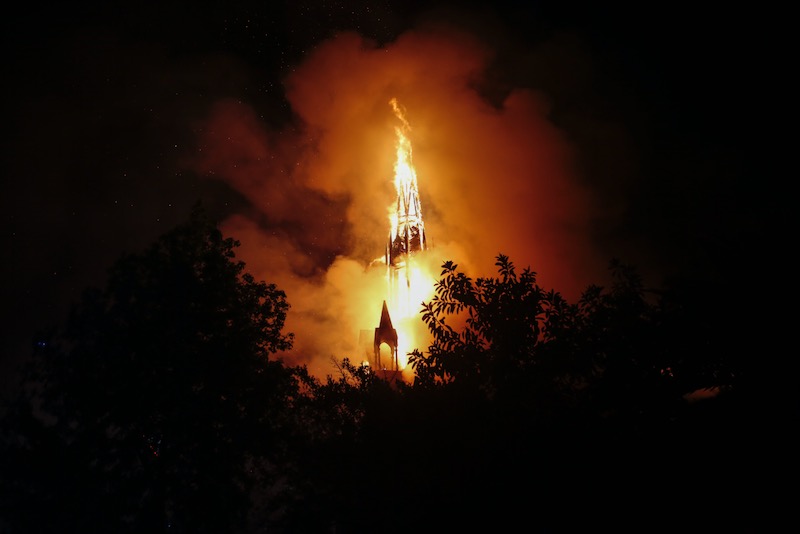 The Catholic Church was caught up in widespread street protests in the Chilean capital Santiago last weekend, which are associated with the referendum due on Sunday on the rewriting of the country’s Pinochet-era constitution. Two churches were torched and one burned to the ground while onlookers cheered. It was unclear why the two churches – the Assumption of the Virgin Mary and the parish of the Carabineros, Santiago’s police force – were targeted. Some observers cited popular anger over Chile’s massive clerical sexual-abuse scandals, while others thought all national institutions including churches were seen as “legitimate” targets. At least five people have been arrested for setting one of the churches ablaze, with one detained inside the church and four outside. Videos on social media showed protesters entering the back of the church, and remov- ing religious figures that were destroyed or used in barricades. The new constitution will be drafted to replace the one adopted during Augusto Pinochet’s military dictatorship that lasted from 1973 to 1990.The spark for the protest movement was a modest increase last year of 30 pesos (about 3 pence) in the cost of a subway ticket, but the protests escalated into a wider critique of the way the national economy is structured.

Easter Europe’s Catholic Church has been badly hit by the second wave of Covid-19, with churches closed or restricted to tiny congregations and bishops forced to quarantine. In Russia, the Italian-born Archbishop Paolo Pezzi, who heads the Moscow-based Mother of God Catholic archdiocese, was diagnosed with the virus last week, telling Catholics in a video message that he saw the crisis as a chance for the whole Church to dedicate itself more fully to God. The president of Poland’s bishops’ conference, Archbishop Stanislaw Gadecki, who tested positive on Saturday, wished doctors and health workers “strength and endurance”. He wrote in an open letter: “I ask that feelings of medical and human solidarity never dim in your hearts and consciences. Every sick and suffering person has a right to care, diagnosis and therapy, without feelings of isolation, disrespect and indifference.” In Slovakia, an outright ban on church services was relaxed by the government of Prime Minister Igor Matovic after a complaint from the Catholic bishops. Six people are now allowed at Masses.

Exit polls from Sunday’s elections in Bolivia have Evo Morales’ MAS party and its presidential candidate, Luis Arce, as outright winners with more than 50 per cent of the vote. The party’s main opponent, Carlos Mesa, and acting president Jeanine Áñez, congratulated the party on Monday. Opinion polls had put MAS ahead but with an insufficient advantage to avoid a second round of voting. The 2019 elections were declared void after interruptions in the count, showing Morales to be the winner, gave rise to allegations of fraud. Morales resigned and fled the country. Before the poll, the president of the bishops’ conference, Archbishop Ricardo Centellas, had expressed the hope that “all of us Bolivians will take this opportunity to give the country stability. We have gone through a year of uncertainty. It was a transition with great conflict. It is time for the country to return to stability ... to governability ... to having a government that has the support and the collaboration of all.”

The listing of the Basilica of Sacré-Coeur in Paris as a national heritage monument has provoked both Catholics and atheists in France, with the former surprised it took so long and the latter asking why the state would honour such a divisive monument. The clashing views arise from different readings of the period leading up to 1905 when the republic pushed through the separation of Church and state against the long-dominant Catholics. Historical disputes aside, the exterior of the gleaming white building has been maintained by the state since it took over all churches 115 years ago, and it has been named a national monument to allow state aid for needed work on its interior. Speaking on the occasion of the EU’s Anti-Trafficking Day on Sunday, the Vatican's representative at the Organisation on Security and Co-Operation in Europe urged tougher action by governments and greater help for victims. Addressing the OSCE in Vienna, Mgr Janusz Urbanczyk said 40 million people, a quarter aged under 18, were currently trafficking victims worldwide while one child in every 20 under eight years old is a victim of sexual exploitation.

Marking the unexplained deaths of two senior clergy in recent decades, Archbishop François-Xavier Maroy Rusengo of Bukavu said last week: “Remembering our dead, asking for justice and reparation is the best way to promote sincere reconciliation." Archbishop Rusengo called for action on the UN’s Mapping Report of human rights violations in DR Congo from a decade ago. He noted that 24 years have passed since the assassination of Archbishop Christophe Munzihirwa of Bukavu in October 1996 by invading Rwandan soldiers and 20 years since the mysterious death of his successor Archbishop Emmanuel Kataliko of Bukavu. Both were vocal supporters of human rights, justice and peace.

A new report has detailed further sexual abuse and assault allegations against Catholic musician and composer David Haas going back four decades. The US-based writer of such contemporary hymns as “You Are Mine” has been accused of sexually abusing minors, including the claim he raped a 13-year-old girl in 1979 during a confirmation retreat in the Archdiocese of Saint Paul and Minneapolis. The advocacy group Into Account published the 22-page report on 1 October which prompted Haas to reiterate an earlier apology but he denied the rape allegation. Liturgical music publisher GIA Publications announced in June that it had ended its relationship with Haas. In July, Saint Paul and Minneapolis Archdiocese notified Haas that he was banned from its institutions and his compositions would no longer be used at liturgies.

Annual statistics from Fides News, announced on World Mission Sunday, revealed that up to 31 December 2018 the number of Catholics globally numbered 1.3 billion people. This was an overall increase of 15,716,000 compared to 2017. The world percentage of Catholics remains at 17.73 per cent, aligned with broader population growth. Declines in Catholic numbers in Europe and Asia were offset by numbers in Africa, Asia and Oceania.

The new Catholic bishop of Mostar in Bosnia-Herzegovina, Petar Palic, has sharply criticised the “lack of truth and justice” in his country, warning that current inter-communal tensions reflected, in his words, a “collective Alzheimer's disease” about the past.

A Russian Orthodox bishop has appealed to Poland's Catholic Church to reopen dialogue and co-operation, by returning to a 2012 joint declaration on forgiveness and fraternity by Catholic and Orthodox leaders from the two countries, which was suspended by the Polish side because of Russian actions in Crimea and Ukraine. The Moscow Patriarchate's Bishop Serafian Amielchenkov was addressing a church conference in Lublin, Poland.

Poland's Catholic Church has agreed to the exhumation of Fr Franciszek Blachnicki (1921-1987), founder of the Light-Light Movement, to check clams he was murdered by communist secret police agents. A beatification process is under way for Fr Blachnicki

The Conference of European Churches (CEC) has lamented “violations of the humanitarian ceasefire agreed between Armenia and Azerbaijan.” The CEC endorsed a World Council of Churches statement of 12 October that strongly urged “all parties to the conflict to end all military actions immediately [and] to respect the ceasefire agreement reached in Moscow”. Fighting flared last month over the Armenian enclave in Azerbaijan, Nagorno-Karabakh. In a letter to Bishop Hovakim Manukyan, Primate of the Armenian Church in the UK and Ireland, Cardinal Vincent Nichols said: “The international community has a heavy responsibility to ensure that the violence ceases and that the peoples of the region can at last experience the peace long denied to them.”

Archbishop José Luis Escobar Alas of San Salvador, president of the Salvadoran Episcopal Conference, has thanked the government for recognising water as a public good and a human right. El Salvador’s Legislative Assembly approved the constitutional reform on 15 October.

Incessant rains in the states of Andhra Pradesh and Telangana have claimed the lives of at least 50 people, destroyed crops, and left millions homeless. Fr Bellamkonda Sudhakar, Salesian Director of the Don Bosco social work centre in Hyderabad, Telangana, said the flooding was “unprecedented in this area, and we are practically helpless”. Catholic social work teams have tried to reach slum dwellers in Hyderabad's low-lying areas whose tin sheds and tarpaulin shelters were washed away. Fr Thomas Pasala, social work director of Vijaywada Diocese in Andhra Pradesh, said resources have “dried up as we spent all that we can for Covid-19 relief work”.

Catholic educational institutes in Muslim-majority Malaysia are “an integral part of the development of the state, providing the basic foundations of education for children in rural areas”, according to Archbishop Simon Peter Poh Hoon Seng of Kuching. He is seeking government funding for Sarawak State’s 57 Catholic primary schools and seven secondary schools.

Profound disagreements within the US hierarchy broke into the open last week when Spokane Bishop Thomas Daly, in an interview with the National Catholic Register, publicly criticised a lecture delivered by San Diego Bishop Robert McElroy. McElroy argued against the “coarse” categorisations used by some conservative Catholic politicians, labelling some issues intrinsically evil and others subject to prudential judgment. McElroy pointed out that while abortion is itself an intrinsically evil act, the formulation of laws to restrict it necessarily requires the application of prudential judgment. Daly asked, “But if abortion is intrinsically evil, which Bishop McElroy admits to, how can Catholics vote for a [US presidential] candidate like [Joe] Biden?”

San Francisco Archbishop Salvatore Cordileone performed an exorcism at San Rafael Church in the northern suburb of the same name, after vandals tore down a statue of St. Junipero Serra, the eighteenth-century Franciscan missionary who established a string of missions along the California coast. Statues of the priest were vandalised this summer in San Francisco, Sacramento and Los Angeles in the aftermath of the murder of a black man, George Floyd, by white policemen.