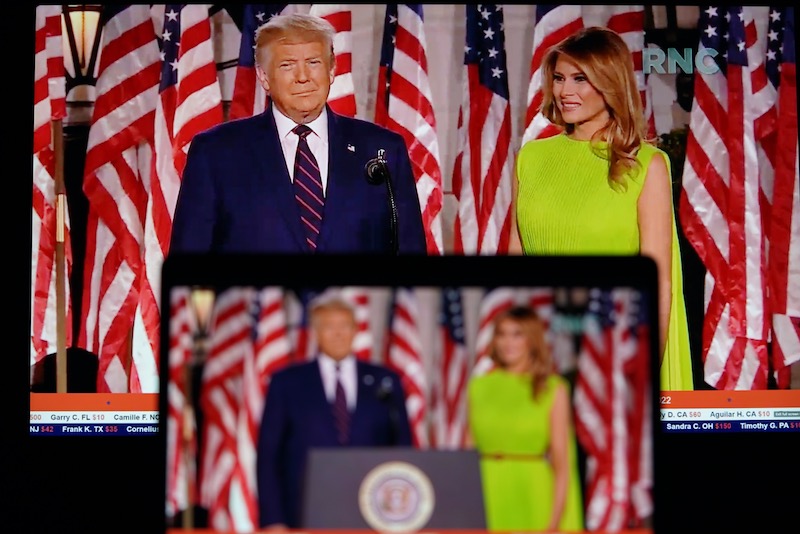 Why Covid-damaged economy is priority in US

by Christopher Lamb , in Assisi 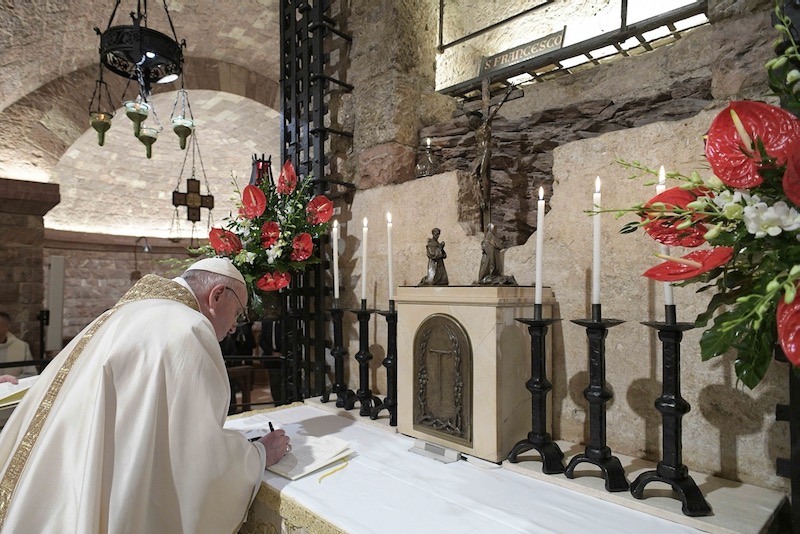 Pope Francis celebrates mass in the crypt of the Tomb of St Francis and signs a new encyclical on fraternity and solidarity in the post-Covid world, in Assisi
Vatican Media/CPP/IPA MilestoneMedia/PA Images

Pope Francis made his first trip outside Rome since the start of the Covid-19 pandemic by travelling to Assisi to sign a new encyclical expected to offer a roadmap for overcoming religious and political divisions.

The 83-year-old Roman Pontiff’s trip to the Umbrian town, the birthplace St Francis of Assisi was highly symbolic.

Francis signed the papal document on the altar at the tomb of St Francis, the 13th-century friar who dedicated his life to the cause of poverty, peace and care for creation, and who the Latin American Pope chose as his namesake. Jorge Bergoglio is the first Pope in the Church’s history to call himself after the saint from Assisi.

The signing of the encyclical, titled Fratelli Tutti, took place after the Pope celebrated a short Mass in the small chapel with around 20 people present, among them Fr Michael Perry, who, as leader of the Order of Friars Minor, is the 120th successor of St Francis.

The encyclical, which focusses on the themes of fraternity and social friendship, is predicted to cover a broad canvas of including war, globalisation, populism and economics. At a time of growing polarisation in politics, the document could also examine fragmentation and inequality. Forging closer ties between religions is also expected.

At the end of the liturgy today the Pope thanked the Vatican officials involved in the translation of the encyclical, the third of this pontificate, and which will be released tomorrow at 12.15 Rome time, the feast day of St Francis.

From the beginning of his pontificate the Pope has sought to channel the spirit of the friar from Assisi, who rejected a life of wealth to become il poverello (the poor man), whose message transcends religious and cultural borders and who was a saint who heard a call from God to “go and rebuild my church”.

Eight hundred years on and the Bishop of Rome called Francis arrived in a wet and grey Assisi on 3 October, where he was greeted by a small number of mask-wearing pilgrims who had gathered close to the town’s Basilica. The Pope made a low-key entrance in a blue Volkswagen, waving to the crowd from the car before entering the basilica. It was Francis’ fourth visit to Assisi as Pope, with the first taking place on 4 October 2013, soon after his election and a trip which sent a clear message of the direction he wanted to take his pontificate.

His latest trip to Umbria comes at a more tense period for the Francis papacy as his own battle to rebuild the Church faces both traditionalists who remain deeply hostile to his vision and a growing number of reform-minded Catholics frustrated by the slow pace of change. Meanwhile, his attempts to bring credibility to the Vatican's management of Church money saw him last week summarily dismiss one of Rome’s most powerful cardinals amid financial scandal.

The day-long visit will have come as  welcome change of scene for a Pope who has spent most of the year unable to leave the Vatican City State due to Covid-19 restrictions.

Before travelling to the shrine of St Francis, the Pope had lunch with the poor Clare sisters in Spello, a 15 minute drive from Assisi. The poor Clares are part of the female branch of the Franciscan order founded by St Clare of Assisi, who was one of the first followers of St Francis. And as he arrived in Assisi he made an impromptu stop at the Basilica of Santa Chiara (Saint Clare), in Assisi, which holds the remains of Saint Clare. His decision to visit the sisters, and the basilica ahead of coming to the tomb of St Francis comes after criticism of the encyclical’s title – which means “Brothers, all” – for its gender exclusive language.

The phrase “Fratelli, tutti” comes from the writings of St Francis and while the Vatican stressed the title includes sisters, the Pope did not want to change the saint's original words. His last encyclical, Laudato si’, also took a phrase from St Francis as its title, meaning “Praise be to you” is found in the Italian saint's song, the Canticle of the Sun.

While Laudato si’ focussed on restoring humanity's relationship with the natural world, the new encyclical looks set to offer ways for how human beings can restore relationships with one another.

One of those is between Christians and Muslims. Along with his radical poverty, St Francis is a saint of reconciliation who in 1214 met Egypt’s Sultan al-Malik al-Kamil during the crusades, and the Pope has tried to follow in his footsteps by building bridges with the Muslim world.

Speaking at a Vatican press conference to release the encyclical on 4 October will be Dr Mohamed Mahmoud Abdel Salam, a former adviser to the Grand Imam of Al-Azhar. He is secretary general of the Higher Committee of Human Fraternity, an inter-religious body established to implement a landmark inter-religious document signed by Pope Francis and the Grand Imam of Al-Azhar in Abu Dhabi in 2019.

Other speakers include Cardinal Pietro Parolin, the Holy See’s Secretary of State, and Dr Anna Rowlands, Professor of Catholic Social Thought and Practice at the University of Durham.

After the Mass and signing, the Pope met briefly with some Franciscans and sipped mate – a traditional South American tea and his favourite drink – with a friar and fellow Argentinian. He then left in his car to return to Rome.

Since 1228, nineteen Popes have visited Assisi with the record for the most number of trips held by St John Paul II who went six times.