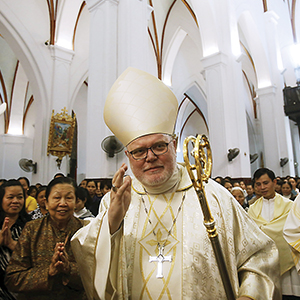 Nichols and Martin signal shifts arising from Synod on the Family

Language used at the Synod on the Family to describe gay relationships was “revolutionary”, according to Ireland’s senior archbishop, welcoming the changes signalled by the meeting in Rome last month.

The Archbishop of Dublin, Diarmuid Martin, pointed to the midway document at the synod, which called for recognition of “seeds of the Word” in couples living together and in those who are divorced and remarried. It also recognised the values in some same-sex relationships. While the final synod document did not include the “seeds” part of the mid-term text, the archbishop, speaking to the Irish broadcaster RTE, said he felt it “will not be possible” to use harsh language in regards to gays and the divorced and remarried. Archbishop Martin added that those who had “strong concerns” about the direction of the synod were a “smaller group”.

Meanwhile in his pastoral letter, read out in parishes last weekend, the Archbishop of Westminster, Cardinal Vincent Nichols, said the synod was not leading to a change in doctrine but seeking to show the “motherly love of the Church”, especially to those families in difficulty.

Cardinal Nichols also said he would soon be outlining how ordinary Catholics can play a part in the process.

This week the cardinal’s intervention to the synod, prepared well in advance of the gathering, was released. In it he wrote that the results of the questionnaire before the synod – asking Catholics about various aspects of church teaching on marriage, including gay couples, contraception and the divorced – “made clear the distances between the perceived stance of the Church in her teachings and pastoral actions on the one hand, and, on the other hand, the complexities and tensions of family experience”.

The cardinal said many are fearful of the “dark abyss of failure” that lies between church teaching and the reality of people’s lives. As a result “we both hide our failings and minimise or deny the true standard of our calling”.