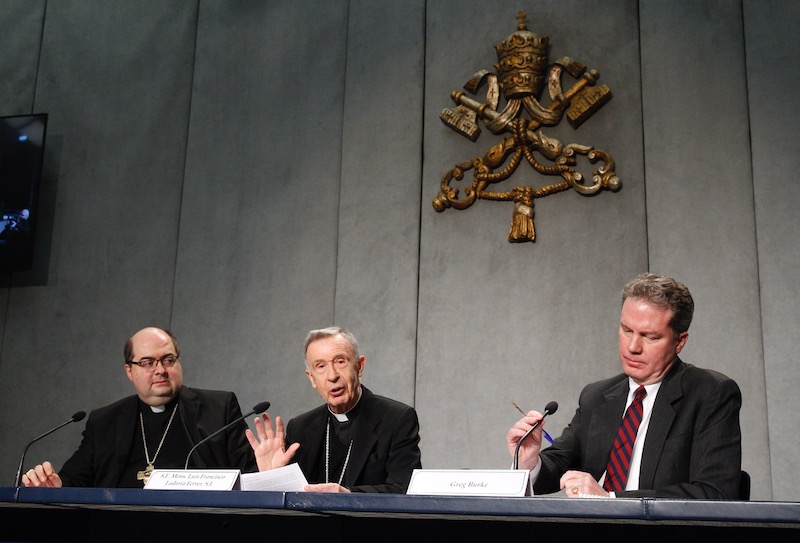 Archbishop Giacomo Morandi, left, secretary of the Congregation for the Doctrine of the Faith, with Cardinal Luis Ladaria and Greg Burke in 2018.
CNS photo/Paul Haring

Censured Redemptorist priest Fr Tony Flannery has said he will not sign a list of propositions sent to him by the Congregation for the Doctrine of Faith in June requiring him to assent to Church teaching in four areas, including the ordination of women.

The Vatican’s doctrinal watchdog sent the document to Fr Flannery, who has been out of ministry since 2012 over his views on the origins of priesthood, via the Redemptorist Superior General, Fr Michael Brehl.

It followed a letter from Redemptorists in Ireland requesting that the popular 73-year-old priest be reinstated to full priestly ministry.

In the correspondence to Fr Brehl, CDF secretary, Archbishop Giancomo Morandi writes: “After reflecting carefully upon your request, the Congregation has decided that Fr Flannery should not return to public ministry prior to submitting a signed statement regarding his positions on homosexuality, civil unions between persons of the same sex, and the admission of women to the priesthood.” A fourth area relates to gender theory.

After outlining the Church’s teaching in each of the four areas, the CDF correspondence continues: “The Irish Provincial should ask Fr Flannery to give his assent to the statement by providing his signature in each of the places indicated.”

The Curial official underlines that only after Fr Flannery signs and gives his assent to the teaching will “a gradual readmission” to the exercise of public ministry be possible by way of an agreement with the Congregation. The letter from Archbishop Morandi concludes: “Furthermore, given the fact that he has stated numerous times that he is not a theologian, he should be asked to not speak publicly on the above-mentioned topics which have caused problems in the past.”

Speaking to The Tablet about the CDF correspondence, Fr Flannery said he was “quite gobsmacked” by the tone because it was “so redolent of the 19th century”.

He stressed that he could not sign the propositions as outlined.

“For me to sign a document that I submit that women can never be ordained priests in the catholic church would be a total lie. I just could not live with myself if I signed that document. There are bishops – the German bishops for instance – many of whom have come out in favour of the ordination of women. It is very much an open question in the church now.”

Criticising the CDF’s handling of his case, he commented, “One would wish that they would have the decency to treat me as a human being and correspond directly with me and give me a chance to state my situation, but they don’t do that sort of thing,” he lamented.

Expressing himself as “disappointed and saddened”, the Redemptorist added, “I see this as the end of the road for me and ministry. For whatever is left of my life, there is no possibility of any form of official priestly ministry and I‘ve just got to live with that.”

He also expressed surprise at the tone of the CDF’s response at a time when Pope Francis is urging a church of mercy and openness.

“I think the big mistake was made by Michael Brehl, the superior general of the Redemptorists. He should have bypassed the CDF. By going to them with the letter he got from the Irish Redemptorists he was actually handing the power back to them. From the little that I know about the Vatican, the CDF is being bypassed all over the place. But Michael Brehl wouldn’t do that, and I was very disappointed that he wouldn’t,” Fr Flannery said.