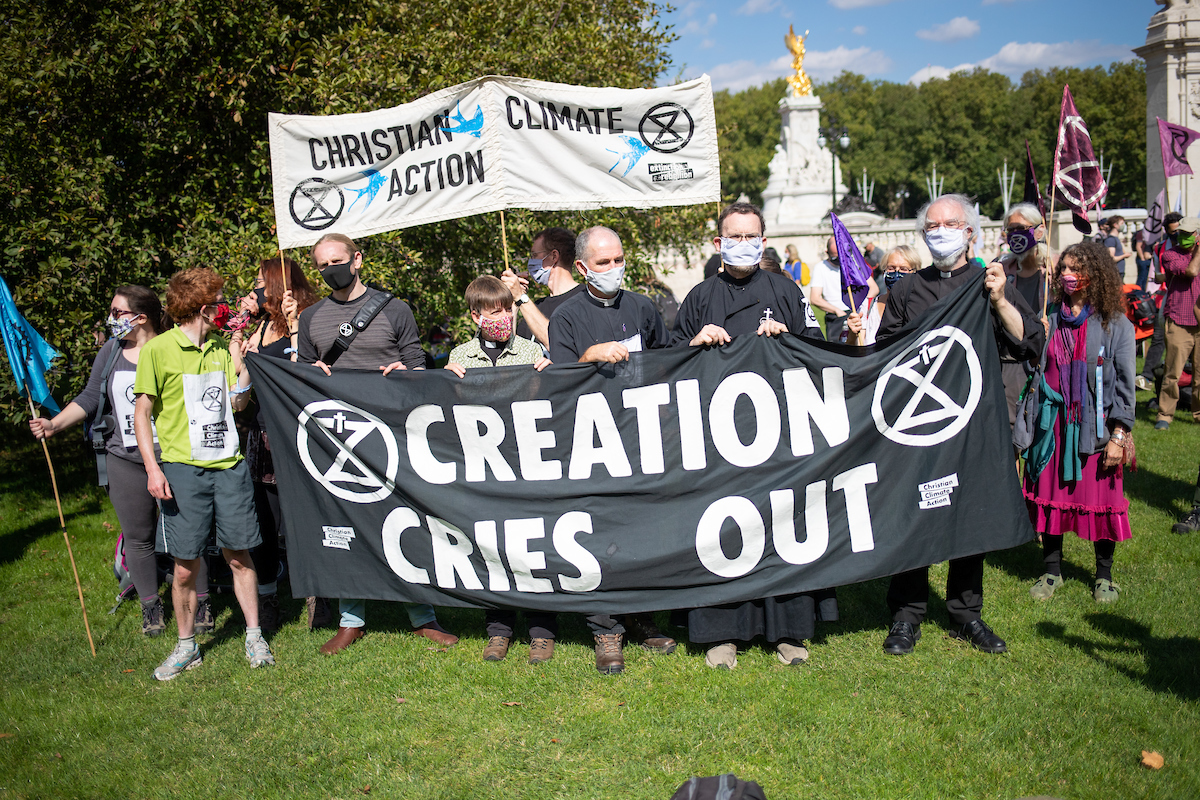 Sue Hampton, a Quaker, was among dozens of people arrested during a blockade outside a printworks in Hertfordshire that prevented some copies of The Sun, The Daily Telegraph, The Daily Mail, The Times and the Financial Times from reaching newsstands. She was charged with obstruction of the public highway.

The Metropolitan Police told The Tablet on Monday that there had been 577 arrests to date in relation to the recent Extinction Rebellion protests.

Peace protester Fr Martin Newell, CP, was charged with a breach of Section 14 of the Public Order Act offence on Tuesday for sitting in the road around Parliament Square at the end of a CCA march that had begun at Buckingham Palace.

During the march, the former Archbishop of Canterbury, Rowan Williams, joined clergy in holding a banner that read: “Creation cries out”. He told CCA: “We’re at a remarkable moment of opportunity. People are talking about building back better. We have to take the opportunity. It’s not just recovering what’s been lost but building again something that is genuinely more sustainable.”

CCA has been hosting ecumenical services and a round-the-clock prayer vigil, as well as members joining in the main protests.

Rev Sue Parfitt, 77, an Anglican vicar from Bristol, was charged on the second day of protests last Wednesday for obstructing the highway at Parliament Square after a Section 14 order had been imposed there, and Methodist minister Revd Mark Pengelly was arrested for wilful obstruction of the highway during a protest on Lambeth Bridge on Thursday.

After his arrest, Fr Newell was taken to Brixton Police Station and held overnight. He later told The Tablet he had joined the protests because “we’re in a climate and environmental emergency … we’re called to protect God’s earth as Christians, to be stewards of this garden planet that God’s given us rather than … destroying it.” He said he had felt encouraged to take part by Pope Francis’ encyclical on the care for creation, Laudato Si’. He said the climate emergency was “much more serious” and “equally urgent” as the coronavirus pandemic.

Bishop Paul Hendricks, an auxiliary bishop in Southwark, joined a CCA ecumenical prayer service on Tuesday outside Methodist Central Hall. He told The Tablet that while he didn’t support Extinction Rebellion’s use of civil disobedience, “it is something we ought to be joining other Christians in praying about and reflecting on … so many of us haven’t grasped the urgency of climate issues and global warming.” The Anglican Bishop of Reading, Olivia Graham, attended a socially distanced opening ceremony held by CCA outside St John’s church, Waterloo, on Monday evening.

The five lay members of CCA who were arrested during the protests included Anglicans, a Quaker, and a Catholic, Gill, who declined to give her surname, but said she had wanted to join the protests because care for the environment was “basic Catholic teaching”. The other four protestors were either charged or released under investigation for public order offences or obstruction of the highways.