Pope reveals why he said 'no' to married priests

Catholic schools in Hong Kong have also been asked to respect the new law and 'promote patriotism'. 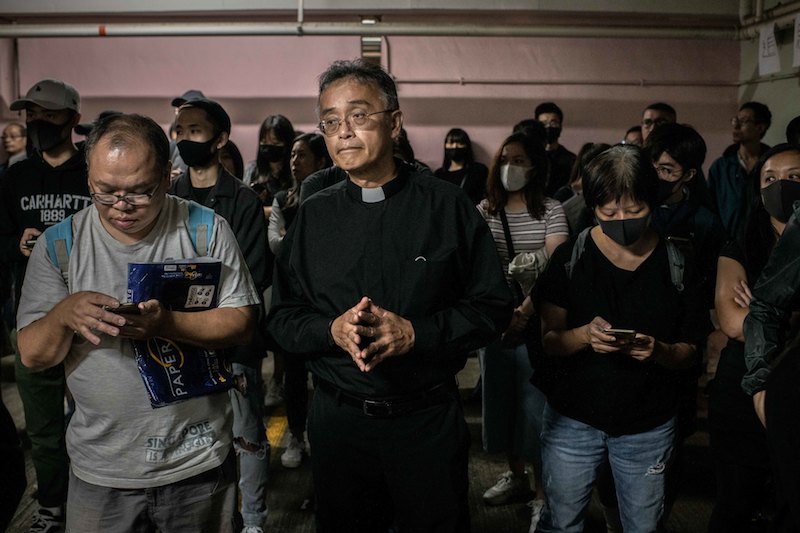 A Catholic priest at a religious ceremony in the memory of Alex Chow, a student who died during a demonstration on 8 November 2011
SOPA Images/SIPA USA/PA Images

Hong Kong priests have been asked to avoid “instigating hatred and social disorder” by their diocese, in an apparent response to the implementation of the recent National Security Law in the city.

A letter issued to priests by Cardinal John Tong Hon, the current administrator of the Hong Kong diocese, stressed that homilies should not “convey the preacher’s personal views (such as his own view on a social or political issue) but God’s message”.

The Cardinal noted, however, that “homilies should not lose touch with our daily life and the concrete situation of society”.

He said: “In a critical time like today, our faithful are hoping to hear something comforting, constructive and encouraging from the preachers during the liturgy.”

Hong Kong has been swept by civil unrest for over a year, as a pro-democratic opposition protested a perceived dilution of Hong Kong’s autonomy in the streets. Although the coronavirus pandemic has driven many residents inside, demonstrations have continued over the past few months. The new National Security Law, approved 30 June by the Chinese National People’s Congress, contains broad provisions for the punishing of “sedition”, “terrorism” and “subversion”. Opposition campaigners fear these vaguely-defined crimes could be used to prosecute any dissent whatsoever.

The legislation has divided the Catholic Church in Hong Kong, with some figures urging defiance of the new law – but others, including the current leaders of the church, supporting a more cautious approach. Cardinal Joseph Zen, the former Bishop of Hong Kong, has declared his willingness to be arrested and imprisoned under the new regulations, and some Hong Kong Catholics are active in the opposition movement. Cardinal Tong and other diocesan leaders have asked Catholic institutions to comply with the new law, however, and have balanced emphasising their support for basic freedoms with clearly stating their intention to obey the new provisions.

Last week, this approach led the diocese to ask an affiliated campaigning group, the Hong Kong Justice and Peace Commission, to withdraw a planned prayer campaign. The initiative involved crowdfunding money to place a prayer clearly critical of the Chinese government in an opposition newspaper. The diocese told the Justice and Peace campaigners that both the method of fundraising and the wording of the prayer were considered inappropriate.

The Hong Kong diocese ministers to over half a million Catholics resident in the city, and enjoys freedoms not shared by mainland Catholics, such as the right to run schools and nurseries. 150,000 students are educated in Hong Kong Catholic educational institutions; the diocese has sent letters to teachers and staff at all such institutions requesting that they respect the new security law and “promote patriotic values”.