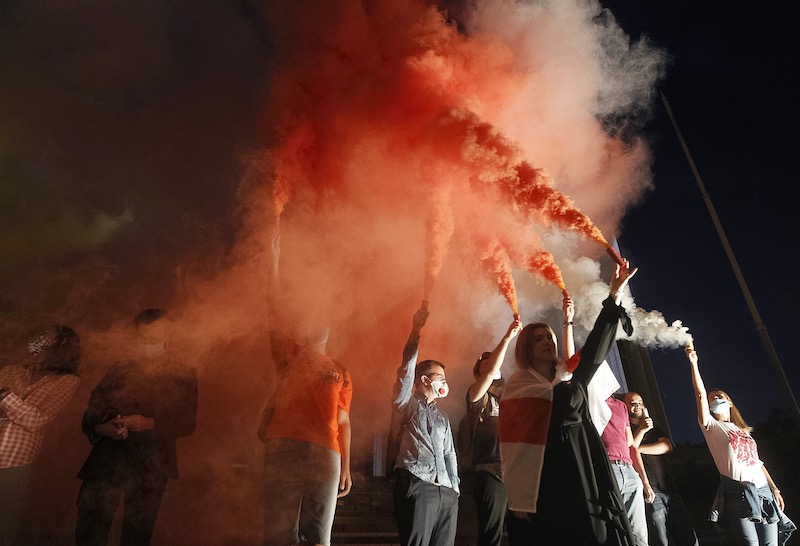 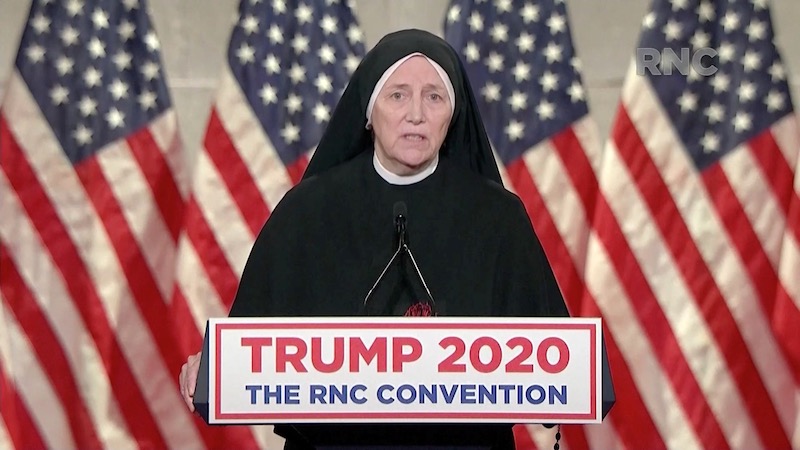 On the final day of the four-day virtual Democratic National Convention on Thursday last week Joe Biden, 77, accepted the party’s nomination as its presidential candidate. He delivered his acceptance speech from his hometown in Wilmington, Delaware. “The current president has cloaked America in darkness for much too long,” he said. If Mr Biden wins on 3 November he will be the first Catholic president since John F Kennedy (1961-63). Catholic priest Fr James Martin SJ and religious sister, Simone Campbell SSS, addressed the Convention on its final evening. A rabbi and an imam also offered prayers for Mr Biden. Referring to the widely reported financial and other connections between the Biden family and Beijing, President Trump reacted to the acceptance speech by saying that China will “own” the United States if Mr Biden wins the election. “China was never mentioned in any way, shape or form,” Trump said. “China will own our country if he gets elected.”

The number of adult baptisms in Belgium has grown steadily for a decade and catechumens whose baptism was postponed by the pandemic will soon be welcomed into the Church, the Belgian bishops’ conference said (reports Tom Heneghan in Paris). “In 2010, there were 143 [baptisms], five years later 180, and this year 305,” it said in a statement.  Tournai diocese near the French border led this year’s list with 127 baptisms, followed by Mechelen-Brussels archdiocese with 93 and Antwerp with 23. The pandemic delayed the traditional baptisms at Easter. “Now that we can celebrate again and the holiday period is almost over, the catechumens who have prepared this year are going to be baptised all over the country,” it said. Belgian Church statistics show there are now more lay people than priests in decision-making positions in the Church, a total of 2,038 against 1,940 clerics. Women make up a 55 per cent majority in decision-making posts.

A Catholic bishop in southern India has launched an international campaign seeking justice for a 14-year-old Catholic girl in Pakistan after a High Court approved her marriage with a man who allegedly abducted her four months ago. Bishop Jacob Muricken, auxiliary bishop of Palai, said the High Court in Lahore failed to consider that Maria Shahbaz was a minor and “was abducted and forcibly converted to Islam and then married to her tormentor”. Media reported that eyewitnesses in the court saw Maria in tears when this ruling was announced. “The girl is poor and comes from a minority Christian background,” the bishop said. The campaign website is here.

Fires in the Brazilian Amazon and the Pantanal,the world’s largest wetland, are on the rise. President Jair Bolsonaro implemented a ban, but enforcement of environmental law since the start of the Covid pandemic has been hampered. The current pace of fires recorded by Brazil’s national space research agency, INPE, is even higher than last year, when Amazonian fires caused international outrage. The Brazilian Conference of Catholic Bishops is part of the “Amazonizar-se” campaign that is calling attention to the situation.

The French Church estimates almost one-third of practising Catholics have not returned to Mass since the springtime pandemic lockdown was slowly eased. Mgr Patrick Chauvet, archpriest of Notre Dame cathedral in Paris, told FranceInfo radio: “They’re probably afraid of transmission of the virus.”

Cardinal Maurice Piat of Mauritius has saluted the response to the 25 July oil spill in his country, describing it as evidence of the ecological conscience of the people of the Indian Ocean Island “that emerged in the effort to save what was still possible to save”. The Japanese-owned MV Wakashio struck a coral reef at Pointe d’Esny while ferrying 4000 tonnes of oil.

Former Bishop of Wheeling-Charleston West Virginia Michael Bransfield has published an apology for his alleged sexual and financial misconduct during his 13-year tenure. He also reimbursed the diocese $441,000 for “certain expenditures that have been called into question as excessive.” Bransfield reportedly took private planes on personal vacations, paid for fresh flowers at his office daily, and spent millions of dollars refurbishing the bishop’s residence. He was accused of harassing seminarians and young clergy. Both the apology and the reimbursement were ordered by Pope Francis.

Homeboys Industries, a ministry started to help former gang members in 1988, has received the prestigious Humanitarian Award from the Conrad N. Hilton Foundation, which comes with a $2.5 million prize. In accepting the award, founder Fr. Greg Boyle S. J. said it “strengthens our resolve to create a community of kinship and healing in Los Angeles”.

An abortion carried out on a 10-year old girl pregnant after being raped since the age of six by an uncle has created controversy in Brazil. The president of the bishops’ conference. Archbishop Walmor de Azevedo, said the rapes and the abortion were “two heinous crimes”. Recife theologian Sr Ivone Gebara responded: “It is sad to see how you take intransigent positions in the face of some real human female sufferings.”

The president of the Jewish community in Graz, Austria’s second largest city, was attacked outside the synagogue on 22 August, after pieces of concrete had been thrown at the synagogue’s windows and the walls smeared with pro-Palestinian slogans. “The repeated attacks on the synagogue in Graz horrify me. My first thoughts are with Rabbi Elie Rosen. Antisemitism must never again be allowed to occur in Austria,” Cardinal Christoph Schönborn tweeted. The president of the Muslim Community Ümit Vural sharply condemned the attack and declared solidarity with the Jewish community.

A 44-year-old man was sentenced to 25 years in prison for murdering and raping a nun in northern Portugal. The killing of Sr Maria Antónia Guerra, 61, of the Servants of Mary Ministers to the Sick, who was known affectionately as Sister “Tona”, and often seen driving around on her scooter, shocked the country last September.

South Korean President Moon Jae-in hosted a luncheon last week with leaders of the Catholic Church in which he urged religious leaders to play a prominent role in combating the spread of the coronavirus. Seoul has closed its churches again after a new wave of coronavirus cases. The hotbed of infection is the evangelical Sarang Jeil Church, but it claims to be a victim of a witch hunt. Its leader Jun Kwang-hun is now ill with the virus after he ignored restrictions on gatherings to lead an anti-government rally in Seoul on 15 August.

The shooting dead of a 39-year-old Church human rights activist has been called, “a clear mark of the shameless immorality of the Philippines,” by Bishop Gerardo Alminaza of San Carlos.  Zara Alvarez, who worked with marginalised rural groups in his Negros diocese, was gunned down on 17 August in Bacolod City. Her colleagues fear it was most probably an extrajudicial killing carried out by state agents.

Catholic agencies are responding to record flash floods and landslides in the southwest state of Kerala in India, which have left hundreds dead and hundreds of thousands more displaced after August rains late in the monsoon season broke three dams and river banks. overflowed Flooding has obliterated most crops, cut off access to the forests, and left drinking water contaminated.

Speaking after the first Baptism in his damaged Beirut Church on 15 August following the huge explosion at the Port of Beirut 11 days earlier, Maronite Father Elia Mouannes, parish priest of Mar Mikhael Maronite Catholic Church, said: “It’s a sign that the Lord is here and this baptism is giving me a lot of joy and hope.” He hoped baby Simon would “be one of these people in the future who will give a new face for Lebanon and for the whole world.” Fr Mouannes was in the church at the time of the explosion on 4 August.

The pope named a temporary administrator to run the Gdansk archdiocese after accepting the resignation of Archbishop Slawoj Leszek Glodz on his 75th birthday. Glodz was featured in one of the devastating recent documentaries about priestly sex abuse and cover-up in Poland that have sparked popular demands for a reckoning.